Jatniel Hernandez fills syringes with Covid-19 vaccine booster shots on April 6, 2022 in San Rafael, Calif. About four in 10 employers have some type of Covid-19 vaccine mandate for their workers, a new survey out Wednesday shows.
(Photo by Justin Sullivan/Getty Images)

About four in 10 employers have some type of Covid-19 vaccine mandate for their workers, according to a survey by Littler Mendelson P.C., marking a huge increase from the last time the management-side law firm polled companies on the issue.

The share of employers reporting they have inoculation requirements jumped eightfold from the percentage who said they had adopted such mandates in Littler’s August 2021 survey report. Less than 1% of companies reported having vaccine requirements in the firm’s survey report issued in February 2021.

The report released Wednesday shows employers increasingly have turned to vaccine mandates as the pandemic has dragged on for more than two years, killing nearly 1 million Americans and infecting more than 81 million.

“It’s clearly in employers’ interests to have a vaccinated workforce for all kinds of reasons, including demand from customers,” said Devjani Mishra, a Littler attorney and co-leader of the firm’s vaccination working group. “Some companies came out early and said they want to be on the side of public health. We’ve had clients who adopted requirements to create certainty.” 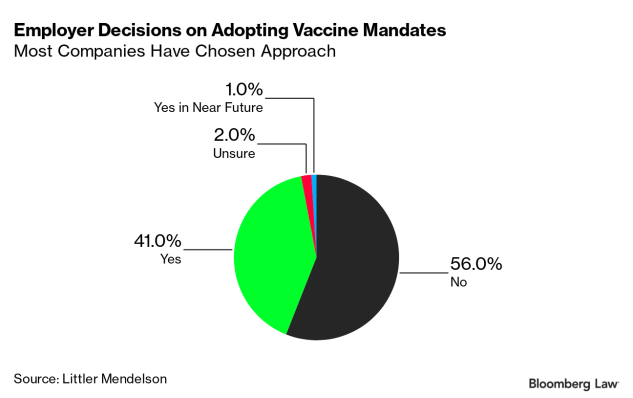 The firm’s report comes after a recent period of flux in how the country is managing the coronavirus, with indoor masking requirements falling and many companies bringing workers back to the office, Mishra noted.

More than half of employers have rolled out their formal return-to-office policies, which includes both full-time and hybrid on-site formats, the report said. Another 11% plan to call their workers back by the end of this month.

“We’ve all been watching this movie long enough and know what that means,” Mishra said. “With more people together indoors and fewer masks, there are going to be more cases.”

But even as the pandemic landscape shifts, the survey data—based on responses from close to 1,300 human resource professionals, in-house attorneys, and executives—suggest many employers have made up their minds about Covid-19 shot requirements.

While 41% of employers have mandates, 56% said they don’t and wouldn’t implement a vaccine policy unless legally required. Just 2% were unsure, with another 1% saying they plan to roll out a policy in the near future.

A comparison with past survey results signals that employer opposition to mandates has remained relatively steady since the early days of vaccine availability, even as many undecided companies eventually adopted some form of requirement. Nearly half of employers that Littler polled 16 months ago had decided against shot mandates, as opposed to 43% who said they were still considering them.

Employers largely took a more flexible approach to their mandates, with 45% allowing unvaccinated workers to undergo regular testing and follow other safety measures, according to the Littler report. That type of policy, sometimes known as a “soft mandate,” is less likely to spark employee blowback than a hard, vaccinate-or-terminate model, according to lawyers and law professors.

Just 27% of employers opted for a policy that calls for firing workers who refuse to get vaccinated, with exceptions for religious or health-related accommodations required by law. The remaining 28% block unvaccinated employees from working on-site.

Among those companies with mandates, 39% chose to adopt requirements on their own, compared to 29% that are required by law, and 24% that established requirements in response to the Occupational Safety and Health Administration’s now-defunct shot-or-test rule, the report said. Another 7% responded to requests or requirements from customers or other third parties.

Almost 70% of employers without vaccine mandates were planning to comply with OSHA’s vaccine-or-test rule or the federal contractor mandate, but didn’t move forward after those regulations were suspended by litigation.

Top employer concerns about vaccine mandates included how they would impact recruiting and retaining staff, as well as logistical challenges related to offering a testing option. But there’s a sharp divide between employers even on those issues, with far fewer companies with requirements in place voicing those worries. 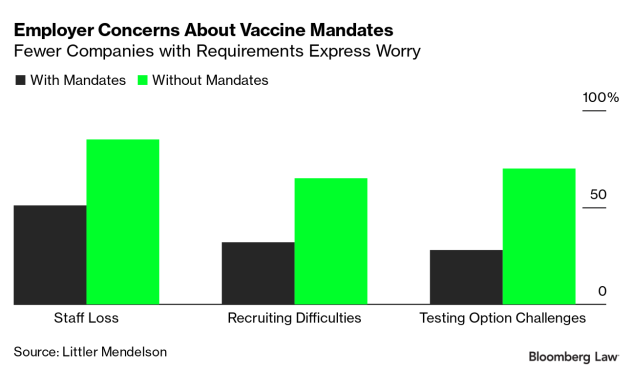 That divergence may reflect that the downsides of vaccine mandates appear more difficult to manage than they actually are, said Mishra, the Littler lawyer.

“Those employers that went ahead and implemented a mandate have not seen the challenges that their counterparts who haven’t are worried about,” she said.