Top U.S. health officials expect the rate of coronavirus deaths to rise with more hospitalizations, and states with intense outbreaks should close bars and slash restaurant capacity, one of ’s top coronavirus advisers said Tuesday, rebutting the president’s downplaying of the pandemic.

Admiral , who serves as the nation’s testing czar, acknowledged the gravity of the outbreak in an interview Tuesday morning with NBC, while offering notes of optimism and calling on Americans to keep wearing masks. The U.S. had 58,000 cases yesterday and a record 66,000 on Saturday. 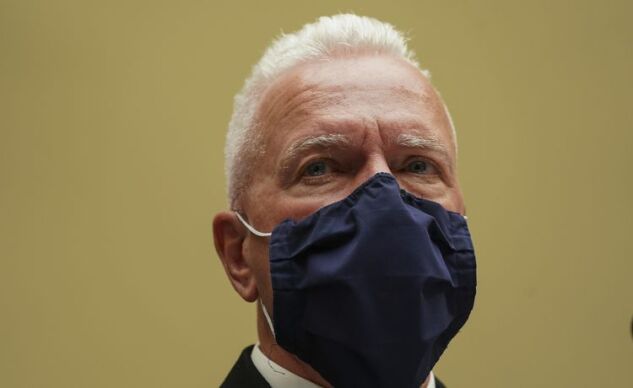 “None of us feel comfortable. Nobody’s doing a victory lap. We are all very concerned,” Giroir said, citing outbreaks in Texas, California, Florida and Arizona in particular. He said, however, there are early indicators that the rate of positive tests have leveled off or fallen in those jurisdictions.

“These are the early indicators that we’re turning the corner,” Giroir said. “This doesn’t mean we’ve turned the corner, and I want everybody to really understand -- you’ve got to physically distance, wear your mask, avoid bars, close bars in those hot areas, reduce restaurant capacity. If we keep doing those things, those early indicators will turn into successes for us.”

Giroir’s comments generally rebutted those from Trump, who hasn’t regularly urged Americans to socially distance and wore a mask publicly for the first time over the weekend. Trump has sowed doubt in health officials, touted unproven potential treatments and said the U.S. outbreak is largely a function of its testing system, which remains fraught with problems and delays.

Despite a rise in new cases, the U.S. is “in a much different place than we were several months ago, a much better place,” Giroir said. About 63,000 people are hospitalized, down from about 85,000, while a lower share of them are on ventilators, he said.

The mortality rate has fallen across all age groups, he said. “But we’re still very concerned, because as hospitalizations go up, we would expect deaths to also go up,” he said. The White House has deflected questions about rising case totals by pointing to a falling mortality rate.

Trump has pushed to reopen schools across the nation -- threatening to withhold funding from those that don’t, before one adviser said Monday he may instead offer new funding to those that do. Giroir said it’s important to curb the virus to be able to open schools.

California on Monday and bars once more, and its two biggest school districts said they would only offer remote learning despite calls from the Trump administration for classrooms to fully reopen.

“There is a way to get children back to school safely, we all need to be on board to try to do that,” Giroir said. But “we’ve got to get the virus under control more in the community, that makes everything much more easy as we approach the school year.”

Trump has said regularly the virus will fade away or disappear. Giroir said steps are needed to make that happen. “It’s not just going to disappear, it’s going to disappear because we take active steps to make it disappear,” he said. “It’s only going to disappear if we work together.” He again reiterated the need to wear masks, physically distance and avoid crowds. “We will beat this virus, I’m very confident of it.”

Giroir was also asked about Trump’s retweet a day earlier of a message saying doctors and U.S. health officials are lying about the virus. “We may occasionally make mistakes based on the information we have, but none of us lie. We are completely transparent with the American people,” he said of the health officials.

He was also asked about criticism from the White House of , the nation’s top infectious disease expert. “None of us are always right. We admit that. I think we have a good relationship. The vice president listens to us all, we meet regularly,” he said. “We’re just going to keep our heads down, working together.”

Trump on Monday said he had a “” with Fauci, despite evidence of a growing rift between the two men

To contact the reporter on this story:
in Washington at jwingrove4@bloomberg.net