An ambulance responds to an emergency call in Joplin, Mo., in August 2021.
Photographer: Angus Mordant/Bloomberg via Getty Images

Ambulance companies are warning they face a major worker shortage that could slow emergency response times across the country if nothing is done to help them.

The groups say the problem is widespread: nearly everywhere in the country, emergency response crews are struggling to fully staff ambulances.

“I don’t know of a service out there right now that isn’t feeling a worker pinch,” said Shawn Baird, president of the American Ambulance Association. 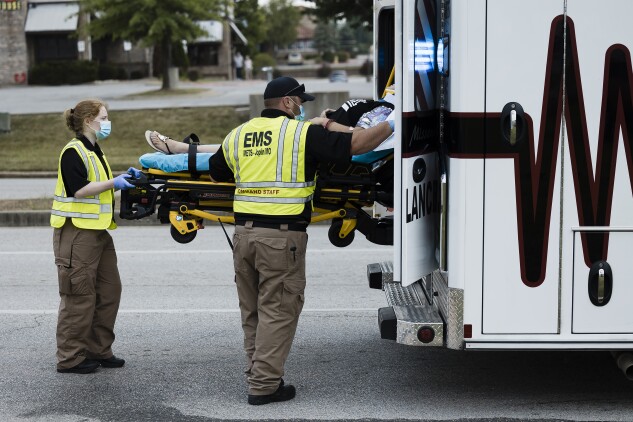 Emergency medical technicians carry a patient involved in a car accident into an ambulance in Joplin, Mo., in August 2021.
Photographer: Angus Mordant/Bloomberg via Getty Images

The ambulance industry has complained that Covid relief money distributed to health-care providers was never given directly to them. Federal officials sent out rounds of funding to rural providers and hospitals, but not specifically ambulance companies. That fund has now run dry.

Turnover among paramedics and emergency management technicians ranged from 20% to 30% annually in 2020, according to a survey the American Ambulance Association released late in 2021. That means ambulance services can expect to replace their entire staff roughly every four years.

Bureau of Labor Statistics data show health care in general enjoys a lower-than-average rate of employment separations. The health industry in 2021 had a 39% separation rate, compared to an overall average of 47%.

The ongoing Covid pandemic has increased demand for medical personnel, from physicians to nurses and EMTs, according to Department of Labor data. At the same time, nurses and other professions that require similar training as first responders command a higher salary.

The median annual wage for EMTs and paramedics was $36,650 in May 2020, about half the pay of a registered nurse, according to the Bureau of Labor Statistics. Nursing does typically require more education and training, however.

Most ambulance services are regional, and many are publicly run or financed, but they aren’t treated the same as fire and rescue or hospitals, Baird said. EMTs often aren’t eligible for tax credits for training programs like nursing and doctor programs are, or for funds set up for firefighters, he said.

“We’re just a little sliver that got lost in the middle,” Baird said.

Privately-owned ambulance companies say the worker crunch is hitting them too.

Ted Van Horne, chief operating officer of Global Medical Response, said it’s nearly impossible for ambulance companies like his to compete with hospitals on wages. Horne said his company, one of the largest emergency response companies in the country with 38,000 employees and backing by private equity, spent $230 million in added expenses for Covid-related employee assistance in 2020, as well as increased wages.

Despite the higher spending, there’s still higher-than-average turnover, he said. “We have this gap, a massive health care shortage right now,” Horne said.

That shortage of personnel can slow response times, he said.

Ambulance groups are hoping Congress will come to their aid.

The typical cost of a ground ambulance trip ranges from $224 to $2,204 per transport, according to a Government Accountability Office report. Medicare pays 80% of any approved ambulance costs once a beneficiary hits their yearly deductible.

Sens. (I-Vt.) and Wednesday introduced legislation to authorize a $500 million grant program to support emergency medical response needs. It would fund training and recruiting volunteers and buying new equipment, among other provisions. It would also call on federal health officials to report on financial challenges around EMS crews and make recommendations to Congress on how to address them. The legislation currently has no Republican cosponsors.

“EMS and fire department calls have skyrocketed during the pandemic,” Smith said in a statement. “Yet too often, these emergency services are understaffed and underfunded.”