A red ribbon in recognition of World AIDS Day hangs from the North Portico of the White House in Washington, D.C., on Dec. 1, 2017.
Photographer: Saul Loeb/AFP/Getty Images

The Trump administration is aiming to lower new HIV infections by more than 90%—to 3,000 a year by 2030—but officials expect an initial bump in new diagnoses over the next two years.

The numbers “are ambitious but doable,” Carl Schmid, co-chair of the Presidential Advisory Council on HIV/AIDS, said in an interview. Accomplishing them will require political will and leadership at the local level.

The projections, obtained by Bloomberg Law, are the first detailed goals in President Donald Trump’s plan to end the spread of HIV in the U.S. by 2030. The plan aims to reduce new HIV infections by 75% in the first five years and by 90% in the next 10 years. The Centers for Disease Control & Prevention says 38,739 people were infected with HIV in 2017. 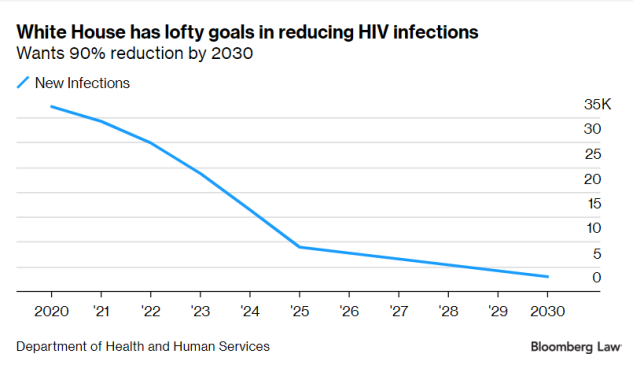 The administration plans to use six indicators to signal success of its plan to end the spread of HIV. The HHS will look at the number of new infections each year, the percentage of infections that are actually diagnosed, and how many of those people receive medical care within 30 days of a positive diagnosis. That’s defined as at least one test that shows how their immune systems are functioning or the amount of HIV in their blood.

The goals were first discussed at an advisory council meeting Oct. 21 by Health and Human Services Assistant Secretary for Health Brett Giroir.

The administration projects new diagnoses to go up in 2020 and 2021 because there will be greater recognition of the disease that will lead to more testing. Officials haven’t quantified how big the jump will be, but Schmid said it will be a good thing because more people will get into care.

The administration will be looking at the indicators among people age 13 and older, Norma Harris, a senior adviser at the CDC’s National Center for HIV/AIDS, said at on the second day of the same meeting Oct. 22.

Officials also want to see a higher percentage of people at risk for HIV being prescribed HIV-prevention drugs. Only two drugs, Truvada and Descovy, have been approved in the U.S. for HIV prevention, also known as pre-exposure prophylaxis or PrEP. Both drugs are made by Gilead Sciences Inc.

The administration intends to get 13% of such patients receiving PrEP therapy by 2021 and increase that to 50% by 2025. 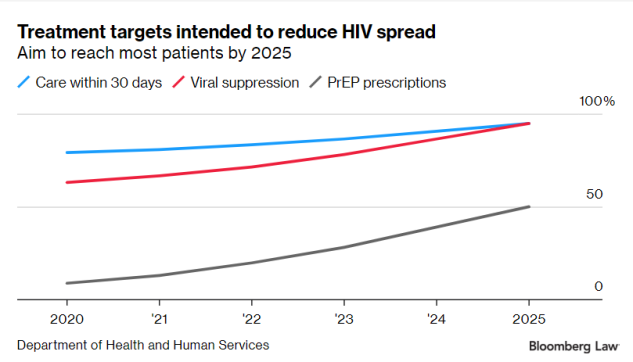 The Truvada donated by Gilead to the federal government will begin distribution in early December, Giroir said at the meeting. He said patients will be able to call, and if they qualify, will be able to get free PrEP delivered to them.

Patients are already able to get free Truvada through Gilead if they have an income up to 500% of the federal poverty level.

The administration will also look at the percentage of patients in whom the HIV virus is suppressed and who are alive at the end of the next calendar year. The virus is suppressed when patients’ “viral load” is reduced through medication so they are less likely to spread the disease and more likely to stay healthier longer.