President insists his administration is ready for a coronavirus outbreak in the U.S., yet reports of new cases in several states over the weekend will test his effort to project control over the spreading infection.

With global markets sliding on concerns the virus could touch off a worldwide recession, Trump now faces the most serious challenge of his crisis-management skills -- one that could imperil his bid for a second term. So far, he has painted any criticism of his handling of coronavirus as an attempt to undermine his presidency.

“Now the Democrats are politicizing the coronavirus,” Trump said Friday night at a rally in South Carolina, just hours before the first U.S. death from the virus. “This is their new hoax, but you know, we did something that’s been pretty amazing.” 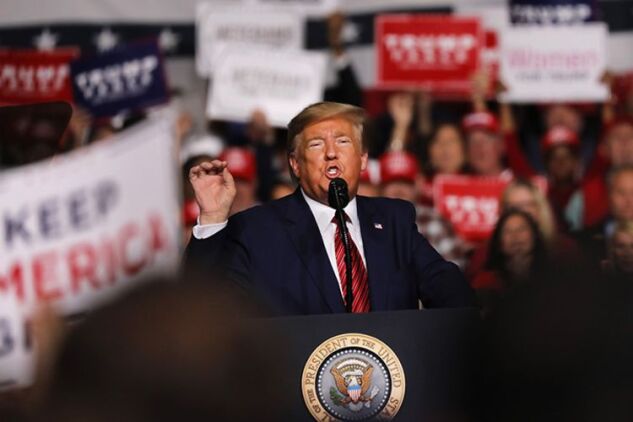 Yet medical experts and lawmakers from both parties are increasingly concerned that the U.S. government is far from ready for the virus to spread broadly among the American public. They’re sounding the alarm that a surge in U.S. cases would quickly overwhelm hospitals, amplify supply shortages, and disrupt the world’s largest economy. On Sunday, New York City reported an infected patient in Manhattan.

Trump will meet with pharmaceutical company leaders on Monday.

“Maybe a cure is possible,” he told reporters at a meeting with Colombian President Ivan Duque. “They’re moving along very quickly.”

But the U.S. isn’t presently prepared for an outbreak, said , professor and dean of the National School of Tropical Medicine at Baylor College of Medicine in Houston. “That’s the bad news,” he said.

“But the good news is, I still think we have a couple more weeks to figure it out,” he added.

The virus is steadily spreading. There were at least 40 cases in the U.S. as of Monday morning, and the disease is now in at least 65 countries. Washington state health officials reported a second death.

Coronavirus cases leaped by 50% in Italy over the weekend and nearly doubled in Iran. France added 30 new cases, while Australia also reported their first deaths.

The crisis promises another touch-and-go week for the president, who was last week unable to talk markets down from the worst sell-off since the 2008 financial crisis. Trump meeting with pharmaceutical executives at the White House will be closely watched for signals about the timing of a possible vaccine, antiviral medicines and the expansion of testing for the virus.

But the president’s powers are limited. His administration can coordinate supplies and address shortages -- Trump said Saturday the U.S. signed a contract with to produce masks. The government will also set testing standards, and on Friday announced it would open the door for more testing by private labs. But local public health authorities and hospitals are on the front lines.

“My overwhelming experience as the Ebola czar was that I was the czar of nothing, because we don’t have a command-and-control health care system in the United States,” , who served in President ’s administration, said in February at the Aspen Institute in Washington.

Health officials have cautioned that the risk for most Americans remains low. Healthy adults can expect symptoms akin to the flu while the elderly are at greater risk, said , director of U.S. National Institute of Allergy and Infectious Diseases at the National Institutes of Health.

But even a single case can have significant ripple effects at a hospital. An infected patient at the University of California-Davis Medical Center led to more than 120 health care workers being sent home as a precaution, according to a nurses union. The hospital declined to comment, after saying in a statement that a “small number” of workers were asked to stay home and monitor their temperatures.

“Nurses view the handling of this COVID-19 case as a system failure and not a success,” National Nurses United said in a statement last week. The group said nurses had repeatedly asked the hospital to do more to prevent an outbreak before the infected patient arrived.

Hospitals are preparing, though they already face supply shortages. The is planning for the possibility that it might have to operate with 40% of staff out due to illness or care-giving if measures such as school closures are implemented, said Shelly Schwedhelm, executive director of emergency management and biopreparedness at Nebraska Medicine. The hospital treated Ebola patients in 2014 at the request of the federal government.

“In a pandemic event, all personnel are essential,” she said. “I can basically teach our senior C-suite how to clean rooms if I need to.”

Trump’s management of the crisis will be challenged by his penchant for speaking off the cuff. He said Wednesday that U.S. cases were declining -- “we’re going down, not up” -- before the number of patients doubled over the weekend and Washington state reported the first U.S. deaths from the disease. He incorrectly identified the first deceased patient as a woman on Saturday; the head of the Centers for Disease Control and Prevention later said he’d made a mistake in briefing the president.

The president’s tone began to change over the weekend. “Additional cases in the U.S. are likely, but healthy individuals should be able to fully recover,” Trump said Saturday.

He has also been peppered with questions about using the word “hoax” at a campaign rally on Friday to describe criticisms of his administration’s response to the disease. He clarified Saturday that the virus isn’t a hoax, and didn’t repeat the language in another political speech the same day.

Trump has called a pair of coronavirus news conferences in the past week, including on Saturday where he confirmed the first U.S. death. He’s and mused about . His administration has added new officials, including the Treasury and Housing secretaries, to its coronavirus task force, which Vice President is now leading.

Trump plans to attend a global health conference and exhibition called HIMSS20 next Monday in Orlando, Florida, according to two people familiar with the matter. The conference brings together about 45,000 health information technology professionals, clinicians and others, according to its website.

Some local health officials say they lack guidance from the federal government.

“We have not seen much information from the feds going to our hospital system about the need to be ready for a surge or prepare for supply-chain issues,” said Dr. Umair Shah, executive director of the Harris County Public Health department in Houston. The county is home to about 4.7 million people spread across an area the size of Rhode Island.

Shah was in Washington last week to press his case for better communication.

, the California-based insurer and hospital operator, has opened a national command center to prepare for a possible surge in patients. Clinicians are screening patients with respiratory illness for travel history and contacts with others potentially exposed.

But the biggest practical problem for hospitals is that they rely on state or federal labs to test for the coronavirus, said one senior official at a large health system. The UC-Davis Medical Center case indicates some patients without known risk factors may have been exposed to the coronavirus, and constrained testing capacity means similar cases might not be detected, the official said.

The official asked not to be identified in order to speak frankly about preparations.

Michael Fraser, chief executive officer of the , said U.S. contingency plans for a sudden spread of a disease like coronavirus haven’t been tested.

“The real issue is response. And that’s really what the last week has been about,” he said. “If this really expands quickly we’re going to need a lot more surge capacity.”

Trump’s acting chief of staff, , said last week schools could end up being closed in an outbreak. But Fraser wonders if health officials will be able to smoothly roll out similar large-scale quarantine measures.

“I think we really need to ask ourselves: is that going to work here? Do we have the capacity to do it?” Fraser said. It depends on how widespread an outbreak is, he added.

The U.S. public health workforce has been diminished in the last decade. The number of full-time positions in state public health departments declined by about 15% between 2010 and 2019, to less than 92,000, according data from Fraser’s association.

“We feel comfortable we could accommodate a surge in patients,” he said before adding the caveat: “We don’t know what we don’t know at this point.”

(Updates with Trump plans to attend conference in 23rd paragraph.)