President Donald Trump is coming under increased pressure to impose national rules as the U.S., already with the world’s highest coronavirus death toll, struggles to contain the spread of the coronavirus.

The White House has largely avoided strict rules or a master plan, leaving many of the decisions to industry or state leaders. That approach is exacerbating shortages of protective equipment at hospitals and could complicate distribution of future vaccines, experts say.

“It would be much better if we acted as a country,” Ashish Jha, director of the Harvard Global Health Institute, said Wednesday. He recommends the White House mandate outlining when Americans should wear masks nationwide to slow the transmission of the Covid-19 virus. The administration has said it will leave mask requirements up to states.

The U.S. surpassed 150,000 deaths due to the coronavirus, by far the most, according to data from Bloomberg and Johns Hopkins University. Brazil has the second-highest at about 88,000 deaths.

The debate over whether and how to impose national mandates will be on display when Anthony Fauci, the U.S government’s top infectious disease expert, and Robert Redfield, director of the Centers for Disease Control and Prevention, testify Friday before the House Select Subcommittee on the Coronavirus Crisis. 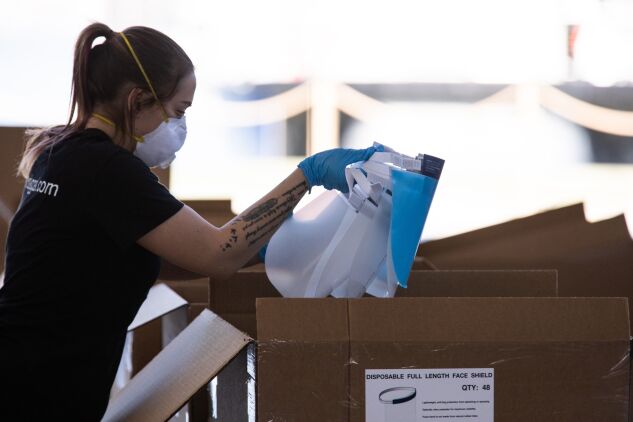 Democratic leaders say they want to require the White House to lay out a plan for distributing an eventual Covid-19 vaccine. The next stimulus must have a “comprehensive, end-to-end national vaccines plan that addresses supply chain issues, health disparities, vaccine confidence, and more,” said Sen. (D-Wash.), ranking member of the Senate Health, Education, Labor and Pensions Committee.

House Energy and Commerce Chairman (D-N.J.) made the case to the House Democratic Caucus this week that the next stimulus package should have a national testing and tracing plan and call for a “medical supply response czar” to handle supply chain issues, according to two Democratic aides on a caucus-wide call discussing plans for responding to the coronavirus outbreak.

The Trump administration in May released a strategic plan for expanding testing that largely put the onus on state governments to make the tests widely available.

Hospitals, states, and the federal government, which is currently buying medical supplies trying to restock the Strategic National Stockpile of medical supplies, are still competing with each for these supplies, Powell said.

“There’s a real need for broader planning here,” he said.

A central, national plan could coordinate spending to expand manufacturing capacity of syringes and other supplies necessary to distribute a Covid-19 vaccine, the left-leaning Center for American Progress reported Wednesday.

Because demand outstrips supply in the U.S. for these products, Premier and its members have been forced to turn to “gray market” suppliers offering products such as masks, and these have murky distribution channels that often turn out to be scams, Powell said.

Premier and similar organizations have asked the government to help vet gray market suppliers or take charge and act as a central clearinghouse for them, he said.

Republicans are embracing the White House’s decision to avoid being a central source of medical supplies: the Senate’s plan for the next coronavirus packagewould establish state stockpiles of medical products and items needed during a public health emergency, and asks the federal government to provide technical assistance.

Public health officials have said the White House also needs to require states to report the same, comprehensive data on Covid-19 cases. States have been largely left to decide how to report this information, researchers say.

“It’s like a team trying to get something done but everyone has their own strategy,” Cyrus Shahpar, former leader of the Global Rapid Response Team at the CDC, said. “You need a coach to get everyone working together.”

Shahpar is now director of the Prevent Epidemics Team at Resolve to Save Lives, a group that’s part of the global health organization Vital Strategies calling on the White House to standardize the data being reported on Covid-19 cases.

States aren’t reporting how fast they can turn out diagnostic tests and only two states are providing data on how fast contact tracers are reaching people with the virus. Few states have standards for when schools can reopen based on the spread of the virus and other matters, he said.

Jha, in an interview for the Economic Club of Washington, D.C., blamed the White House for failing to require states to report key metrics about the spread of the virus in their borders or establish rules for when businesses must shut down based on the virus’s spread.

Shahpar said his group is trying to fill that gap by working with two states, which he would not name, on improving their data reporting.

“Right now there’s no good example of one places that’s doing everything right,” he said. “We’re hoping to get some good examples that others can follow.”