Trump during a roundtable at the White House today, where he said the increase in cases is primarily due to expanded testing.
Photo by SAUL LOEB/AFP via Getty Images

Lawmakers in the House are turning up the heat on President Donald Trump’s administration to publish more information on Covid-19 patients by race, saying insufficient data is hurting efforts to remedy equities in the U.S.

House Energy and Commerce Committee Chairman (D-N.J.) called on the Centers for Medicare & Medicaid Services to release specific Medicare outcomes data based on race, ethnicity, and gender, as agency heads have previously promised to do. The agency also needs to make public a comprehensive strategy for reducing racial disparities in Covid-19 cases, he said.

“This is a wholly inadequate response,” Pallone said at a hearing his panel held Wednesday on racial disparities.

Pallone sent a letter to CMS Administrator Tuesday asking for the outcomes data. Verma had said at an April news conference her agency would release Medicare demographics data “very shortly.”

Rep. (D-Calif.) said the “federal data collection is very important” and called on her colleagues to support legislation to direct the government to require new reporting of Covid-19 data.

Black Americans in particular make up an outsized portion of both Covid-19 cases and deaths: African Americans make up about 13% of the population but constitute about 33% of the nation’s total Covid cases, current federal data show. African Americans die at a rate of 54.6 deaths per 100,000, more than double the death rate among Whites. 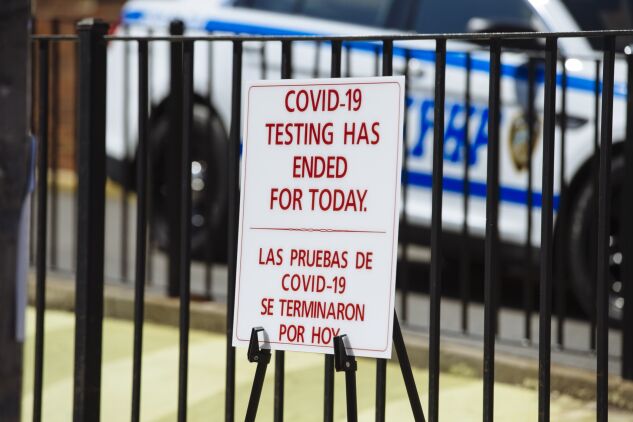 A sign saying “COVID-19 testing has ended for today” stands outside a testing site at Elmhurst Hospital Center in the Queens borough of New York on March 26, 2020.
Photographer: Angus Mordant/Bloomberg

Democrats have previously pushed to send federal dollars to community and faith-based organizations for outreach and public education as well as for collecting data on how the coronavirus affects minority communities.

Rep. (R-Texas), the ranking member of the Energy and Commerce Health Subcommittee, said he agreed lawmakers need to address racial inequities in health outcomes for Americans and urged his colleagues to work on “legislation that can actually become law.”

Researchers and advocates for Black communities have said the federal government hasn’t been collecting and publishing enough basic race and ethnicity data on Covid-19 cases: to date more than 40% of the Centers for Disease Control and Prevention’s database of coronavirus cases lack such information, a Bloomberg Government analysis of CDC data shows.

That’s an improvement, in April 64% of that demographic data was missing information about the race and ethnicity of those cases, researchers say.

One major difficulty is getting data at the local level, from individual laboratories and hospitals performing Covid-19 tests, Rhea Boyd, a pediatrician and child and community health advocate who works at the Palo Alto Medical Foundation, told lawmakers Wednesday.

Many state health departments are collecting the data now, but communities with large populations of Black and Hispanic residents have been historically left out of public health programs, she said. Early Covid-19 testing efforts weren’t set up in areas where minorities live, she said.

Some states have done better jobs than others on reporting. Indiana has ethnicity data on fewer than half of its reported Covid-19 cases, according to state data. Louisiana has no race data on cases but does regularly report race data on Covid deaths.

Earlier in June, the CMS mandated that laboratories report more details to the government about people who take coronavirus tests, including information on race, gender and zip code. Agency representatives at the time said this will improve the availability of such data.