Rural communities have been losing access to maternal case. A federal grant program is aimed at addressing that.
Photo by Scott Olson/Getty Images

Kearny County Hospital is in Lakin, Kan., a town with a population of 2,200, but it delivers nearly a baby per day and its maternal health outcomes are better than those in urban communities.

The hospital is now delivering healthier babies and has lower cesarean section rates by flying out a fetal medicine specialist once a month who works to help address the community’s high rate of gestational diabetes, having family physicians provide a variety of services, and providing unique benefits to the doctors they’re recruiting, Benjamin Anderson, the CEO, said.

Rural communities have been increasingly losing access to maternal care services, and the Health Resources and Services Administration is launching a grant program to give networks of rural hospitals doing obstetrics care up to $3 million each for four years to improve access to that care.

Over 150 communities have lost access to hospital-based obstetrics services since 2011, and only 46 percent of rural hospitals provide labor and delivery services, according to the Chartis Center for Rural Health. Loss of these services in rural areas leads to increases in out-of-hospital and preterm births and births in hospitals without obstetric units, according to a 2018 study.

Communities that were more vulnerable, like rural counties with less generous Medicaid programs and counties with a higher proportion of black residents to white residents, were more likely to lack obstetrics services, according to a 2017 study.

The grant is meant to work as a pilot to test out ideas from HRSA and from people working in rural communities to improve maternal care access, Tom Morris, HRSA associate administrator for rural health policy, said in an interview. 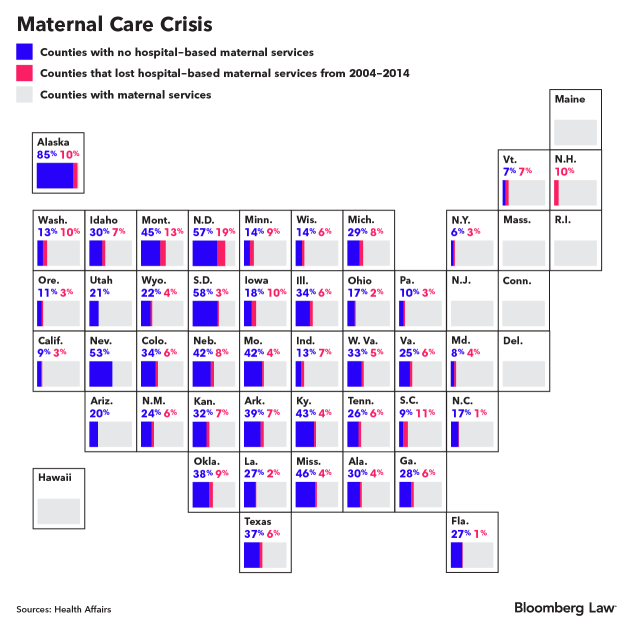 Some hospitals drop their obstetrics care because a lack of volume means costs are too high, but a networked group of hospitals could still continue to deliver maternal services, Morris said. Given the limited scale and economies in rural areas, networking has been used “almost as a survival strategy,” he added.

HRSA is requiring that organizations applying for the grant program be part of a network that includes at least two rural or critical access hospitals and one federally qualified health center. The network is also required to contract with Medicaid and be part of one of two programs aimed at helping mothers and improving infant mortality. Grant applications are due May 24.

This grant is going to test the hypothesis that networking rural maternal care could reduce costs, Morris said. The thinking is that by better managing high-risk or complicated pregnancies and sending those women to facilities better equipped to handle the complexity, hospital costs could drop, he added. Morris also wants grantees to try to measure and address high rates of maternal mortality in rural areas.

There is a lack of systemic research on ways to solve the maternal care access issue in rural areas, Katy Kozhimannil, director of the University of Minnesota Rural Health Research Center, said in an interview, and this grant will pay to gather evidence. Individual communities have come up with solutions, but there isn’t a clear pattern for what’s successful, she added.

HRSA’s Morris said he wants medical schools or teaching hospitals to be part of this grant program to help the providers working on the ground.

The Rural Residency Program is working to train OB-GYN residents in rural communities because residents tend to stay in the areas where they train, Silva said.

Kearny County Hospital has intentionally recruited service-minded physicians, Anderson said. These doctors are all millennials who want to serve communities, and so the hospital gives them 10 weeks of paid time off each year to provide care in developing parts of the world, Anderson said. That also gives them more cultural competency in caring for their diverse patient population in Kansas, he said.

This benefit—and a reasonable salary—has meant the hospital hasn’t had trouble finding physicians and has doctors reaching out who want to work there, Anderson said. Because these doctors are mission-driven, they work harder and exceed the hospital’s investment in them, he said.

Some solutions that are already working in rural communities include Alaska’s Medicaid program paying for pregnant women to stay in homes closer to hospitals when they reach 34 weeks and support groups that help provide childbirth education, Kozhimannil said.

Parents in Grand Marais, Minn., are provided videos to help prepare them for a rural birth. The videos offer advice like making sure they always have a full tank of gas after they pack a hospital bag, Kozhimannil said.

Telemedicine can be helpful for specialized support in emergencies, but it’s not a good solution for prenatal care, Kozhimannil said. There isn’t good evidence that it is bringing in better results for rural maternal care, she said.

The HRSA grant requires telehealth to be part of the models that are tested, and that could include fetal monitoring, Morris said. Telehealth would be the most cost-effective way to improve access to maternal care and help support local doctors, Silva said.

The most cost-effective way to improve rural maternal care would be to invest in systems that are based in the communities that need it and integrate the community in the care, Kozhimannil said.

In full spectrum family medicine, family physicians will do everything from delivering a baby to making rounds in a hospital to performing surgery, Anderson said.

This type of medicine isn’t common in urban areas, but in rural areas having one doctor care for a multi-generational family can improve care coordination, Anderson said. It’s “easiest to find footing for this concept in a place where there’s nothing else” to support family care, he added.

Hospitals also need to measure outcomes that matter to patients, Anderson said. Typically, they ask patients how the hospital did, but they need to be asking mothers what they hope for during and after their pregnancies, he said.

Maternal care programs likely won’t make money, he added, but the financial net impact can be positive if a satisfied mother engages her family members in taking better care of their health.