Boxes of N95 respirator masks move down a conveyor belt at a United Parcel Service Inc. facility in Louisville, Ky., on April 13, 2020. Masks are among the items being added to the nation's stockpile.
Photographer: Luke Sharrett/Bloomberg

President announced plans to resupply and maintain the U.S. stockpile of medical equipment, more than two months into a coronovirus pandemic that initially caught many hospitals with shortages of ventilators and protective gear.

The U.S. will keep 90 days of supplies to gird against future flare-ups of the outbreak as the nation begins to reopen its economy, according to the Trump administration.

“I’m determined that America will be fully prepared for any of the future outbreaks,” Trump said Thursday after touring an distribution center for medical supplies in Allentown, Pennsylvania.

As part of the effort, Trump signed an executive order seeking to encourage domestic medical supply production by providing loans through the International Development Finance Corp.

The order gives the chief executive officer of the agency, , authority under the Defense Production Act “for the domestic production of strategic resources needed to respond to the Covid-19 outbreak, or to strengthen any relevant domestic supply chains.”

The president and his administration were widely criticized by state and local officials and medical workers for shortages of basic protective gear at hospitals as coronavirus cases surged in March and April. Trump on Thursday blamed the President for leaving the national stockpile depleted but didn’t address why his administration, three years into office, hadn’t replenished it.

The company that hosted Trump Thursday, Owens & Minor, has participated in “Project Airbridge,” the program Trump’s son-in-law and senior adviser created to transport needed medical gear from overseas into the U.S. The program transports supplies bought by distributors like Owens & Minor at taxpayer expense.

The company hasn’t said where its Project Airbridge supplies were sold or what it charged customers who benefited from the program.

Trump toured the distribution center without wearing a face mask. His chief of staff, Mark Meadows, was seen aboard Air Force One wearing a mask emblazoned with the presidential seal.

Almost everyone around Trump during his visit wore a mask, including Health and Human Services Secretary and Kushner.

The Strategic National Stockpile will now maintain an inventory of supplies while additional surge manufacturing is built up, a senior administration official said Thursday. The stockpile will include virus testing supplies that weren’t maintained in the past.

In addition to bolstering the federal storehouse of crucial supplies like ventilators and respirator masks, the president’s plan -- being billed as the Strategic National Stockpile 2.0 -- calls for entering into contracts with companies to maintain a flow into the stockpiles, similar to the way the Defense Department manages its supply chains, according to senior administration officials who requested anonymity to detail the plan before it was formally announced. 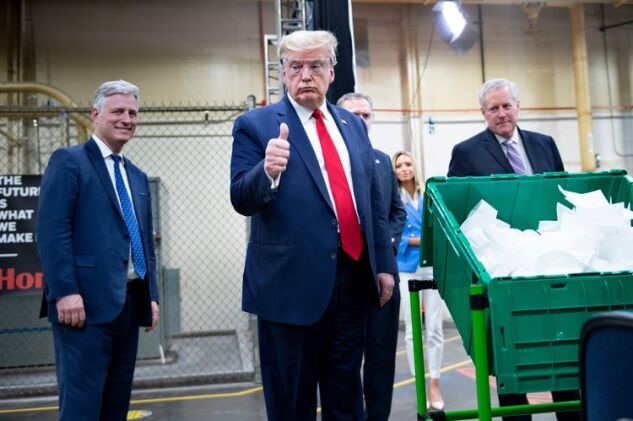 Under the new system, the government will collect information on the manufacturing of supplies, what hospitals have available on their shelves and how quickly hospitals are using supplies, the official said.

The stockpile had 13 million medical-quality N-95 masks when the coronavirus pandemic rocked the U.S. The government aspires to have 1 billion, with 300 million anticipated by fall. It had 2 million gowns at the start of the pandemic and expects that to grow to as many as 7 million. While there weren’t any drugs for ventilator patients in the stockpile, the government expects to have millions of milliliters in stock, the official said.

Before departing the White House, the president and Press Secretary criticized the Obama administration for its efforts to plan for a pandemic. She said the Trump administration rewrote its pandemic playbook in 2018 because the plan left by the prior administration was “insufficient” and “not going to work.”

“This is much better,” Trump said of his administration’s replacement effort. “This was much more complete and which was a lot tougher. We were given very little when we came in to this administration, and they’ve done a fantastic job.”

Trump has political incentive for the Pennsylvania visit. The president is hoping to bolster his standing in the state, a must-win for former Vice President and native son in November. In 2016, Trump became the first Republican to carry the state since .

In recent days, Trump has criticized Pennsylvania Governor , saying the Democrat is moving too slowly to lift coronavirus-related restrictions.

The nation’s top infectious disease expert, , has warned that reopening the country too quickly could lead to flare-ups of new cases and additional spread of the coronavirus. Wolf has warned businesses in his state that they could face penalties if they move to aggressively to reopen.