A person holds a transgender pride flag at a rally outside the Stonewall Inn in New York on June 28, 2019.
Photographer: Angela Weiss/AFP/Getty Images

Recent lawsuits are directing states to include gender affirming surgeries in their Medicaid coverage and end a half-century of debate on directing taxpayer dollars toward transgender care.

A mishmash of state policies and a myriad of legal barriers still make getting coverage a challenge.

Seven states have policies in place barring Medicaid coverage for surgeries, despite a federal law that mandates the coverage. Many of these states, most recently Wisconsin, are seeing these decades-old laws overturned in court. Even in the 19 states with laws requiring Medicaid to cover transgender care—which encompasses over 20 different forms of facial, body, and genital surgeries—low reimbursement rates and the limited amount of surgeons make getting covered a challenge.

Transgender people are more likely to depend on government assistance programs like Medicaid, according to the National Transgender Discrimination Survey, and the American Medical Association has classified surgeries medically necessary to treat a condition known as gender dysphoria—a condition in which someone’s gender differs from that assigned at birth so much so that it can interfere with their daily lives.

“The majority of younger people who have been marginalized in our systems are going to be needing Medicaid support,” Jamison Green, a former president of the World Professional Association for Transgender Health, said.

Requiring Medicaid insurers to provide coverage has been problematic since the program was established in 1965. There is now consensus in the medical community that these procedures are safe and necessary, which is night and day from the thinking 50 years ago. The unique state-federal partnership of the Medicaid program sometimes put state and federal laws at odds with each other.

Most state bans on transgender surgery coverage date back to well before the Affordable Care Act, which in 2016 added gender-affirming surgeries to a list of medically necessary procedures Medicaid must cover. That action gave teeth to a similar standard in the original law.

Some bans are no longer enforced. A spokesperson from Ohio’s state Medicaid agency confirmed the law is still on the books but defunct in practice. In May, Michigan started guaranteeing coverage when it added language to its provider guidelines corresponding with the federal law.

Other states still refuse coverage. Tennessee’s 2006 law includes “sex change” and “transsexual” surgeries on a list of treatments like dolphin therapy, trampolines, and breast implants that are exempt from Medicaid coverage.

Iowa is a textbook example of the uncertainty insurers and surgery seekers face concerning coverage. The Medicaid coverage requirement in the state has flip-flopped position multiple times in the past year. First, it banned coverage. In March, a federal court struck down its ban. Then in May, Gov. Kim Reynolds signed a bill into law allowing Medicaid providers to opt out of coverage for the surgeries.

“This is an elective surgery that if Iowans want to do, that’s fine but not with our taxpayer dollars,” state Sen. Jake Chapman told the Associated Press as the bill was introduced.

Gender-affirming procedures can range from $20,000 for genital reconstruction to $140,000 for all of the procedures, according to the Philadelphia Center for Transgender Surgery.

The Iowa law groups gender-affirming surgeries with cosmetic procedures and other plastic surgeries. The ACLU sued, arguing the law conflicts with gender-identity protections in the Iowa Civil Rights Act, but its lawsuit was dismissed when a state judge ruled the plaintiffs failed to exhaust all administrative remedies before suing.

A Sept. 3 appeal renewed the case, and the court agreed to fast-track its review.

“This case presents ‘an actual, present controversy’ that should be adjudicated now, as opposed to after the so-called ‘administrative process’ invoked by the district court,” the ACLU argued in its request for an appeal. Briefs are expected to be completed in mid-October.

Some states have no explicit rule that says Medicaid will cover these types of surgeries, and claims denials are common, even in states with specific requirements under a state law.

Even with no basis for a denial, the roadblock of an appeal often prevents people from pursuing the surgery, Green said. “Most people give up.” 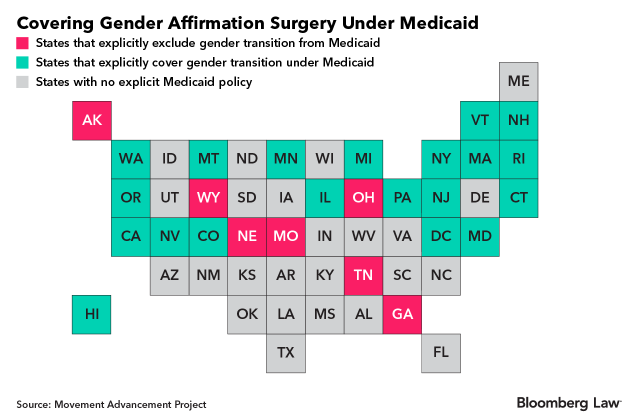 Insurers will often deny claims as a result of confusion surrounding the medical necessity of different procedures, according to Kieran Chase, a program manager at Basic Rights Oregon, a transgender justice center.

Some markets are still catching up to the ACA’s gender reassignment services requirement, a spokesperson for America’s Health Insurance Plans told Bloomberg Law. Providers often require “evidence-based care” such as hormone or mental health therapy for patients before surgeries, which can lead to denials.

In a state like Oregon, which has some of the most comprehensive Medicaid coverage for transgender health care, denials still happen.

Many denials come from a “from a place of having to go back and do education work,” and teaching providers that these surgeries aren’t something people would like to get done, they’re medically necessarily, Chase said. Therefore they’re required by law.

If a patient is denied coverage for a procedure because it is deemed not to be medically necessary, the patient can always appeal. As part of the appeal process, the denial undergoes an independent review from multiple physicians.

The skill level and time required make gender-affirming surgeries a costly procedure, and they can take as long as 16 hours.

Some Medicaid insurers set reimbursement rates for gender affirmation surgeries so low that it’s not financially viable for a hospital or surgeon to offer them, according to Devin O’Brien Coon, a surgeon and medical director at Johns Hopkins Center for Transgender Health.

“It’s not just less, but so much less—multiple times less than a regular insurance company,” O’Brien Coon said. “If they can pay so little that no one can afford to do the surgery, they won’t have to pay for it.”

Only three or four doctors in the entire country are capable of performing the complete array of surgeries, according to O’Brien Coon, who includes himself in that handful.

Medicaid is largely federally funded, but it’s administered on a state level, which is why most programs won’t pay for medical procedures in another state.

“Very few surgeons are providing these procedures,” Alex Keuroghlian, director of the National LGBT Health Education Center at the Boston-based Fenway Institute, said. “Very few have competence and confidence to do it. It requires a whole team of specialists.”

In Nevada, gender-affirming surgeries are covered, but it’s difficult to find providers, “especially to serve Medicaid,” said DuAne Young, deputy administrator of the Nevada Division of Health Care Financing and Policy. “While we offer the service, we don’t have a lot of specialists that can perform the gender reassignment surgeries.”

According to Young, Nevada works with leading medical schools in neighboring states to ensure its Medicaid population has access to out-of-state surgeries.The state also covers out-of-state transportation and overnight housing for patients.

“If we don’t have a readily accessible provider within the state, we will negotiate a rate” at which an out-of-state provider will be paid, Young said.