A nursing home nurse guides an elderly patient through a doorway in 2013.
Photographer: Bartek Sadowski/Bloomberg

Temporary nursing aides, who must meet reinstated federal training requirements to continue working in nursing homes beyond Oct. 7, remain in the industry’s most in-demand and hard-to-fill position even though the shortage of workers may be easing.

Twenty-five percent of US nursing homes reported a shortage of nursing aides as of May 8, down from a pandemic high of 29.8% in January during the omicron variant surge, according to an analysis of federal data by the National Investment Center for Seniors Housing & Care.

The share of facilities reporting a shortage of nurses—the other main providers of nursing home care—has also declined from 28.1% in January to 23.6% in early May. So, too, has the percentage of nursing homes reporting a shortfall of both nurses and aides, from 26% to 21.9% over the same period, said NIC senior principal Bill Kauffman and senior data analyst Omar Zahraoui.

The declines in direct-care staff shortages—and the addition of 900 nursing home industry jobs between March and April—suggests facilities are slowly recovering from the pandemic labor crisis that once sparked fears of an industry collapse. 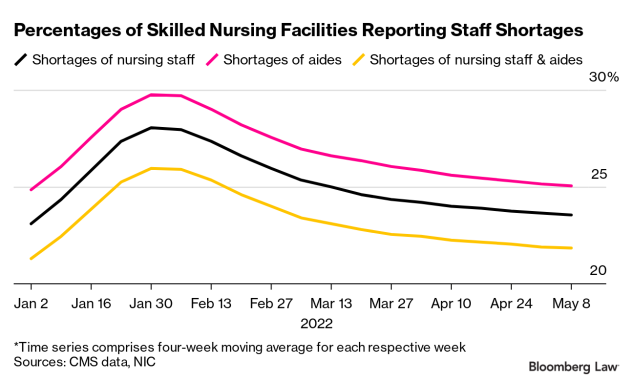 But Kauffman and Zahraoui said the slowdown in reported staff shortages likely reflects the hasty retreat of the omicron variant and the return of ill workers who had been sidelined. And despite the addition of 900 workers, the industry is still 44,000 jobs, or 3.2%, below its April 2021 employment level, they said.

Industry officials are likewise cautious about a possible recovery, knowing the improved labor situation could be upended by a new Covid-19 infection surge. After steady declines since January, new weekly Covid infections among nursing home residents have increased from 1,207 for the week ending April 3 to 3,153 weekly cases as of April 24, the CMS reported.

“This pandemic is far from over and, truly, the long-term care workforce crisis has never been more dire, said Holly Harmon, senior vice president of quality, regulatory and clinical services at the American Health Care Association and the National Center for Assisted Living, the industry’s leading trade group.

To maintain staffing levels at nursing homes early in the pandemic, the Trump administration waived a rule that limited employment for uncertified nursing aides to just four months. But to ensure better care for residents, the Biden administration reinstated the training requirement, effective June 7.

Temporary nursing aides who’ve worked at nursing homes during the pandemic have until Oct. 7 to complete the mandatory 75-hour training and pass a state certification test. Those hired after June 7 will have four months from their date of hire to complete the training.

Under the waiver, some states have required little additional training beyond an eight-hour online course, according to a recent report by the Center for Medicare Advocacy.

An expert in medical staffing, Scheller-Wolf said he was unclear on whether the renewed training requirement is sound policy during a severe labor shortage.

“Certainly, the people who hang around, if training works, are going to be more effective workers,” Scheller-Wolf said. “They’re going to be able to spot people losing weight, or people becoming more lethargic, or their color not being as good.”

But others may decide “‘Well, I don’t really feel like getting training. I will go do something else,’” he added. “And then, where that balances off as far as better or worse, I don’t know. That’s why I’m hesitant to say ‘yes, I think it’s a good idea,’ or ‘yes, I think it’s a bad idea.’”

Getting People to Apply

“Organizations might have 30, 40, or 50 open positions in their nursing department, and there’s just not people applying,” Ciborowski said. “Whether that’s because they have moved to industries outside of health care, or aging services, or they’re working in a hospital setting, or they’re working for an agency, there’s just challenges with even having folks apply.”

Harmon said over 300,000 temporary nursing aides nationwide have undergone abbreviated training provided by the association and the majority of them are trying to become certified nursing aides. But many are being “stalled” because their states currently don’t have the capacity to provide training and/or testing within the four-month limit, she said.

“The greatest concern with that, of course, is we do not want to lose these heroes who stepped up and continue to step up to serve our nation’s seniors in this time of crisis,” Harmon said.

Ciborowski said a lack of training slots and certification testing dates is a problem in Maryland. Some of her members expect to lose temporary aides “if there’s not a class available that’s convenient for them, or kind of a pathway to help them become certified, she said.

Maryland requires 80 hours of training to become certified, Ciborowski said. Her group is working with the state nursing board to allow on-the-job experience to apply toward the requirement, which federal guidelines do not allow.

‘Time is of the Essence’

“But time is of the essence because this waiver is ending and by October, all of these individuals need to be certified. So we’re eager to hear what the board of nursing will do to make that happen,” she said.

The AHCA is working with the Centers for Medicare & Medicaid Services to clarify the agency’s requirements for waiving the training mandate for operators that try, but are unable, to get their staff trained and certified within four months.

“We want to make sure that process is accessible and will be supportive of retaining these temporary nurse aides,” Harmon said.

The AHCA is backing a bipartisan House bill that would allow temporary aides in nursing homes 24 months to meet the federal training requirement.