The Trump administration’s effort to manufacture more medical products in the U.S. will take several federal agencies, years of jumping through regulatory hoops, and hundreds of millions of dollars, lawyers, lobbyists, and policy analysts say.

Health-care providers have struggled to get the drugs or equipment they need during the pandemic because so many of those drugs are made overseas. Researchers and lawmakers have decried that foreign reliance for years, but the public outcry over equipment shortages during the Covid-19 pandemic may finally lead to lasting change, industry analysts say.

President Donald Trump has prepared an executive order to bolster domestic manufacturing of the essential drugs and devices that were in short supply during the pandemic. The administration awarded a $354 million contract to a generic drugmaker to get it to begin that process.

But to undo over 30 years of offshoring would take years and substantial political clout. Trade deals might need to be renegotiated, and manufacturers need to be convinced they can keep plants financially afloat on U.S. soil.

Companies also need to be wary of environmental regulations their factories have to comply with and be prepared for a lengthy construction process.

It would be a “massive undertaking” for the U.S. and a “tremendous shift” in where and how drugs are produced, Nicolette Louissaint, executive director and president of Healthcare Ready, said. Healthcare Ready is a nonprofit that focuses on health-care supply chain preparedness.

It’s unclear exactly how much pharmaceutical manufacturing is done overseas because drug companies don’t have to disclose exactly where drugs are made.

However, researchers do have data from the Food and Drug Administration about manufacturing locations for drugs sold in the U.S. Drugs are regulated at three steps during manufacturing: during the raw or starting material stage; when those raw materials are combined into the active form—known as active pharmaceutical ingredients (API); and when they’re in the final pill or injection form—known as a final dosage form (FDF). 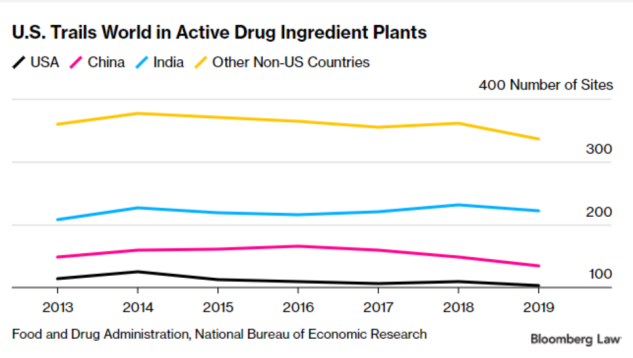 About 13% of active pharmaceutical ingredients generic sites and about 41% of final dosage form sites are in the U.S., according to a 2019 National Bureau of Economic Research working paper.

There could be local regulatory oversight advantages for final product makers “that make it preferable to locate their FDF manufacturing sites closer to the location of final consumption than their API sites,” according to the 2019 paper. 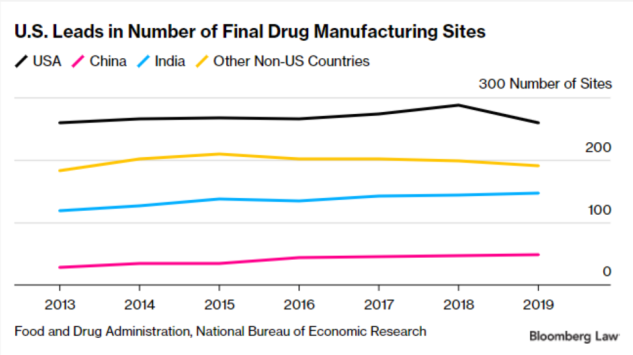 India and China had more active pharmaceutical ingredient sites than the U.S. from 2013 to 2019, according to the 2019 paper.

There are three main ways that the Trump administration can persuade drugmakers to manufacture more pharmaceuticals in the U.S.: investment in facilities, guaranteed government contracts, and grants.

The investments could be in new and existing facilities, and the administration could encourage manufacturing lines to focus on high-priority drugs, Jonathan Kimball, vice president of trade and international affairs at the Association for Accessible Medicines, said. Those investments could include financing current manufacturing capabilities, rehabilitation or expanding plants, and investing in new production facilities.

Guaranteed volume and price contracts with government agencies that directly buy drugs, like the Defense Department, Department of Veterans Affairs, and Federal Bureau of Prisons, would also help encourage onshoring of production, Kimball said. AAM is an industry group that represents generic drugmakers.

The Department of Health and Human Services is working on a plan to restructure and resupply the Strategic National Stockpile after criticism over the lack of adequate supplies during the Covid-19 pandemic. That plan would have manufacturers and medical supply distributors store supplies to protect against future emergency needs. This expanded version of the Strategic National Stockpile could provide an additional market, all of which would provide enough motivation for drugmakers to want to move their manufacturing back to the U.S.,Kimball said.

The administration could provide grants to make these changes, like the recent $354 million contract to Phlow Corp. to make Covid-19 drugs and build new U.S.-based plants for “essential” medicines and pharmaceutical ingredients. The Phlow contract demonstrates that the Trump administration recognizes the need for significant investment in onshoring of manufacturing, Kimball said.

Trade agreements could pose a major problem for the Trump administration. Requirements to move drug manufacturing back to the U.S. could mean re-opening many agreements, consultants and researchers said.

If supply chains are being moved, and not just newly created in the U.S., the U.S. could run afoul of existing agreements, and that could be a World Trade Organization violation, Louissant said. Louissant was the senior adviser to the State Department’s special coordinator for Ebola during the 2014 outbreak.

The State Department and Department of Commerce could go to the WTO in advance and see if they can adjust agreements with the most affected countries, Louissant said.

Otherwise, the U.S. might need to renegotiate all its trade agreements. The drugs that the federal government considers “essential” would determine which trade agreements would be involved.

The list of essential medicines that the federal government constructs would signal to entrepreneurs what they should make, Rena Conti, a professor and associate research director for the Institute for Health System Innovation and Policy at Boston University, said.

The government should look at drugs that are sole-supplied from non-U.S. facilities; rescue medications—particularly those used in hospitals; pain medications used in surgery and trauma; any drugs with national security or bioterrorism uses, which could include vaccines; and products that have no therapeutic substitute, Conti said.

New regulations could help the Trump administration get around the possible trade issues, Jonathan Darrow, a professor at Harvard Medical School, said. For example, if regulations require hospitals to maintain a six-month supply of drugs, then assuring U.S. production capacity could be considered a national security exemption in the trade agreements.

Domestic drugmakers would also have to deal with environmental regulations to ensure more pharmaceutical production won’t affect the air, water, and communities around the facility.

Pharmaceutical manufacturers are subject to specific environmental water and air emission standards, through the Clean Air Act and the Clean Water Act.

New facilities could require pre-construction permits, depending on expected emissions, along with an operating permit under Title V of the Clean Air Act.

Companies also need policies in place on how they’ll treat the wastewater that comes from their production plants to ensure it doesn’t pollute nearby waterways. The EPA sets federal standards, but specific environmental issues for drug plants are largely controlled by the states, according to Mark LeChevallier, former vice president and chief environmental officer at the water and wastewater utility company American Water.

Air emissions from the disinfectant ethylene oxide could be released in larger quantities thanks to increased domestic drug production, according to Louissaint.

While the EPA doesn’t regulate pharmaceutical discharge by individual compounds or drugs, discharge from manufacturing antibiotics could cause microorganisms near a plant to develop antibiotic resistance, LeChevallier said, which makes bacterial infections harder to treat.

At the FDA, only one barrier to increasing U.S. manufacturing of drugs stands out—the time it takes to get approval.

Whether it’s a new factory being built or the transfer of the manufacturing of a product from one factory to another, drugmakers know it will be time consuming. It normally takes about 18 months to move a production line and five to seven years to begin making drugs in a new factory, David Gaugh, senior vice president for sciences and regulatory affairs at the Association for Accessible Medicines, said.

However, Gaugh has seen the approval of moving the production line of a product happen in three days during the Covid-19 pandemic, showing that the FDA can move more quickly if necessary.

Several FDA offices must review manufacturing changes, and AAM’s solution to that backup is to create an intraagency review panel. Gaugh envisions that all the offices would collaborate from day one, working with the drug companies to inspect and review the factories while they are being built or retrofitted to make new drugs. That way, when the factory is ready, the manufacturer can flip the switch and start making drugs.

The FDA can create these efficiencies, but it needs more money and a bigger workforce to do so, Conti said.