A healthcare worker in the emergency room at Oakbend Medical Center in Richmond, Texas, on July 15, 2020.
Photographer: Mark Felix /AFP via Getty Images

A new Texas law that settles hospital payment disputes through arbitration so far favors physicians over health insurers, and illustrates why efforts to pass a federal ban on surprise medical bills have hit a roadblock on Capitol Hill.

The Lone Star State’s surprise billing law (SB 1264) that took effect in January has been a success by some measures, resulting in a 95% drop in consumer complaints about surprise bills and a 70% drop in provider complaints.

But insurers are paying the price. A provision in the law similar to those in New York and New Jersey instructs arbitrators to consider very high charges set by out-of-network doctors. And that is leading to high arbitration payouts, according to data recently released by the Texas Department of Insurance (TDI).

“If we didn’t get it right yet, and I hope we did, but if we didn’t, I want Congress to get it right,” said Stacey Pogue, senior policy analyst with Texas consumer advocacy group Every Texan. Pogue’s group supported the Texas law, but she has concerns about using high billed charges in determining arbitration cases.

About half the states now have passed laws against surprise hospital bills, and Michigan last week became the latest. But the laws in Texas, New York, and New Jersey go further than most in using arbitration to settle disputes. And in all three of those states, out-of-network providers are the clear winners, data shows.

And that issue—arbitration—is a sticking point in the U.S. Congress, where legislation has stalled despite bipartisan agreement in both the House and Senate on a solution that would primarily base payments on median in-network negotiated rates. Powerful doctors’ groups have held off passage, pushing against insurers and employers, who want less reliance on arbitration and more preference for paying rates based on negotiated network charges.

“Federal efforts to address surprise billing stalled over the question of how widely to allow the use of arbitration, supported by provider groups, in light of cautionary tales from New York and New Jersey,” said Loren Adler, associate director of the USC-Brookings Schaeffer Initiative for Health Policy, and co-author of a study finding that policies to address surprise billing could reduce health insurance premiums between 1% and 5%.

And action in Congress is crucial for many Americans, even in states that have their own surprise billing laws. Under the Employee Retirement Income Security Act of 1974, only Congress can impose requirements on self-insured employer plans that could resolve the problem of surprise billing.

Surprise billing laws generally prevent patients from receiving unexpected medical bills, either as a result of emergency treatment, or as a result of an out-of-network doctor billing them for treatment at a network hospital. Those bills, typically for emergency services, anesthesiologists, radiologists, and pathologists, can be in the thousands or tens of thousands of dollars.

The language in the Texas law “is resulting in arbitration payouts that are substantially higher than what average network rates would be,” Jamie Dudensing, CEO of the Texas Association of Health Plans (TAHP), said in an interview. The Texas law instructs arbitrators to consider the 80th percentile of “billed charges.” Billed charges are much higher than rates paid by insurers and employers, and the 80th percentile means 79% of providers charge less and only 19% charge more.

Eighty-five percent of arbitration requests in the first six months of the Texas law were from Team Health, SCP Health, and Tyvan Billing, TDI spokesman Ben Gonzalez said in an email. And 85% of the requests are from emergency physicians, possibly because of the elective surgery ban from Covid-19, according to the TDI six-month preliminary report.

The average arbitration award for emergency room physicians in 818 cases is $660, according to TDI data provided by TAHP. That average includes all levels of complexity.

In contrast, “The most expensive Level 5 average network rate is less than $500,” Dudensing said. The $660 arbitration average for all levels of care, which are intended to reflect the complexity of cases, means “you are substantially paying higher” than negotiated network rates, she said. The high payments are “because they’re basing the awards off of billed charges, not average network rates.” 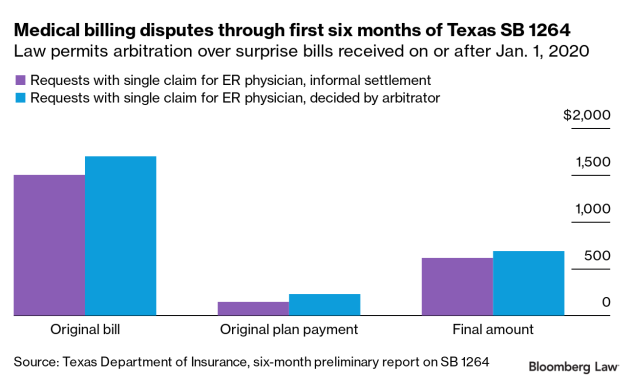 In addition, the cost of arbitration is averaging about $1,000 per claim, “twice as much as the total cost of care,” Dudensing said.

That is happening despite the Texas law’s requirement that one of the 10 factors arbitrators are to consider is fees paid by the health plan for out-of-network providers for the same services.

In the first six months of the year, 12,001 requests for arbitration were submitted in Texas, according to TDI information provided by the TAHP.

Payment decisions by arbitrators for emergency care are only about 40% of the physician’s billed charge, said Clayton Stewart, director of legislative affairs for the Texas Medical Association.

And Texas physicians are concerned that insurers “are low-balling the initial payment to see how little they can get away with and try to drop the overall payment,” Stewart said.

Original payments by insurers averaged $229, compared to $1,699 for the original bill, with a final amount decided by the arbitrator of $688, according to TDI data for emergency services for the first six months of 2020.

Arbitrators must choose between offers by both parties based on which offer is the most reasonable, called baseball style arbitration. Of 1,856 decisions in the first half of the year, 1,227 were in favor of providers and 629 were in favor of health plans, according to TDI data.

The large majority of decisions favoring doctors shows “the insurer is underpaying, and that the physician’s actually kind of in the ballpark of what they need to be charging most of the time,” Stewart said.

In addition, most of the payment disputes are being resolved informally rather than going to arbitration, Stewart said.

The Texas law “evens the playing field between frontline providers and large profitable health insurance companies through a fair rate determination process,” said Team Health, a physician staffing company based in Knoxville, Tenn., in an email.

“On the eve of the effective date of the law, UnitedHealthcare kicked all of TeamHealth’s affiliated emergency medicine clinicians out of their network and began reimbursing at less than half of the previously agreed upon rates,” the company said in the statement.

“Other insurance companies began reimbursing for emergency medicine encounters at substantially lower rates at the same time,” TeamHealth said. “As of the end of September, TeamHealth submitted more than 14,500 claims through Texas’ dispute resolution website largely because health insurance companies continued to pay out-of-network claims at significantly reduced rates compared to historical levels. These 14,500 claims represent 1.1 percent of TeamHealth’s total emergency department volume in Texas through the end of September.”

A UnitedHealthcare spokesperson said in reply: “TeamHealth suggests that unless a health insurer pays its full billed charges for care its out-of-network doctors provide, the bill is somehow ‘underpaid.’ TeamHealth feels it gets to unilaterally decide what reasonable reimbursement is.”

The insurer said TeamHealth’s out-of-network charges are 700% to 800% of Medicare rates. “It’s this sort of excessive pricing from out-of-network providers that contributes to skyrocketing health care costs for everyone.”

Every Texan, the research and advocacy organization based in Austin, has concerns about the arbitration provisions, Pogue said in an interview.

“There’s no doubt that the 80th percentile of charges isn’t moored to any real value of what the price of health care should be, and that’s it’s wildly inflationary, and we will work to get it removed from the law if we can,” Pogue said.

But while the $660 arbitrated payment rate reported by the TAHP is higher than the median in-network rate, “it’s nowhere near the 80th percentile,” she said.

Good data and analysis of surprise bills are needed, Pogue said. “I want Congress to get it right,” she reiterated. “Insurance companies and private equity doctors aren’t coming together.”