The first two lawsuits filed in the wake of a Texas bill that allows private citizens to sue doctors who perform abortions in all but the earliest weeks of pregnancy may have trouble gaining traction.

That’s because the lawsuits against Alan Braid, a San Antonio doctor who wrote a newspaper in which he admitted to violating rules that forbid abortions after about the sixth week of pregnancy, were filed by people who believe the procedure should be legal. Their suits are an attempt to get a judge to toss the law, rather than a bid to just collect the $10,000 bounty it provides to private citizens who take abortion providers and anyone who assists in helping a woman get an abortion to court.

Texas’s law is written so that state officials have no ability to enforce the ban, which must be policed by private citizens through civil complaints. 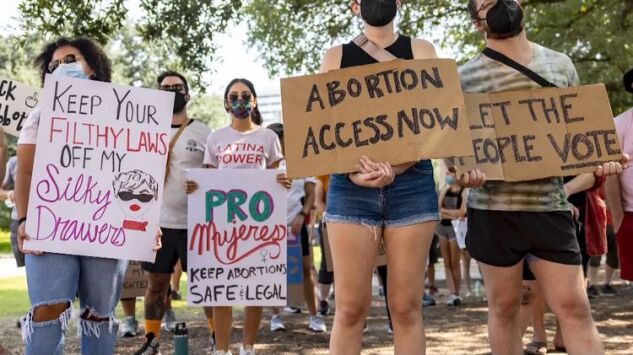 WATCH: The first two lawsuits filed in the wake of a Texas bill that allows private citizens to sue doctors who perform abortions may have trouble gaining traction.
(Source: Bloomberg)

But lawsuits generally must have two sides in disagreement in order to get to trial, making the plaintiffs’ beliefs relevant here. Without that adversity, a judge can throw out the challengers’ petitions before they test whether the law violates the constitution, according to Josh Blackman, a constitutional law professor at South Texas College of Law Houston.

“It seems both the doctor and these plaintiffs are on the same side of the fence,” Blackman said in an interview. “Braid was baiting a case, no question. But this is not the case he wanted.”

Braid painted a target on himself with the column and essentially dared anti-abortion activists to chase him to the courthouse. He wrote in the op-ed piece that he expected to be sued and would use the lawsuit to challenge the constitutionality of Texas’s law, which bans all abortions once cardiac activity can be detected in the fetus. But to do that, the plaintiffs may need to be someone who actually supports the law and wants to stop abortions in Texas.

John Seago, the legislative director at Texas Right to Life, said in a phone interview Monday that the two lawsuits represented “desperate” moves by “friendlies” trying to jump-start a constitutional challenge to the law.

Seago said he won’t take Braid’s bait and sue until he’s fully investigated the doctor’s abortion claim. Seago said he’s wary of pro-choice plaintiffs or ill-conceived lawsuits, as either could yield a courtroom loss that blocks the law or sets a precedent making it harder for anti-abortion forces to win subsequent challenges.

“We definitely lose if a lawsuit is filed imprudently,” Seago said. “That’s why you didn’t see us jump out there.”

Clinics and their supporters are eager to break the courthouse stalemate that’s keeping the law in force. Pro-choice groups sued Texas officials in July to try to block the law before it took effect Sept. 1. But a panel of federal appellate judges -- backed up by the U.S. Supreme Court, which declined to step in at this stage -- cleared the way for the law to take effect because the clinics were suing public officials in advance, the wrong people at the wrong time. That challenge is presently languishing at the Fifth Circuit appeals court in New Orleans.

The appellate decisions indicated the clinics must wait to be sued by a private party in order to attack the law in court. The Justice Department has sued Texas directly challenging the law’s constitutionality, but that case won’t get its first hearing before a trial judge until Oct. 1.

Oscar Stilley, a disbarred Arkansas lawyer currently serving home confinement on a tax-fraud conviction, said he filed one of the suits against Braid specifically to force the constitutional issue to a head, though he also said he’d gladly claim the bounty if he wins.

“What I’m doing is giving the courts a straight shot at it,” Stilley said in an interview, adding he supports a woman’s right to choose. “Let’s have an honest decision on it. I want justice to be done.”

The other plaintiff -- Felipe M. Gomez, a disbarred lawyer from Illinois -- in his complaint asked the court to “declare that this act is unconstitutional and in violation of Roe v Wade.”

Amy Hagstrom Miller, president of Whole Woman’s Health, a plaintiff in the pro-choice challenge at the Fifth Circuit appeals court, said by depriving the clinics of formal protagonists, anti-abortion activists have been winning by not suing.

“We’re all complying with the law, and that’s what they were looking for,” she said.

“Somebody needs to push back,” she added. “We’re hopeful we might get something to shift here.”

Braid’s public defiance has put the opposition in a put-up or shut-up bind, especially given Texas Right to Life’s aggressive fundraising campaign pegged to what it promised would be robust litigation efforts.

“It sure makes their fundraising and bravado look like a tactic and not real,” Hagstrom Miller said.

Seago said his group’s fundraising campaign supports Texas Right to Life’s defense of 14 lawsuits so far by abortion advocates seeking protection from potential challenges he might file. The donations also pay for lawyers parsing hundreds of email and phone tips “from all over the state” on potential violations.

“If we have credible evidence, we’ll be able to move very quickly,” he said.

Neither Seago nor Hagstrom Miller take the two lawsuits filed against Braid by pro-choice supporters seriously.

Braid declined request for comment, but the Center for Reproductive Rights said it is covering his defense.

“We stand ready to defend him against the vigilante lawsuits” the Texas ban “threatens to unleash against those providing or supporting access to constitutionally protected abortion care,” , the chief executive officer of the Center for Reproductive Rights, said in a statement.

(Updates to add details of Gomez lawsuit in 14th paragraph)

To contact the reporters on this story:
in Orwell, Vermont, at lcalkins@bloomberg.net;
in Arlington at ldavenport15@bloomberg.net