States are looking for ways to extend telehealth coverage while addressing concerns about possible abuses.
Photo by Sebastian Gollnow/picture alliance via Getty Images

States around the country are racing to find the best way to promote continued use of telehealth as they navigate concerns over the potential for overuse and abuse.

More than two dozen states have introduced some form of “payment parity”—paying doctors and other medical providers the same for online and in-person services—in order to create incentives for providers to continue offering telehealth services.

The use of telehealth has grown exponentially since the start of the Covid-19 pandemic, leading to a paradigm shift in the way patients and providers utilize and provide health care. But that rise has been accompanied by concerns about the potential for overuse and billing abuses.

The number of Medicare visits conducted through telehealth in 2020 increased 63-fold, from about 840,000 in 2019 to 52.7 million, according to the Department of Health and Human Services’ Office of the Assistant Secretary for Planning and Evaluation.

The growth of telehealth has led to a rise in dubious billing practices from providers, said Patricia King, attorney for the Malecki Brooks Law Group, a law firm that represents physicians and hospitals.

“You have some entities getting into this space and who are not as qualified, or are taking advantage of this and providing services that are maybe less than ideal, milking the system and getting money as opposed to providing really needed quality services,” she said.

For many low-income and rural Americans, telemedicine serves as an essential lifeline, allowing access to medical services that were traditionally out of reach due to geographic and fiscal limitations.

Although the concept of payment parity for telehealth services has been around since the 1950s, the idea didn’t begin to take off with policymakers until 2020, when stay-at-home orders made many in-person visits impossible.

As an incentive for physicians to continue providing services online, the Centers for Medicare & Medicaid Services began reimbursing Medicare providers at the same rate as they would in a traditional office setting. Other insurers followed suit.

Many providers believe payment parity is the only incentive that could offset the risk of providing medical treatments online, said Robert Sprang, director of Kentucky TeleCare, which provides telehealth coverage to rural communities through the University of Kentucky College of Medicine. 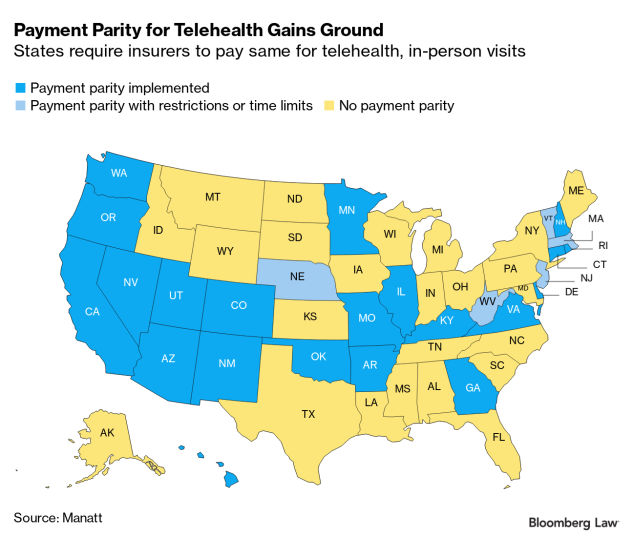 While telehealth provides convenience for patients, the medium presents an additional layer of challenges for doctors trying to provide accurate diagnoses, Sprang said.

“Imagine a dermatologist, who has some kind of retinal disease and rapidly deteriorating vision, or a cardiologist that is having hearing loss and can’t articulate the heart and lung sounds to the patient,” he said.

“When a clinician sees a patient, they are putting their clinical license on the line every time.”

In spite of its popularity, payment parity has been a contentious source of debate among telemedicine policymakers.

Apprehension toward payment parity among states boils down to one implied notion: the cost of payment parity outweighs the value of the services being provided, said Kyle Zebley, senior vice president of public policy at the American Telemedicine Association.

Opponents contend that lower costs for virtual care would “save the system money, be more efficient, drive savings for payers and allow for an increase of resources that could be used elsewhere in the health-care system,” Zebley said.

“The advocates for payment parity say that if you’re going to continue to have providers offering services, they need to have the exact same incentive for in-person care as compared to virtual care,” he said.

The potential additional costs of payment parity have pushed several states, including Florida, to stay away from offering “full payment” telehealth services.

In addition, the possibility of widespread fraud has prompted many states to implement “guardrails” for telehealth. The HHS Office of Inspector General in September found over 1,714 providers engaged in billing that may indicate fraud and abuse. All of the providers “had concerning billing on at least 1 of 7 measures we developed that may indicate fraud, waste, or abuse of telehealth services,” the report said.

Aguiar-Curry is the author of the recently passed Assembly Bill 32, which ensures payment parity for phone, video, and asynchronous patient monitoring. It was signed into law in September by Gov. Gavin Newsom (D).

The state law is one of the more robust of its kind, offering full payment parity on all telehealth services— even audio-only calls, which have been a point of contention for lawmakers across the country due to concerns over possible overuse.

For Aguiar-Curry, the solution wasn’t to add arbitrary regulations that governed the way telemedicine could be utilized. Instead, the bill put the onus on doctors to ascertain whether or not a service was acceptable according to the applicable standard of care for medical professionals.

“There are rigorous guardrails in place if you’re talking about the practice of medicine,” Zebley said. “It is up to the licensed medical professional to determine consistent with the standard of care whether or not an audio method of delivering care is appropriate.”

Aguiar-Curry said lawmakers in other states—including Indiana, Tennessee, and Oregon—have looked into the merits of Assembly 32 as they navigate the restructuring of their state telehealth policies.

To contact the reporter on this story: at gbelloni@bloombergindustry.com