The U.S. Supreme Court’s conservatives suggested they are poised to roll back abortion rights and uphold Mississippi’s ban after 15 weeks of pregnancy, as the court tackled its most consequential reproductive-rights case in a generation.

In an argument that lasted almost two hours, all six Republican-appointed justices indicated they would let states start banning abortion far earlier than the court’s precedents now allow. Under a 1992 ruling, states can’t impose significant obstacles before fetal viability, which the court suggested was around 23 or 24 weeks at the time.

“If it really is an issue about choice, why is 15 weeks not enough time?” Chief Justice asked the lawyer challenging the Mississippi law on behalf of the state’s lone abortion clinic.

Two other key justices, and , suggested they might go further and overturn the landmark Roe v. Wade ruling, which legalized abortion nationwide in 1973. Kavanaugh listed a series of famous cases, including decisions that outlawed school segregation and legalized gay marriage, that overturned precedents. 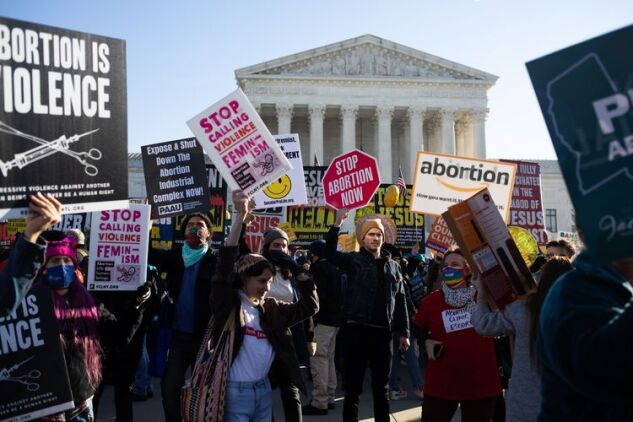 “If we think that the prior precedents are seriously wrong -- if that -- why then doesn’t the history of this court’s practice with respect to those cases tell us that the right answer is actually a return to the position of neutrality?” Kavanaugh asked.

Even if the court doesn’t explicitly overturn Roe and the 1992 Planned Parenthood v. Casey ruling, a decision upholding Mississippi’s law would have a far-reaching impact. It would give states new license to curb abortion access, guaranteeing tighter restrictions in much of the country, and invite a stream of follow-up cases over bans that apply earlier in pregnancy.

More than 20 states have banning at least some pre-viability abortions, many of them currently being litigated in lower courts. Should the Supreme Court explicitly overrule Roe, a dozen states -- including Mississippi -- have laws designed to automatically take effect and outlaw almost all abortions.

Barrett questioned the contention by abortion-rights advocates that women would be forced into bearing the burden of parenthood if they couldn’t terminate a pregnancy. She said all 50 states have “safe haven” laws that let women relinquish their parental rights and put a baby up for adoption after giving birth.

“Why don’t the safe haven laws take care of that problem?” asked Barrett, who has two adopted children.

Liberal justices suggested a decision gutting Roe and Casey would undermine the court’s legitimacy. Justice said Mississippi lawmakers said they were motivated to pass tighter abortion restrictions, including a 6-week ban in the state that isn’t directly at issue in the case, because of changes in the Supreme Court’s membership. The newest justices, Kavanaugh and Barrett, both replaced members who had largely backed abortion rights.

“Will this institution survive the stench that this creates in the public perception that the Constitution and its reading are just political acts?” Sotomayor asked. “I don’t see how it is possible.”

Justice pointed to a passage in the Casey ruling that said overruling a watershed decision like Roe would “subvert the court’s legitimacy beyond any serious question.”

Mississippi Solicitor General Scott Stewart said Roe and Casey “haunt our country” and have no basis in the Constitution. “For 50 years, they’ve kept this court at the center of a political battle that it can never resolve,” he argued.

Julie Rikelman, the Center for Reproductive Rights lawyer representing the clinic, that women have come to depend on the availability of legal abortion.

“Eliminating or reducing the right to abortion will propel women backward,” she said. “Two generations have now relied on this right, and one out of every four women makes the decision to end a pregnancy.”

“The court has never revoked a right that is so fundamental to so many Americans and so central to their ability to participate fully and equally in society,” she argued.

Biden told reporters he didn’t listen to the arguments. “I support Roe v. Wade,” he said. “I think it’s the rational position to take, and I continue to support it.”

Outside the courthouse, hundreds of demonstrators on both sides of the issue gathered on the sidewalk and street. Signs held by abortion rights supporters read “Abortion is health care” and “Grow abortion power.” Abortion opponents carried placards that said “Abortion is wrong” and “Life is a human right.”

The 7-2 Roe decision said abortion protections were covered by the “right to privacy,” a doctrine the court established in earlier cases, though the Constitution doesn’t expressly use those words. The court reaffirmed Roe in Casey, while modifying the legal test.

Roberts was alone among the conservatives in focusing on Mississippi’s 15-week limit. He said 15 weeks was “the standard that the vast majority of other countries have” and said the U.S. shared the viability line with China and North Korea.

Rikelman told Roberts he was wrong about laws elsewhere, saying that most countries that have legal abortion permit it until the point of viability. Moving the line to 15 weeks would be “cutting the time period to obtain an abortion roughly in half,” and prevent some women from having the procedure in time, she said.

In response to Barrett’s adoption question, Rikelman said the burden on a woman isn’t limited to parenthood but also imposes physical demands and risks and affects their ability to work and care for other children.

Justices , and all signaled they were ready to jettison Roe and Casey entirely. Alito pressed Prelogar to concede that the court would have been right to immediately overrule Plessy v. Ferguson, the 1896 ruling that allowed state-sponsored racial segregation until it was overruled in 1954 by Brown v. Board of Education.

“Would it not be sufficient to say that was a grievously wrong decision on the day it was handed down and now it should be overruled?” Alito asked.

Gorsuch asked Prelogar whether there were any other “intelligible principle” the court could adopt if it eliminated viability as the standard.

“I don’t think there’s any line that could be more principled than viability,” Prelogar responded.

The court is separately deliberating over a Texas ban that applies at about six weeks. The Texas cases don’t directly address Roe and Casey, instead centering on the state’s effort to insulate the law from judicial scrutiny.

The Mississippi case is Dobbs v. Jackson Women’s Health Organization, 19-1392. The court is scheduled to rule by late June.