State laws aimed at forcing the pharmaceutical industry to account for rising prescription-drug costs have done little to dampen price increases, in part because the companies skirt robust disclosure with relative impunity.

At least 11 states have laws requiring manufacturers to provide data on drugs’ costs, warnings before some prices increase, and justifications for changes. But many companies are complying only partly or not at all, saying the information is confidential under federal law, and some of the laws have few or no enforcement powers, Bloomberg Law found.

The companies’ actions come amid congressional gridlock over controlling prices and the drug industry’s fight over the Trump administration’s efforts to force them to disclose list prices in TV ads.

“The federal government is moving as fast as it can on these pieces but drug prices are continuing to rise, even with more pressure” from the public, said Justin Mendoza, who works with the nonprofit Families USA to develop state campaigns to lower health care costs. “Price increases are baked into their business model,” he said, and “public pressure alone isn’t forcing their business model to change.”

To be sure, several states say their laws have gotten results. New York, as of January, said it had negotiated 30 rebates with drug companies, saving more than $85 million. Nevada and California have fined companies to track down late or missing information.

Supporters of state transparency laws say they’re the first step in identifying why drug costs are increasing and that knowing about increases beforehand can help big purchasers negotiate.

A chorus of policymakers saying “you can’t do that” helps curb price hikes, said Vermont state Rep. Anne Donahue, a Republican who was vice chair of a legislative health care committee when that state’s law was passed. It requires drug manufacturers to report various data including justifications for price increases.

“Being one state and then having other states and public attention on the dramatic, seemingly unjustified increases, I think the attention it brought helped some of those get pulled back,” she said.

All of the manufacturer-focused state laws analyzed by Bloomberg Law require disclosure rather than regulate drugs’ base prices. Maryland tried the latter approach but a federal court ruled its anti-price-gouging law illegally regulated interstate commerce.

States mostly require manufacturers to report the wholesale cost of their products and why they raised prices above a designated threshold. Several laws include carve-outs that don’t require companies to report proprietary information or go beyond what’s in the public domain. 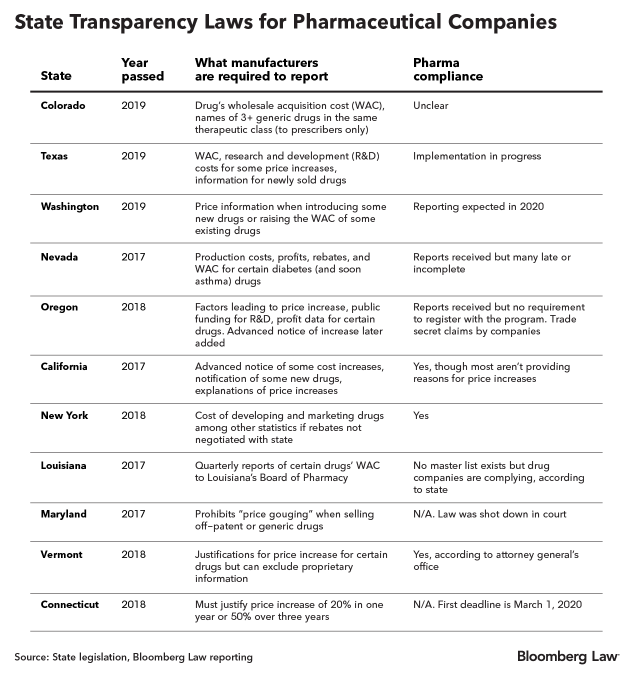 Many of the states also have transparency requirements for insurers, pharmacy benefit managers, and others that influence drug costs. Some have tried other methods of reducing costs, such as Colorado’s cap on co-pays for insulin.

The idea is to collect neutral information about an opaque supply chain in which every player says it isn’t the root of rising prices, said Nevada state Sen. Yvanna Cancela, who sponsored a law requiring reporting on certain diabetes medications and, later this year, asthma drugs. Pharmaceutical companies argue they already have to disclose a lot of information because many of them are publicly traded.

The leading lobbying group for brand-drug companies, PhRMA, has sued over a number of the state laws. A complaint filed in Oregon Dec. 9 argues that state’s law requires manufacturers to disclose trade secrets. PhRMA also sued over California’s and Nevada’s laws, though it dropped the latter effort after the addition of confidentiality provisions.

Priscilla VanderVeer, a PhRMA spokeswoman, said consumers don’t care enough about the information companies are required to provide to offset the damage of disclosing trade secrets. “They want to know, ‘Is the medicine I need covered by my insurance company?’, and ‘What is my out of pocket?’” she said of the surveys PhRMA has taken of consumers.

Laws like California’s that require companies to give advanced notice of price increases put companies and the public in a precarious position, VanderVeer said.

“When you signal a price increase that encourages some less-than-high-quality people in the system to buy up the product at the lower price... That could potentially limit the supply and create a shortage,” she said.

The approach that New York says worked requires drugmakers to report financial information if they fail to negotiate a supplemental drug rebate for the state, according to the state’s Department of Health. Health officials say they consider those financial reports proprietary, however, making the law less about price transparency and more about using disclosure as leverage.

The California law requiring advanced notice of cost increases for drugs that meet certain thresholds has likely kept prices lower than they would have been without it, said Mendoza from Families USA. Bloomberg reported several drugmakers rescinded planned cost hikes in 2018, but new data shows so far this year drugmakers raised prices on medications by an average of 5.3%.

“A number of companies decided not to increase price beyond what would trigger California’s transparency law,” Mendoza said.

Several companies, including Teva Pharmaceutical Industries Ltd., Mylan NV, and Par Pharmaceutical Holdings Inc. declined in some disclosures to provide reasons for price increases or information about other marketing tactics, citing trade secret or proprietary protections. Most state laws, including Vermont’s, allow companies to protect what they consider proprietary information.

PhRMA said it couldn’t comment on specific companies’ actions, and what they decide to disclose or not is their choice. When asked for comment, Mylan referred to a recent statement from the Association for Accessible Medicines, the lobby group for generic drugs.

Companies that don’t comply with transparency laws face penalties from $1,000 to $10,000 a day in a handful of states, though not all have fines. Nevada has cited roughly two dozen companies and asked them to pay about $24 million, though many have since provided information and are in dispute resolution with the state.

Only about half of impacted drug manufacturers in Nevada reported on time in 2019, with some citing staff turnover or unfamiliarity with the law, said Scott Jones, who previously worked with the drug price transparency program in the state’s Department of Health and Human Services.

California regulators sent 17 penalty notices for late reports totaling nearly $11 million in fines, according to Jan. 22 data released to Bloomberg Law under the state’s public records law. Five companies paid in full, while others reached settlements to pay reduced amounts or nothing, or are still appealing.

Additionally, most drug manufacturers reporting to California didn’t give reasons for price increases in the last reporting period, and they aren’t required to if the data isn’t in the public domain.

Louisiana has no penalties for noncompliance and doesn’t track which manufacturers are following transparency provisions. Oregon has no requirement that companies register with the program, which a recent analysis by program staff recommended changing to increase compliance.

Enforcement of Colorado’s law, which requires manufacturers to provide a drug’s wholesale acquisition cost to prescribers, is complaint based. No complaints were received as of early January, according to the state board of pharmacy.

The onus is on doctors hearing from manufacturers or their marketers to know what information they should receive and to raise the red flag if they don’t, said Adam Fox, director of strategic engagement for the Colorado Consumer Health Initiative, which supported the legislation.

“It’s hard to know how well this law is being followed,” he said.

State officials say they hope initial transparency laws can lead to bigger changes. The approach follows a physician’s process to “diagnosis and then treat” a problem, said Texas state Rep. Tom Oliverson, an anesthesiologist who sponsored a recent drug price transparency law that has yet to report manufacturer data.

Several states have analyzed initial data to draw conclusions on what types of drugs are rising in cost and why—new information supporters say will influence legislation in the coming years. Additional states collecting data in the coming year may shed more light on how effective these laws are.

Nevada legislators, for example, plan on using data collected through its transparency law to write and introduce new drug price bills in 2021, said Cancela, the state senator. The existing law is achieving its goal of collecting accurate and neutral data, she said.

“It’s been helpful to see all that data together,” Cancela said.

In California, advocacy groups want to work with the state on ways to make manufacturers “more forthcoming” about price increases, said Anthony Wright, executive director of Health Access California, which supported California’s law. His group is also looking at other ways to strengthen the law, such as including more drugs in the reporting.

“Some of our work is trying to figure out what is doable at the state level,” Wright said.five