U.S. health experts say a force of as many as 300,000 contact tracers is crucial for coast-to-coast reopening in the wake of the new coronavirus. So far, though, the country has a far smaller ragtag army that’s many weeks, if not months, from full deployment.

North Carolina, which is targeting unemployed people with high-school educations, received about 1,500 applications for 250 positions in just 24 hours.

“That shows you that there are a lot of people out of work,” said Paul Mahoney, a spokesperson for the program’s coordinator, Community Care of North Carolina. Five weeks into the pandemic, a record 26 million Americans had filed for unemployment benefits, more than 875,000 in North Carolina.

That wave of desperation explains why Texas, Georgia and other states are stirring to life this week. Governor said Tuesday that Utah will reopen in a limited capacity Friday, including gyms, salons and dine-in restaurants so long as they “exercise extreme precautions,” and Wyoming will do likewise. California Governor is considering opening schools as early as July to make up for lost class time. 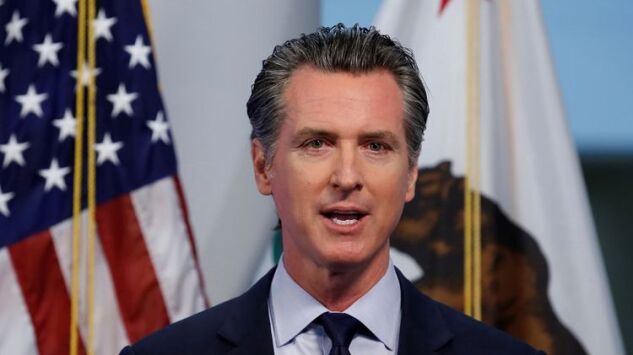 WATCH: California Governor Gavin Newsom says the state, which has closed schools for the academic year, is considering bumping up the start of the new school year to late July or early August.
Source: Bloomberg)

But experts say long-term stability won’t come without a way to quickly spot Covid-19 outbreaks and stop them. So the U.S. -- with the world’s richest economy, but a flagging public-health system -- is asking trainees to press total strangers: Where have you been, for how long, and who else was there? And their phone numbers, please?

“This is a workforce that needs to be scaled up right now,” said David Harvey, executive director of the Washington-based National Coalition of STD Directors, longtime practitioners of tracing for sexually transmitted diseases. “There’s no time to waste.” 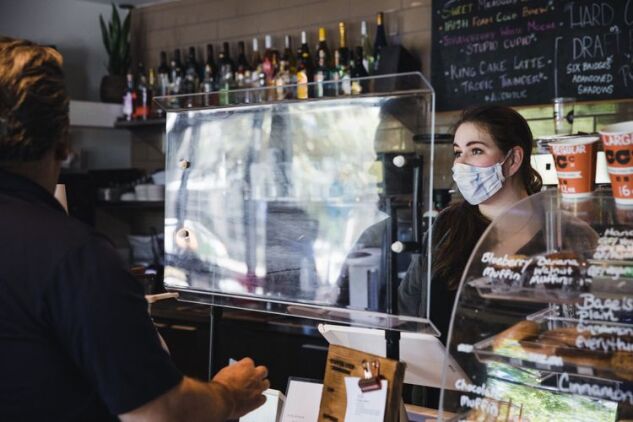 A worker wearing a protective mask stands behind a plastic shield in Woodstock, Georgia on April 27.
Photographer: Dustin Chambers/Bloomberg

In all, America could use 300,000 tracers and specialists, according to , a former U.S. Centers for Disease Control and Prevention director and New York City health commissioner. By comparison, the New Deal’s Civilian Conservation Corps employed about 500,000 people at its peak.

“Early in the outbreak, many health departments began systematic contact tracing but rapidly became overwhelmed,” Frieden said in an email. “Now that cases are coming down in some areas, we have to trace contacts in a simple, more scalable way.”

Lacking clear guidance from President -- and with no commitment on an estimated $12 billion needed to stand up a national program -- state and local government leaders are assembling ad hoc workforces. So far, the federal government has promised just $631 million for the effort.

In Massachusetts, with more than 58,000 cases, Governor Charlie Baker has budgeted $44 million for 1,000 tracers. Of the 33,000 applicants, about 800 have been hired, and plans now call for a team of up to 1,400, according to John Welch, a director for Partners in Health, which is overseeing the program.

“This is all going to be phone calls, not just some automated bot,” , chief medical officer for Partners in Health, said in an interview. “We want phone calls, people to feel cared for.”

Workers are contacting everyone who within the past two weeks has spent 15 minutes within six feet of someone with Covid-19, Baker said. In two weeks, more than 6,000 cases have been worked on, according to Partners in Health.

One early problem: getting contacts to pick up the phone. Tracers suspect some are ignoring the calls, so officials have been working with telecom companies to make sure that “MA COVID Team” pops up on caller ID.

Massachusetts is far ahead of several other members of a seven-state Northeastern coalition whose governors are making regional reopening decisions.

Connecticut will use 300 state health employees and as many as 500 academic volunteers, but Governor said Tuesday the system won’t begin running until the third week of May.

Estimates of how many tracers are needed vary widely. New Jersey Governor said a proper program would require as many as 7,000 to serve 9 million people. Next door, Governor said New York needs roughly 5,700 for 19.4 million residents.

Some states are hardly so demanding.

“The basic idea is simple: Track down infected people, then find everyone who has been near them and encourage those people to stay home until it is clear they are not sick,” says a ZipRecruiter.com ad for the state of Texas. 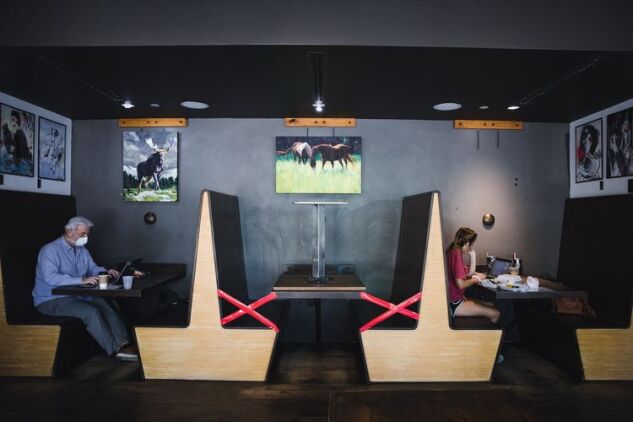 A bench is taped off to ensure social distancing at a coffee shop in Woodstock, Georgia, on April 27.
Photographer: Dustin Chambers/Bloomberg

Since the Great Recession, the country has lost 50,000 public-health jobs, according to an April 22 “Coronavirus Containment Corps” proposal by U.S. Senator Elizabeth Warren of Massachusetts and U.S. Representative Andy Levin of Michigan, both Democrats. By May’s end, they want the CDC to report to Congress on hiring a national contact-tracing team, and to pay state and local governments to carry out the strategy.

Meanwhile, the states forge on.

California’s Newsom, who wants a force of 10,000, this week said 22 of 58 counties have “robust tracing capacity.” California has been tracing tuberculosis, measles and AIDS for decades. “We’re building off that local expertise that already exists,” he said.

West Virginia University will offer a 14-hour online course to train as many as 300 tracers, ideally National Guard members or those with health backgrounds. But the force will be unpaid, according to Allison Adler, a spokesperson for the state health and human resources department.

“By initially focusing on volunteers and students we will be able to assess the feasibility, sustainability and need for paid employees,” Adler said.

Rhode Island has 150 National Guard troops and health employees working on tracing and is using SurveyMonkey technology to help determine whether contacts are ill -- and if so, to track the disease’s progress, Joseph Wendelken, a state health department spokesman, said in an email.

In Alabama, where Governor plans a Thursday reopening, a crew of 50 to 60 has pitched in to help 10 health department staffers who regularly do tracing.

“Until we have a vaccine or at least an effective treatment, we’ll have to scale that up quite a bit,” said Scott Harris, the state’s health officer.

The U.S. needs far more than mere bodies, said Harvey, the National Coalition of STD Directors chief. It needs a system to track state tracing capacity, he said, and far more higher-level professionals called disease-investigation specialists. Every 10 tracers, he said, will need such a specialist. Only 2,200 exist nationwide.

“You can’t just turn this on overnight,” Harvey said.

(Updates with data from Massachusetts and Rhode Island)