Dr. Alan Chun checks on a patient who suffered a fall at the International Community Health Services medical clinic in their assisted living facility, the Legacy House, in Seattle.
Photo by Karen Ducey/Getty Images

A central component of President-elect Joe Biden’s health plan—a government-run insurance system that would compete with private plans—augers a rocky start based on one state’s experience with such a scheme.

Washington state’s first-in-the-nation program is resulting in higher premiums than private-sector plans in many instances, the opposite of what was forecast about a “public option” by proponents.

The Washington-sponsored Cascade Care Select plans that go into effect Jan. 1 feature standardized benefits that reduce deductibles and other out-of-pocket costs more than traditional private plans. But monthly premiums are the gold standard for measuring the health of an insurance market, and other savings stemming from the public plans won’t signal a complete success.

Like Obamacare, however, health analysts say the plans are new and the market needs to adjust to their presence. Obamacare premiums increased for several years before leveling off. Launching a public option in the middle of a global pandemic doesn’t help, observers say.

Frederick Isasi, executive director of the health-care advocacy organization Families USA, sees the Washington state example as being “the heart of the whole public option fight, which is: we are not getting a good deal in our health insurance.” Isasi worked for Senate Democrats on a public option plan when the ACA was negotiated.

The public option plans offered through Washington’s Affordable Care Act exchange cost as much as 29% more than traditional plans, based on the most popular type of policies, according to data from the Washington Health Benefit Exchange (WHBE). Because their payment rates are based on Medicare rates, public option plans have been touted as cost saving for enrollees. 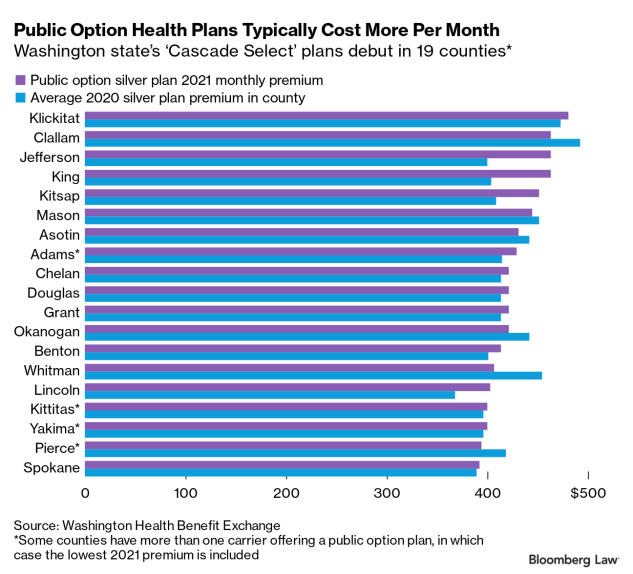 The public option plans are sold and administered by health insurers.

For 2021, public option plan premiums for 40-year-olds on the Washington Healthplanfinder exchange range from about $400 a month for nonprofit Community Health Network of Washington to about $463 a month from UnitedHealthcare of Oregon, which is 29% higher than the lowest cost silver tier plan, according to WHBE data. The prices are before any premium tax credits are applied.

The lowest-cost silver tier public option plan offered in Washington state is available in Spokane County from Community Health Network of Washington (CHNW) and costs $392 a month for an unsubsidized 40-year-old. Silver tier plans cover about 70% of medical claims in the state.

Some plans, such as CHNW’s silver tier plan in central Washington, were the lowest cost plan in their category, Leah Hole-Marshall, general counsel and chief strategist for the WHBE, said in an interview.

“But it is true to say that it didn’t lower in Year One to the point that we would have liked,” she said. One plan executive said in August they were shooting for costs between 5% and 10% lower than traditional plans.

Deductibles for standard benefit design plans, which Washington’s public option plans include, are on average $1,000 less than other plans, Michael Marchand, chief marketing officer of the WHBE, said in an email. In addition, market-wide premiums for Washington’s plans are down nearly 2% for 2021, he said. About 200,000 people enrolled in Washington’s exchange in 2020.

“The premium doesn’t tell the true affordability story,” Marchand said in an interview. Because public option plans generally have lower deductibles, he said, “You get more bang for your buck” from them.

When the ACA was enacted in 2020, proponents of the public option couldn’t overcome arguments that the plan would lead to a slippery slope of a government takeover of health coverage.

Most public option proposals intend to pay at Medicare rates, Nina Schaefer, senior research fellow with the conservative Heritage Foundation, said in an interview. “The problem is you can’t get provider participation,” she said. Washington had to increase payments to `160% of Medicare rates, raising premiums. “That defeats the purpose of why they’re actually even offering a public option.”

Colorado and New Mexico have looked into adding a public option to their state plans, but they haven’t been able to get it over the line, Schaefer said. Schaefer was co-author of a report saying a public option plan will lead to a government-run single-payer plan.

Hospitals opposed the 2019 law that created Washington’s public option program and they were difficult to negotiate with during the pandemic, state Sen. David Frockt (D) said in an interview.

“We have major hospital systems that have not wanted to participate in Cascade Select plans, and that is a real barrier,” said Frockt, the chief sponsor of the 2019 law creating the public option.

“It’s a mixed picture,” Frockt said. “The standardization’s really important. I think on the premium side, we’re not where we want to be,” he said. Covid-19 made it difficult to negotiate contracts, he said. Many hospitals have suffered financial losses due to pandemic-related shutdowns, and would likely have had to agree to lower rates under a public option plan than most commercial plans offer.

“Given the unique environment we’re in, the carriers, I believe, priced pretty conservative around these products, not knowing necessarily what might transpire in 2021,” Marchand said in an interview. “There might be a lot of individuals who will be buying coverage this year with an eye toward taking on some of those elective services that they maybe put off in 2020 in order to have them done in 2021,” he said.

In addition to CHNW and UnitedHealthcare of Oregon, public option plans are being offered in the state by LifeWise Health Plan of Washington, part of Premera Blue Cross; Coordinated Care Corp., owned by the Centene Corp.; and Bridgespan, an affiliate of Cambia Health Solutions.

“Part of the reason why these plans aren’t dramatically cheaper is that the whole market kind of stayed flat or even decreased over the last couple years,” Chris Bandoli, executive director with the Association of Washington Healthcare Plans, said in an interview. That may have resulted in less of a savings “as folks might have initially been planning.”

In addition, “They’re new products,” Bandoli said. “If you just can’t quite quantify your risk, you may be inclined to be a little more on the conservative side with how you price your product.”

The standard benefit design that the public option plans feature “pushed a lot more coverage to be pre-cost sharing, or at least lower cost-sharing, and to a degree, when you do that you’re just moving the cost-sharing to the premiums,” Bandoli said.

In addition, many traditional plans have developed narrow networks that provide discounts that the public option plans may not have been able to provide, Bandoli said.

“We’ve got a long way to go—the collective we—in reducing health-care costs,” Bandoli said. “This legislation took a moderate stab at trying to control that, and may have to some extent with the reimbursement cap. But health care is still really expensive. It’s still getting more expensive. And until that changes you’re not going to see dramatic decreases in the costs regardless of who’s administering or financing the coverage.”