Health-care transactions lagged in July due to headwinds from Covid-19, but year-to-date deals are well ahead of the same period last year, attorneys and analysts say.

The pandemic will likely have an impact on the market beyond the end of the year, according to Epstein Becker & Green attorneys and health industry financial/investment analysts at KPMG and FocalPoint Partners.

The 129 deals announced or closed in July were down slightly from 144 in June and from 161 in July 2019, but they’re still above the monthly average for the second quarter, Larry Kocot, a principal and national leader at KPMG LLP in Washington, said. The 959 deals from January through July are well ahead of the 747 for the same period of 2019, with the largest increase continuing to be in life science and pharmaceuticals, and the biggest decrease in long-term care, he said.

Health IT and software deals were the second most numerous in July (19) and year-to-date (131), following life science and pharmaceutical deals (23 in July and 191 year to date). Life science deals benefited from the focus on new vaccines and treatments, Herschman said.

The third highest number of deals was in the medical device/supply sector, which was bolstered by the need for personal protective equipment, he said.

“We still expect strong activity in the last several months of 2020 with respect to hospitals and physician groups partnering with larger health systems and national physician services companies, including private equity platforms, all of which have substantial capital and highly professional corporate infrastructure,” Herschman said. 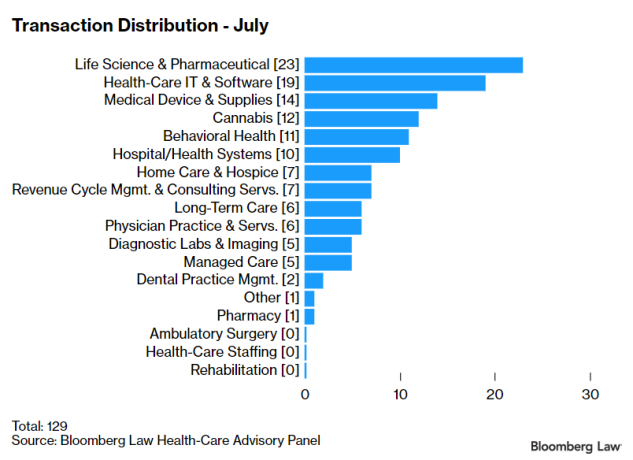 KPMG in Washington and FocalPoint Partners of Chicago prepared the curated year-to-date list and the list of select July transactions for Bloomberg Law.

Ten hospital/health system transactions were announced or closed in July, bringing the year-to-date total to 66.

Two deals announced in July that highlight the trend are the merger of Huntington Hospital and Cedars-Sinai Health System in Southern California, and the merger of Northwest Community Healthcare and NorthShore University HealthSystem in the greater Chicagoland area, Torres said. 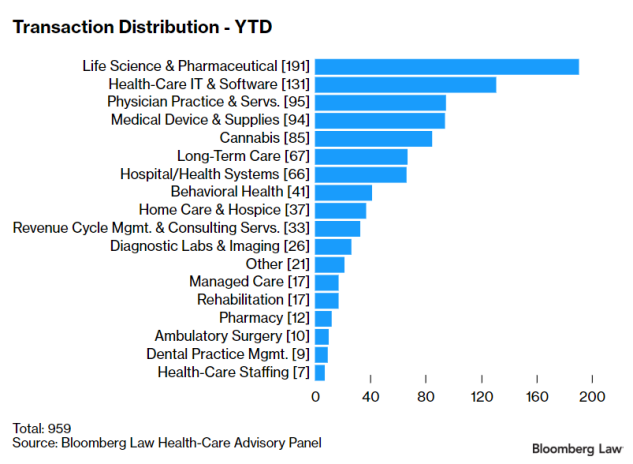 Six physician practices and services transactions were announced or closed in July, bringing the year-to-date total to 95 deals.

“Notably, there were not any ‘blockbuster’ deals announced in July,” as the majority of the transactions were specialty physician practices—such as eye care and gastroenterology services—being acquired by larger companies, Aaron Newman of FocalPoint Partners in Chicago, said.

“We expect this trend to continue of smaller, specialty physician practices being acquired by larger private equity-backed and/or for-profit strategic entities, as a result of smaller practices being disproportionally financially and operationally impacted by COVID-19,” Newman said.