Health-care mergers and transactions surged in August, led by activity in the pharmaceutical and medical device sectors.

There were 166 deals in August alone. That number was the highest since January, attorneys and health-care analysts reported.

Investment activity may be accelerating as the industry and the U.S. continues to respond to the economic disruption caused by the global Covid-19 pandemic, according to Larry Kocot, a principal at KPMG LLP and national leader of the firm’s Center for Healthcare Regulatory Insight.

The 222 life science and pharmaceutical deals year-to-date were well ahead of all other categories of the health-care industry. The 31 deals in August were a close second to the 32 medical device and supplies deals, Kocot said.

“Investor interest is expected to continue to be strong for the remainder of the year as we move closer to potential approval of a COVID-19 vaccine and more evidence emerges from clinical trials on potential therapeutics,” he said.

Medical device and services deals were at their highest volume for the sector this year, Kocot said.

“As hospitals continue to recover from the pandemic, demand for medical devices and services is increasing along with investor interest in innovative care delivery in new or alternative settings, which are contributing to transaction growth in the sector,” he said. 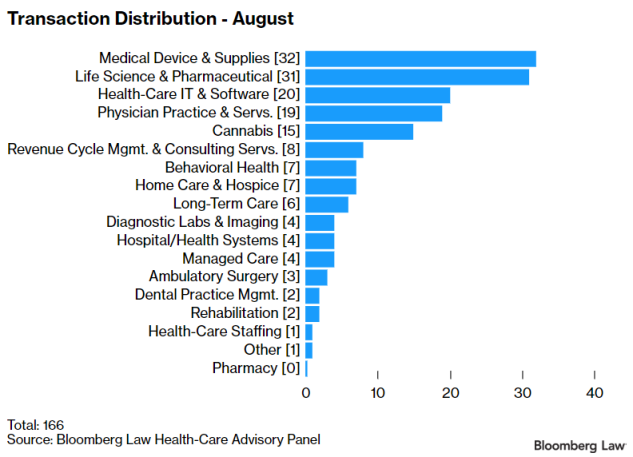 KPMG in Washington and FocalPoint Partners of Chicago prepared the curated year-to-date list and the list of select August transactions for Bloomberg Law.

Deals in the health information technology and software sector dipped to 20 in August. However, activity in this sector is still at one the highest levels in recent times, Anjana Patel, a member of Epstein Becker Green and its National Health Care and Life Sciences Steering Committee, said.

“Investors see big payoffs from the pandemic’s continued effect on these sectors’ ability to handle and innovate in light of the high volume usage of these platforms,” Patel said.

Activity in the cannabis sector this year continued to exceed expectations, Zachary Taylor, an associate in the health-care and life sciences practice of Epstein Becker Green, said.

“This growth is likely due to the widespread confidence that more and more states will be expanding medical marijuana, as well as recreational use, over the next several years,” he said. 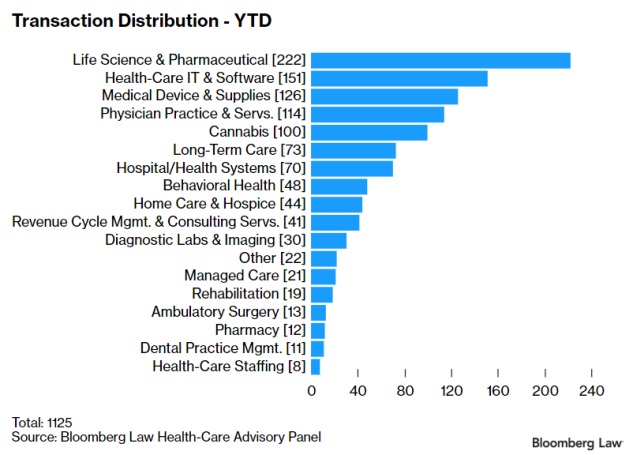 The physician services sector, with nearly 20 deals in August, had a significant increase from the six transactions in July, Gary Herschman, a member of Epstein Becker Green’s health-care and life sciences practice, said.

The sector “is demonstrating a strong rebound since the initial COVID shutdowns and restrictions,” Herschman said. Deals included six primary care groups and multiple deals in orthopedics, eye care, and dermatology, he said.

“We expect this robust level of deals in this sector to continue, or increase, in the remaining months of the year,” Herschman said.

Physician groups, “hit over their heads with the ‘Covid bat'—continue to seek to join larger, well-capitalized organizations with strong corporate infrastructure,” he said.

“Many companies are likely focused on ramping up internal operations and financial performance in light of the COVID-19 pandemic and the corresponding halt on elective surgeries,” Torres said.