Allergan had agreed to pay the St. Regis Mohawk Indian Tribe $15 million a year to take ownership of the patents and then sought to dismiss challenges filed by Mylan NV, Teva Pharmaceutical Industries Ltd., and Akorn Inc.
Scott Eisen/Bloomberg via Getty Images

Top executives from five pharmaceutical companies including and have given more than $370,000 combined to 2020 political campaigns. The contributions flowed largely to Republicans who pose a bulwark against drug price-control legislation that could hurt companies’ revenue.

Lawmakers heading into the 2020 elections face increasing pressure to pare back the costs consumers pay for drugs. On the table are proposals that would empower the federal government to demand lower prices for certain medicines. Another aims to overhaul Medicare to reduce what seniors pay. 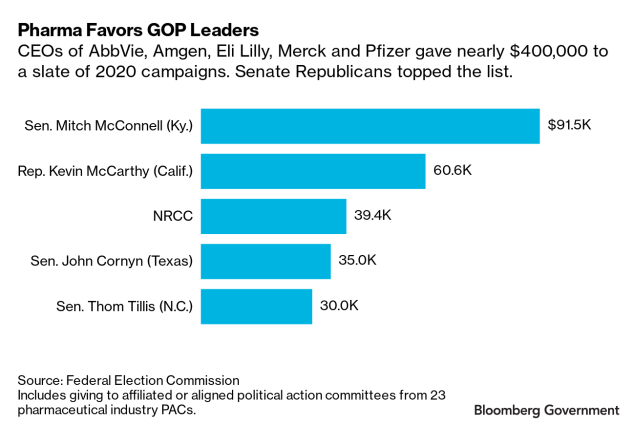 “From the perspective of industry, their best-case scenario is to put their money into places to prevent the structural changes that could cut into their bottom lines,” said Margarida Jorge, campaign director of Lower Drug Prices Now. “From that point of view it makes sense to put resources into people like McConnell.”

The five drug company executives, who collectively head the pharmaceutical firms that were the most politically active in 2019 as measured by PAC donations, gave almost exclusively to Republicans and political action committees that use their money to support Republicans running for office. The group included senior executives with , , and , as well as Pfizer and Amgen.

Behind McCarthy (R-Calif.) and McConnell in donations from pharmaceutical executives sits the National Republican Congressional Committee and a slate of Senate Republicans up for re-election in 2020.

Lawmakers on both sides of the aisle pushing for major changes for the pharmaceutical industry meant to lower what Americans pay at the pharmacy have said McConnell stands as a major barrier to clearing their legislation.

House Speaker (D-Calif.) similarly has said McConnell’s rejections of her Medicare negotiation bill (), which the White House also opposes, is keeping the legislation from becoming law.

There’s ever-increasing pressure on lawmakers to do something to make prescription drugs cheaper, Robert Blendon, a professor of health policy and political analysis at Harvard University’s School of Public Health, said. The pharmaceutical industry worries that response will include pricing controls like those in Pelosi’s negotiation legislation, which would peg the price tag for certain medicines to their prices in other countries and levy hefty fines on drug companies that refuse to reduce the cost of their products.

“If you’re the pharmaceutical industry and you’re worried about where this is going to take you, then you support the party that opposes price interventions,” Blendon said.

Executives Vs. Their Companies

David Ricks, chairman and chief executive officer for Eli Lilly, gave $159,160 of his own money this year to various campaigns, with $60,600 of that going to McCarthy-connected committees, according to FEC records.

Albert Bourla, the head of Pfizer, gave $60,783 to a list of committees affiliated with Senate Republicans, including McConnell and Sens. (R-Texas), (R-Colo.), and (R-N.C.). Robert Bradway, the CEO of Amgen, gave $67,308, similarly to committees connected to Cornyn, Gardner, McCarthy, and Tillis. Gardner and Tillis face tough re-election campaigns in 2020.

Sen. (Del.) was of the rare Democrats to get money from three of the five executives. He’s the ranking member on the Judiciary Subcommittee on Intellectual Property and worked with Tillis in 2019 on updating patent rules that affect the drug industry.

How these executives gave as individuals to campaigns mimicked how their company-affiliated political action committees gave last year, only with far fewer dollars for Democrats.

Political action committees connected to 21 major pharmaceutical companies operating in the U.S. and the industry’s two largest lobbying organizations gave $6.7 million total between January and December of 2019 to a long list of campaigns, according to FEC data. Topping that list were the election committees for both Democrats and Republicans, followed by Republican leaders and Coons.

A spokeswoman for Pfizer said the company “has no control over any colleagues’ personal contributions to any politician or elected official.”

“Pfizer supports candidates and elected officials from both political parties who work on policies that are important to patients and our industry,” Sharon Castillo, the spokeswoman, said.

A spokeswoman for Amgen said the company doesn’t comment on executive giving. Amgen’s affiliated PAC gives to candidates that “are generally supportive of policies to advance healthcare innovation and improve patient access to new and existing therapies.” the spokeswoman, Kelley Davenport, said.

“Lilly’s PAC supports candidates, on both sides of the aisle, who place value on protecting and promoting pharmaceutical innovation. We do not direct how employees contribute to political candidates,” Kelley Murphy, Eli Lilly’s senior director of corporate communications, said in an email.

Spokespersons for Merck and AbbVie didn’t return requests for comment.