Physician services was one of the top five active sectors for health-care transactions in February and is on pace to reach well over 300 deals in 2021.

The first two months of the year saw 71 deals involving more than a dozen physician specialties, including primary care (16), eye care (15), orthopedics (6), and gastroenterology (5). Twenty-five deals were announced or closed in February, up from 19 during the same month last year. There were 208 physician practices deals in 2020.

Consolidation of physician practices can be a concern to health insurers, employers, and consumers because it can lead to higher fees and health-care costs. But many independent physician practices have been strained by the sharp reduction in visits during the Covid-19 shutdown, putting more pressure on them to sell to hospital systems or merge with other physician groups.

“More physicians than ever are considering strategic transactions to become part of larger, well-capitalized organizations with extensive corporate infrastructure—all of which is becoming more crucial in positioning themselves to succeed in the uncertain future,” Gary Herschman, a member of Epstein Becker & Green PC’s health-care and life sciences practice in Newark, N.J., said.

The pandemic, increased competition, and many reimbursement changes underway in the industry all contribute to that uncertainty, he said. 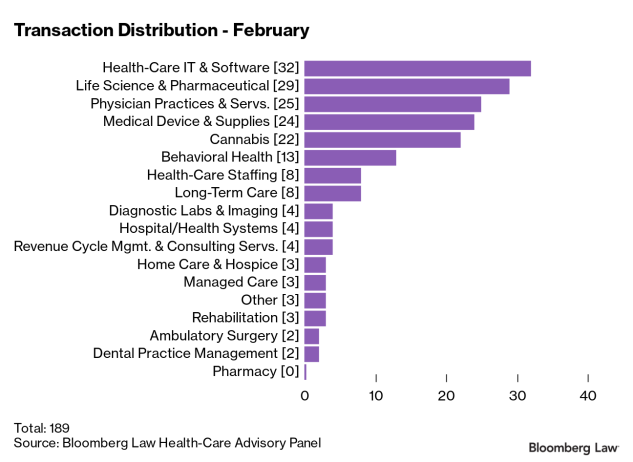 KPMG in Washington and FocalPoint Partners of Chicago prepared the curated year-to-date list and the list of select February transactions for Bloomberg Law.

Enactment of the American Rescue Plan Act, which is expected to boost the U.S. Covid-19 response, and the national vaccination effort—which is helping consumer confidence and economic recovery—are “likely to contribute to a continued favorable economic environment for growing health care investment,” Larry Kocot, principal and national leader of KPMG’s Center for Healthcare Regulatory Insight, said.

The two practices were combined to create Together Women’s Health, which will serve as the platform for expansion throughout the Midwest, he said. Shore plans to grow its women’s care provider network by acquiring more independent providers in the future, Torres said. 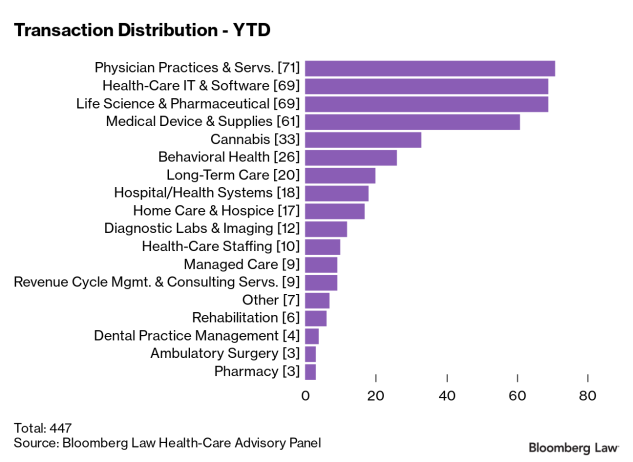 Health IT in Lead

Health information technology and software was the most active sector in February as “telehealth and other pandemic-driven demand continues to drive innovation that promises lucrative rates of returns for investors,” Anjana Patel of Epstein Becker & Green in Newark, said.

“Although COVID-19 case and death numbers have been trending downward over the past month, we anticipate that demand for virtual care and technologies to meet evolving patient demands will remain strong for the foreseeable future, creating a bright outlook for this sector,” Kocot said.

The life sciences and pharmaceuticals sector accounted for 29 deals in February and 69 in the first two months.

Additional clearances in the coming months from the Food and Drug Administration for Covid-19 vaccines and therapeutics, as well as increased drugmaker efforts to develop vaccines for other illnesses using mRNA technology, “are expected to be tailwinds for investment in the sector,” Kocot said.

Cannabis deals doubled from January to February, with a total of 33 deals so far early in 2021, “reflecting a trend of potentially close to 200 transactions this year,” Zachary Taylor of Epstein Becker & Green in Newark said. There were 159 cannabis transactions in 2020.

“Acceptance of cannabis, both medicinally and recreationally, is expanding throughout the country like wildfire,” he said.

And 24 deals in the medical device sector were announced or closed in February, with a total of 61 year-to-date. “Technology advances, a resumption of medical services, and the evolution of the healthcare experience are expected to continue to fuel growth in the sector,” Kocot said.