Physicians prescribing opioids can compare how often they hand out the pills relative to their peers in an effort to mine prescription data to fight the abuse of addictive painkillers.

In a $79 million contract with Centers for Medicare & Medicaid Services, a health care quality consultant group is developing reports giving medical professionals a picture of their opioid prescription stats in an effort to enlighten them about their own prescribing patterns.

Tennessee-based Qsource, which leads cross-state coalition atom Alliance, developed the dashboards last year using claims data from Medicare’s Part D drug program. The reports tell physicians and others where their prescription rates stand compared to their peers and federal guidelines. Now Qsource is distributing 33,000 reports, or “dashboards,” to doctors and other prescribers in the five southern and midwestern states it covers.

Improving the practice of prescribing opioids is one of the Centers for Disease Control and Prevention’s main targets in its opioid crisis response. The reports could be the next step to advance that mission.

“We wanted to create another tool in the tool box related to supporting physicians and other prescribers in their prescribing of opioids,” Amanda Ryan, a clinical pharmacy specialist for Qsource who works on the contract, said in an interview.

Qsource is one of three organizations that make up atom Alliance, a designated CMS Quality Innovation Network-Quality Improvement Organization, or QIN-QIO, that serves Indiana, Kentucky, Tennessee, Mississippi, and Alabama.

The QIN-QIO program is designed to improve health care quality at a state and community level, which includes addressing opioids. atom Alliance is just one of 14 groups in the program using prescriber-specific reports that include Medicare drug program claims data to improve drug safety and prevent overdoes, a CMS spokesman said in an email.

“It’s an area where the more quantitative information we can bring to the table, the better off providers are,” Maestas said.

It’s not intended to be a standalone intervention for prescribers, Ryan said, but “it’s one way to give a quick summary and show them some information that they may not already have.”

Currently, the stats are calculated using Medicare drug claims, which CMS has used to make its own prescribing rate mapping tool. The individual prescriber data for 2013-2016 is also publicly available.

Though the data are limited, they give an “important snapshot” of a population adversely impacted by opioid issues, Ryan said. What’s more, if prescribers change their prescription practices as a result of the dashboard information, that would impact the patients they serve outside the Medicare program too, she said.

The atom Alliance has plans to develop a website to deliver the dashboards, but for now it is distributing paper copies the of the thousands of reports to prescribers in the states it serves.

Prescribers who have received the reports so far told atom Alliance they appreciate the information but are interested in seeing more comprehensive data outside Medicare.

“The biggest challenge our state has had is making prescribers aware of the data,” he said.

Although, most states have their own databases comparing physician’s prescribing patterns, not everyone uses that information, Rett Blake, a pain management specialist in Chattanooga, Tenn., told Bloomberg Law. Blake said he regularly looks up his numbers on Tennessee’s system, but not all prescribers make that part of their routine.

Help in the Heartland

The reports could be beneficial in areas hit hard by the opioids crisis. Generally, the states that atom Alliance covers don’t have the best prescribing patterns, Ryan said.

Data provided to Bloomberg Law by atom Alliance show that the amount of opioids prescribed per Medicare beneficiary who has at least one opioid prescription was almost twice the national average reported by the CDC for 2017. 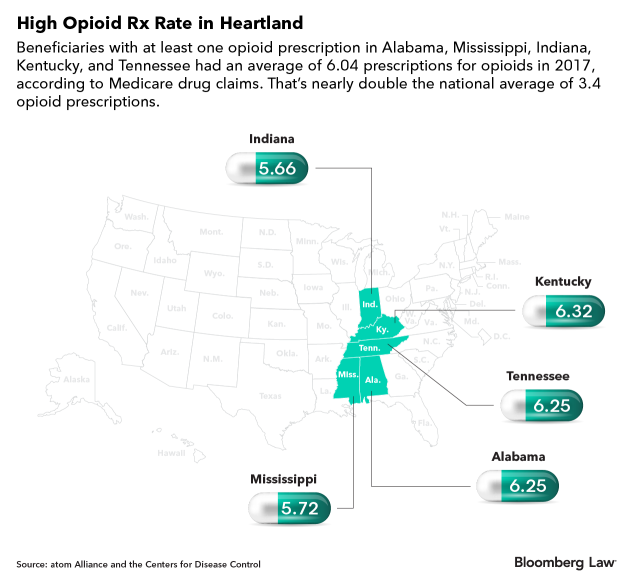 Bart Prevallet, atom Alliance’s state director for Alabama, said his group has been approached by other QIN-QIOs interested in the concept of the dashboards, so there’s potential to expand to other states.

Opioids prescriptions per capita increased by 7.3 percent between 2007 and 2012, the according to the CDC, one of many factors that lead to the current crisis.

In response, the CDC in 2016 produced prescribing guidelines to give medical professionals signing the prescriptions an idea of when they should and shouldn’t be prescribing the powerful medications.

“Rates of opioid prescribing vary greatly across states in ways that cannot be explained by the underlying health status of the population, highlighting the lack of consensus among clinicians on how to use opioid pain medication,” the CDC said in its 2016 guidance.

Before the CDC guidelines, prescribers relied on their educational backgrounds and conventional wisdom to fill out prescriptions, Maestas said. That allowed heavy influenced by drug companies that said the products were safe and non-addictive, she said.

“There wasn’t the other side of it until the epidemic really became so big that it just couldn’t be ignored anymore,” Maestas said.

Maestas, an economist, was the senior investigator on a 2018 study that found a significant portion of physicians don’t give any reasons backing up their opioid prescriptions. About 29 percent of opioid prescriptions the Harvard Medical School and the RAND Corp. researchers analyzed didn’t include pain diagnoses to justify using the medication.

Giving prescribers a sense of the their relationship to the CDC guidelines, especially with measurements like duration of the prescription, could be helpful in preventing addiction, Maestas said.

The one caution she had about the dashboards was that comparing between specialties might not be the best approach. Certain specialties might get more patients with chronic pain than others, for example, so adjusting for risk within each patient population is important in giving a more accurate picture of their prescribing habits.

A CMS spokesman said atom Alliance and the other quality improvement contractors “will continue to work with providers and share innovative reports and solutions” until the contracts end this summer. CMS couldn’t comment on whether it would be renewed.