Radiation oncologists are crafting their own version of an embattled Medicare payment model whose launch date, much like the Artemis spacecraft, has been delayed several times.

The American Society for Radiation Oncology hopes its effort will accomplish what years of lobbying has failed to do: convince the federal government that higher Medicare reimbursements could fund additional services to help disadvantaged beneficiaries complete their cancer treatments.

The project reflects the society’s frustration with the radiation oncology model from the Centers for Medicare & Medicaid Services. After being delayed twice by Congress, the model’s January 2023 start date was postponed again in August pending future rulemaking as the CMS considers “whether a January 1, 2024, start date or an alternative start date would be feasible,” the final rule said.

Designed by the agency’s Center for Medicare and Medicaid Innovation, the mandatory model would bundle payments for radiation therapy provided in different settings. By paying the same rates over a 90-day care episode—regardless of the treatment site—the model removes incentives to provide therapy in higher-cost settings. It’s expected to save $150 million over five years.

ASTRO, which represents nearly 10,000 cancer care specialists, has called for changes to the model since it was introduced in 2019, saying it focuses too heavily on savings rather than quality of care.

“Worse, by creating disproportionate risk for providers who care for people from socioeconomically disadvantaged communities, the model would jeopardize these patients’ access to high-quality care and exacerbate health disparities,” Laura A. Dawson, chair of the ASTRO board of directors, said in a recent statement.

The concerns—echoed by a coalition of African American, Asian-Pacific American, Hispanic, and Native American House members—are a bitter pill for the Biden administration, which has made health equity and eliminating disparities for underserved populations a major focus of all its health policy decisions.

The lawmakers want the model to include a component of ASTRO’s Health Equity Achievement in Radiation Therapy (HEART) proposal, which calls for additional Medicare funding for radiation oncologists to provide “wraparound” services—like transportation, child care, and assistance navigating the health-care system—for patients at risk of not completing their daily radiation treatments.

The HEART care and funding proposal was developed by ASTRO after researchers found that found minorities are one-third less likely than White patients to begin their radiation therapy, due mainly to a lack of transportation and other social supports. 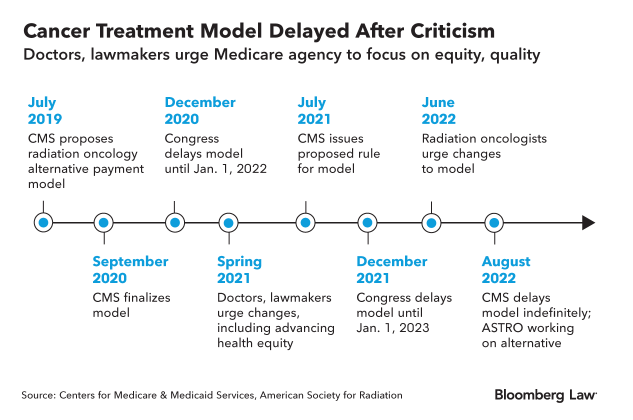 One of those researchers, Constantine Mantz, ASTRO’s chairperson for health policy and a practicing radiation oncologist in Florida, also said rural communities typically lack the technology in their facilities to provide the highest levels of radiation therapy.

The HEART proposal dovetails with a 2021 study by researchers in North Carolina that showed addressing barriers to therapy completion helped reduce disparities in survival rates for Black and White patients with lung and breast cancer.

And the HEART proposal has precedent, ASTRO said: The discontinued Medicare oncology care model allowed providers to submit claims for enhanced services, like managing and coordinating care and providing financial help and emotional support for beneficiaries. This helped form the template for the HEART proposal, said David Adler, ASTRO’s vice president for advocacy.

Supporters say the HEART proposal is consistent with President Joe Biden’s “Cancer Moonshot” goal of cutting the cancer death rate in half in 25 years, and the CMS goal of eliminating health disparities among underserved populations.

“It seems impossible to imagine that under the RO model, with reduced payments, that we would be any more likely to meet these challenges and to close these gaps,” Mantz said. “In fact, what we imagine instead is that the gaps will continue to widen over time under the model.”

But the administration has resisted adding the elements of the HEART proposal to the model, Adler said.

“We’ve been proposing this to CMS as part of the RO model for a while. It was disappointing that they didn’t integrate any of it into the model,” Adler said.

While the CMS’s final rule in August said future rulemaking for the model “may also involve modifications to the model design,” ASTRO continues to work on its own payment model with an outside consultant and physicians from different radiation oncology practice settings, Adler said.

The group will also seek input from the larger radiation oncology community and patient advocates before talking with policymakers later this year, he said.

In a statement, the CMS said it’s committed to health equity as an integral part of CMMI’s mission to improve health-care quality.

And in its August final rule, the agency said it “may further consider” concerns about disparities, equity, and impacts on rural practices “as we evaluate how best to proceed with the RO Model going forward.”

However, in a related final rule from November 2021, the agency said “we have no data or evidence to suggest” that the RO model will exacerbate health disparities. Furthermore, “at the beneficiary-level, we believe the RO Model has the potential to minimize health disparities in care,” the rule said.

“The potential for fewer treatments under the episode-based payment approach may lead to reduced side effects from treatment, reduced travel time required for treatment, less time spent in a doctor’s office or waiting room, and more free time to engage in other activities that can help improve their overall quality of life,” the rule said.

Additionally, the CMS said the model provides other opportunities to minimize health disparities.

These include allowing participants to “work collaboratively on performance improvement” through “shared communication platforms and educational webinars” in which they can learn from peers and share best practices. Quarterly feedback reports can also help participants understand care delivery patterns, compare data and “identify opportunities for quality improvement,” the rule said.

The model advances the agency’s push toward value-based care in which “CMS initiatives pay for value and outcomes, rather than for volume of services alone, by promoting the alignment of financial and other incentives for health care providers caring for beneficiaries receiving treatment for cancer,” the CMS said in August.

Payments for physician group practices and radiation therapy centers would increase 6.3% over five years under the model, the CMS estimates. But reimbursements for treatment in hospital outpatient departments would fall 9.9%. The model also imposes “discount factor” payment reductions of 3.5% for technical services, like equipment and supplies, and 4.5% for professional physician services, like interpreting diagnostic tests and performing procedures.

These discounts are typically offset through financial incentives for participating in alternative payment models, but the RO model provides no such incentives, Mantz said.

“That’s a big problem for radiation oncology,” he said. “The equipment that we need to purchase and operate to provide these services is among the most expensive equipment in all of medicine. And to have to absorb such steep discounts to prevailing payments puts many facilities, hospitals and freestanding facilities, at risk for their viability.”

Oncologists have called for the 3.5% and 4.5% discounts to be reduced. But after already cutting them from 3.75% and 4.75%, the CMS says they can’t be lowered again without changing other aspects of the model, like increasing its size.

“If the RO Model’s scope were to increase at some point in the future via rulemaking, we could explore lowering the discount,” the August final rule said.