Nearly a half million people signed up for Obamacare after losing health-care coverage from their employer, the Department of Health and Human Services said Thursday.

The 487,000 consumers who got coverage from the federal HealthCare.gov exchanges marks an increase of 46% from the same time period last year, the HHS said in a report.

The increased enrollment through May came as millions of people became unemployed and lost job-related coverage due to the Covid-19 pandemic. The increase in sign-ups outside of the normal open enrollment period was higher than during any other year, the HHS said.

The Trump administration has refused to reopen HealthCare.gov to let uninsured people get coverage. It instead has argued that under the Affordable Care Act, people who lose health-care coverage due to job loss can enroll during a special enrollment period. People can sign up for coverage outside of normal open enrollment if they have a life-changing event, such as the birth of a child, marriage, divorce, or job loss.

“As a result of the economic disruption that followed COVID-19 outbreaks, many consumers experienced life changes—particularly related to employment—that allowed them to enroll in health coverage through the Exchange,” the HHS said in a statement. “Enrollment data for April and May of this year show that thousands of Americans who lost job-based coverage due to COVID-19 are successfully taking advantage of existing SEPs to enroll in coverage.”

Democrats and the health insurance industry maintain that reopening HealthCare.gov is vital to getting as many people covered as possible during the health-care emergency.

The HHS doesn’t normally release special enrollment data, and it has declined to do so when queried in prior months by Bloomberg Law. 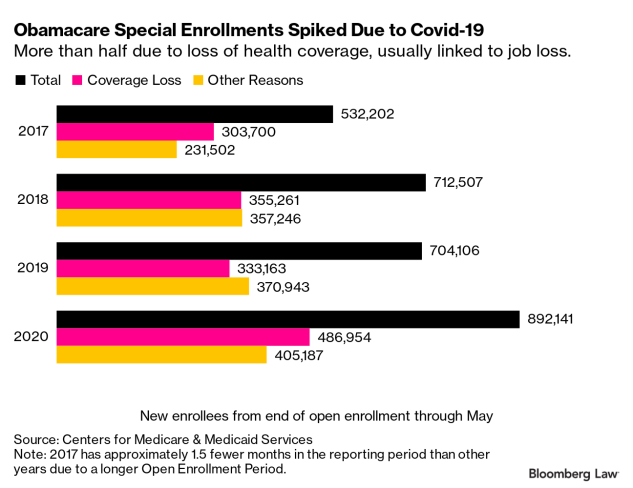 The largest monthly gain was in April, when enrollment increased 139% compared to April 2019, the HHS said.

Bureau of Labor Statistics data show that non-farm employment dropped by 20.7 million from March to April, as states issued stay-at-home orders to prevent the virus from spreading, according to the report. The unemployment rate hit a high of 14.7% in April.

It’s unclear how many people will ultimately look to the Obamacare exchanges to replace job-based coverage due to a number of factors, including expectations that people will return to work within six months and employers continuing to provide coverage to laid-off and furloughed employees, according to the report.

In total, 892,141 people have signed up for special enrollment coverage in the states that use HealthCare.gov.

About 8.3 million people enrolled in plans using the HealthCare.gov platform during the normal 2020 open enrollment period that ended in December 2019.

As of Nov. 1, 2019, 13 states have been operating their own exchanges, and all of them except Idaho have reopened their exchanges to let more people get enrolled.