Deal volume in the health-care industry dropped slightly in November, marking the first time in the past five months when there were fewer than 150 announced or closed transactions, investment bankers and attorneys told Bloomberg law.

The health-care information technology, long-term care, and physician practice and services sectors all fell in volume, but deals in these sectors remain on pace to exceed 2018’s numbers, S. Lawrence Kocot, a principal at KPMG LLP in Washington told Bloomberg Law.

Overall, the numbers are still strong. There were 1,400 deals through the end of November—a nearly 40% increase in deal volume from this point last year, ECG principal Hector M. Torres said. 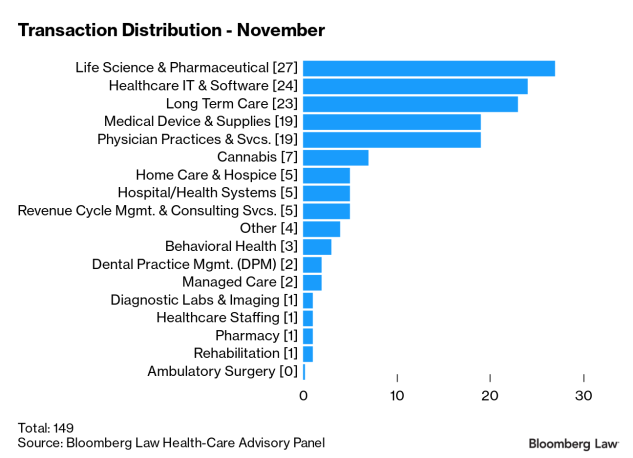 The life sciences and pharmaceuticals sector had the most transactions in November, Kocot said. 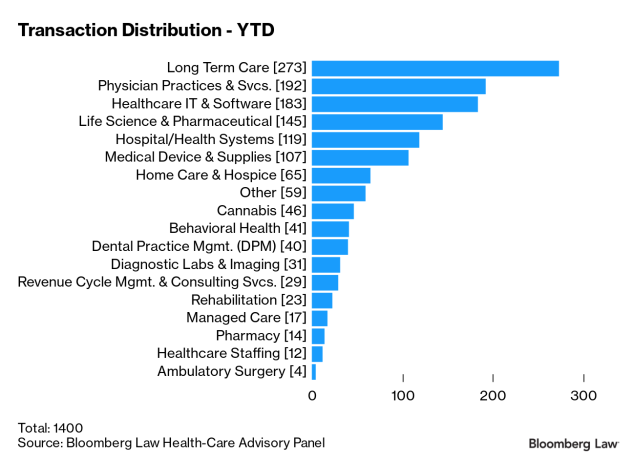 Steady Pace for Health IT

Health IT continued on its steady pace, ECG senior manager Aaron T. Newman told Bloomberg Law. The yearly deal volume is now over 180, compared with 127 transactions through November 2018, he said.

There were 23 long-term-care sector deals announced or closed in November, ECG’s Christopher McGuine told Bloomberg Law. The 273 year-to-date total is up about 36% from last year, he said.

The hospital and health system sector is well short of where it was at this time last year, Kocot said. Only 119 hospital transactions have taken place in 2019 so far, compared with 165 as of November 2018.

And there were just five deals in November, Nicholas B. Davis of ECG said. Those deals included the University of Louisville’s acquisition of KentuckyOne Health’s Louisville holdings, which include Jewish Hospital, St. Mary Hospital, St. Elizabeth Hospital, and certain CommonSpirit Health assets, he said.

“It’s clearer than ever that the key to future survival and success of hospitals and physicians (and other healthcare providers) is robust implementation of virtual health, data analytics, advanced EMR and patient access—which only large organizations with substantial capital can invest in,” Herschman said.

Despite the slight downturn in November, Herschman predicted that “even more consolidation among providers is coming in 2020.”
_________

Epstein, Becker & Green PC and KPMG LLP didn’t comment on any particular transaction or party discussed or listed in this article.