A monkeypox clinical trial at the NIH will evaluate the US approach to increasing vaccine supply with smaller, more superficially administered doses, answering critical questions as cases climb.

The clinical trial will likely begin within the next month as the National Institute of Allergy and Infectious Diseases is in the late planning stages, Emily Erbelding, director of NIAID’s microbiology and infectious diseases division, said during a webinar hosted by the National Academy of Medicine and the American Public Health Association.

It’s one of several studies the National Institutes of Health is either undertaking or considering as cases have grown to more than 14,000 in the US and more than 40,000 globally, according to data from the Centers for Disease Control and Prevention.

Bavarian Nordic A/S’s vaccine Jynneos and Siga Technologies antiviral Tpoxx were available ahead of the outbreak, but their approval largely stemmed from animal studies because it’s unethical to conduct clinical trials without naturally occurring disease.

The NIAID studies “are currently being designed to address some of those major gaps,” in knowledge, Erbelding said Thursday.

The forthcoming study will follow the Department of Health and Human Services’s recent announcement clearing the way for the Food and Drug Administration to allow the new dosing strategy. The White House is focused on ramping up the intradermal shots in places such as Los Angeles and Fulton County, Ga., counties, White House monkeypox response coordinator Bob Fenton said Thursday.

Intradermal dosing involves injecting the shot just underneath the skin, instead of the approved subcutaneous method, where the shot goes in deeper. The strategy will allow for as much as five times as many doses than what the US could supply with subcutaneous injections.

“The thinking behind why we get similar immune responses between one-fifth of the dose compared to the subcutaneous full dose of the vaccine is that the superficial layers of the skin are packed with immune cells that help amplify the response, leading to comparable antibody responses by either route of administration,” Boghuma Kabisen Titanji, a physician and infectious disease at Emory University, said during the same webinar as Erbelding.

“Given the limited supply of vaccination, exploring alternative modes of administration that can build sparing is essential to really broaden the availability of these vaccines to individuals that need them.” 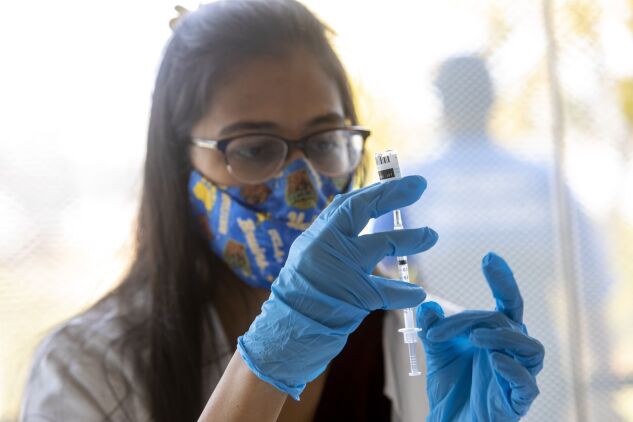 There are still many scientific questions about the vaccine, Titanji said, including a better understanding of “any differences in terms of efficacy and effectiveness depending on the route by which these vaccines are administered.”

Data from a 2015 study indicate the new administration route is safe without compromising the impact on the immune system, but the NIH study will offer clear evidence about whether changing the dosage has any clinical impact on the vaccine. But even in that one study, a substantial number of people had significant local reactions, Nicole Lurie, executive director of preparedness and response for the Coalition for Epidemic Preparedness Innovations, said in an interview.

Lurie, who served as the HHS assistant secretary for preparedness and response during the Obama administration, said she supports running clinical trials and collecting real-world evidence but there needs to be a systematic way of tracking who receives intradermal shots and what happens to them.

The second is the new authorized intradermal dosing, also two shots administered four weeks apart. Then researchers will study a single dose of an intradermal shot. Those living with HIV can participate in this trial.

“This trial is going to add to the data package that could support licensure of intradermal delivery. And it can also provide data on the durability of the immune response to the single intradermal dose,” Erbelding said.

The NIAID also plans to expand existing trials to generate data for the vaccine in pediatric age groups as well as pregnant and breastfeeding individuals, Erbelding said, which she said could happen in the next month.

The agency also is supporting global studies of Tpoxx (tecovirimat) to evaluate the efficacy and safety when used to treat clinical illness. She said some of the trials in Africa were underway before the current outbreak.

A future study may also test a combination therapy particularly for individuals who are heavily symptomatic or who might progress on tecovirimat alone. Erbelding didn’t say what the other medicine might be, and the NIAID hasn’t done any formal planning yet.

It’s also important to know how to use antivirals and vaccines for post-exposure prophylaxis, she said.

“In order to get proof of efficacy and the exact interval where those post-exposure prophylaxis might provide benefit, we would have to conduct randomized control studies, randomized trials and not necessarily rely upon records from real world effectiveness studies.”

“We realize that we need more tools in our toolbox and we need to continue to identify new antivirals that might be promising clinically, preferably with mechanisms of action that are different than the antivirals that we currently have available,” she said.