Plastic surgeon Ali Al-Attar has been shorted by insurers before, but when Anthem Blue Cross Blue Shield refused to pay him more than $2,300 for a cancer patient’s breast reconstruction surgery that cost over $24,000, he took his grievance to court.

“It was egregious,” said Al-Attar, one of nine surgeons with the Alexandria, Va.-based Affiliates in Plastic Surgery LLC. The average out-of-network cost to reconstruct a breast with muscle flap in the Washington region is $22,093, according to Fair Health, a nonprofit that providers consumers with information about health care costs.

Al-Attar’s case, which settled for an undisclosed amount Nov. 7, is one of several lawsuits filed in recent months against insurers for allegedly leaving plastic surgeons holding the bag on a big bill they have to absorb or pass on to patients.

A Bloomberg Law analysis found seven cases filed in federal courts since May against Blue Cross Blue Shield subsidiaries, Aetna, and UnitedHealthcare that allege the insurance companies violated the Employee Retirement Income Security Act by not fully reimbursing post-mastectomy breast reconstruction surgery despite a federal law that requires them to do so. Under the Women’s Health and Cancer Rights Act of 1998, group health plans and individual health insurance policies must cover breast reconstruction surgery after breast cancer treatment.

Physicians and attorneys say these cases challenging reimbursements are rare, that insurers usually settle payment disputes before they reach litigation stage. Al-Attar said he has anywhere from 10 to 20 cases a year settle before a lawsuit is filed.

“What I think they are doing is illegal and when you call them on it they generally pay up right away,” said Al-Attar’s attorney, Rebecca Gray of Clarian PLLC.

“They are trying to backdoor deny these reconstruction services the law requires them to cover,” she said. 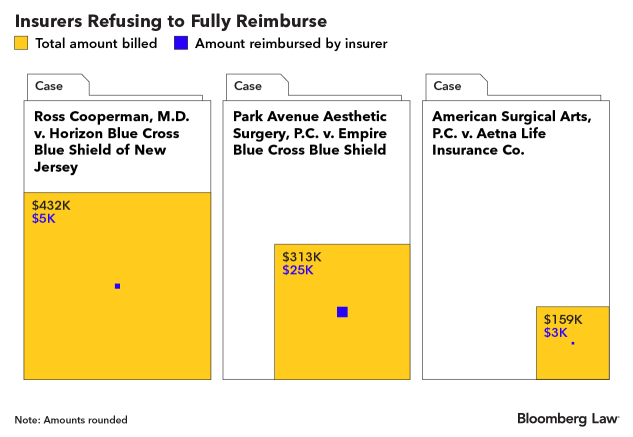 Attorneys say these disputes between plastic surgeons and insurers are part of a larger trend, as insurers routinely find ways to lower and reduce reimbursements.

“I think the likely result is that the plastic surgeon is taking a hit much like a hundred other providers are taking a hit and have watched their payments go down over the years at the mercy of insurance companies, who have a much stronger bargaining power,” said Michael Gottlieb, a New York-based health-care attorney, who represented a plastic surgeon in three cases against United Healthcare Insurance Co. that recently settled for undisclosed amounts.

While the plastic surgeons in the cases pending were out-of-network, they all say they were granted network exceptions to perform the surgeries but were reimbursed at rates that are a fraction of the bills they submitted.

In a case against Empire Blue Cross Blue Shield, Park Avenue Aesthetic Surgery PC billed the insurance company $312,927 but alleges it was only reimbursed $24,934.70.

The insurance company will then issue an explanation of benefits that indicates that the patient’s liability is $0, Gottlieb said, an attorney with Schwartz Sladkus Reich Greenberg Atlas LLP.

Sometimes the insurer will say in the reimbursement “please don’t balance bill the patient.” But if the remainder of the bill is neither the patient nor the insurance company’s responsibility, “then what happens to it?” he asked.

“They’re not Houdini,” Gottlieb said. “They don’t get to take a $50,000 charge and have it disappear. The doctor is a regular merchant and entitled to charge what he charges.”

The Women’s Health and Cancer Rights Act was enacted in 1998 not only because of horror stories of “drive-through mastectomies” where women were forced into four-hour outpatient mastectomy surgeries by their insurance companies to save money, but because of denials of coverage for breast reconstructions on the basis that such reconstructions were cosmetic, according to one complaint now pending.

The law allows insurers to negotiate the level and type of reimbursement with the provider, but the cases filed this year allege no negotiations took place.

Under ERISA, the law that governs health plans, insurers have an obligation to pay benefits to plan participants and beneficiaries in accordance with the terms of the plan.

Before this recent wave of litigation, the last case brought against an insurer for failing to fully reimburse a post-mastectomy breast reconstruction was in 2016 against Amalgamated National Health Fund, and it was voluntarily dismissed. A proposed class action against Aetna Life Insurance Co. for allegedly refusing to pay anything for the surgery in 2012 was also voluntarily dismissed.

The last major litigation against insurers for their alleged failure to fully reimburse breast reconstruction surgery claims was in 2011 when more than 90 Blue Cross Blue Shield Affiliates were sued for in the U.S. District Court for the Eastern District of Louisiana.

In a final judgment in March 2017, the court dismissed all the claims against the insurers. The health-care providers that brought the lawsuit appealed the decision to the U.S. Court of Appeals for the Fifth Circuit, but the parties reached a compromise out of court and the case was voluntarily dismissed.

It’s unclear what has caused the recent uptick in lawsuits. Al-Attar said it could be a sign of insurers being more willing to fight claims in court.

“They probably made an internal decision to switch what they’re doing,” he said.

But one law professor said the litigation may signal that providers are just trying to charge insurers too much.

“It could just be that here the discrepancies are large enough and the bill prices are out of scope enough that they’re willing to choose litigation over payment.” Allison Hoffman, a professor and health law expert at the University of Pennsylvania Carey Law School, said about the insurers.

Though the Women’s Health and Cancer Rights Act requires doctors to be reimbursed, Hoffman said it doesn’t say at what price.

“It doesn’t say they have to pay you $450,000 for breast reconstruction surgery that should cost $10,000,” she said. “It’s absurd they expect to be reimbursed at those levels.”

In health care, Hoffman said, a doctor’s billed price is hardly ever the same as the amount reimbursed by the insurer.

New York City-based attorney Robert Axelrod is representing plastic surgeons in three cases against insurers and may have more coming. In the most recent case, New Jersey plastic surgeon Ross Cooperman alleges on behalf of his patient that Horizon Blue Cross Blue Shield of New Jersey only paid him $5,500 for a two-stage breast reconstruction surgery that cost $431,592.

Under the Women’s Health and Cancer Rights Act, Axelrod said, insurance companies must cover breast reconstruction after a mastectomy, but “as only the insurance company will do, they parse the word ‘coverage.’”

A decision to cover breast reconstruction, because it is a federal mandate, but assess the patient almost half a million dollars in out-of-pocket costs is not a coverage decision, Axelrod said in one complaint.

“In such a scenario, BCBSTX issues the policy covering the individual and determines the amount paid to the out-of-network provider,” the insurer said. “Horizon merely serves as an intermediary that transmits the claims and processes the payments at the direction of BCBSTX.”

But the complaint says Horizon is the claims administrator of the patient’s plan through Fidelis Companies LLC.

Horizon said detecting, preventing, and treating breast cancer is one of the company’s highest priorities and said the company has been recognized in the fight against breast cancer by organizations like Susan G. Komen.

“Horizon BCBSNJ is proud to work closely with its oncology provider partners to improve the way care is delivered to breast cancer patients, pioneer and advance payment models that recognize and reward physicians who achieve better clinical outcomes, and collaborate with research partners to advance the science of preventing and curing breast cancer,” the statement said.

America’s Health Insurance Plans, a trade association of health insurance companies, did not respond to a question about the growing tension between insurers and providers over payment rates. The group told Bloomberg Law it could not comment on pending litigation when asked about the recent wave of litigation over reimbursements for breast reconstruction surgery.