In many ways, Tanya Fields’s attempt to get testing for Covid-19 is the by-now-familiar American tale of an ill-equipped health-care system. But to her, it’s more like a black American tale.

In March, the 39-year-old began experiencing classic symptoms of the virus, including a fever, body aches, no sense of smell, and shortness of breath. Fields, who lives in the Bronx, in the lowest-income congressional district in the country, decided not to go to the local hospitals she figured would be overwhelmed with patients. She traveled instead to the academic Montefiore Medical Center, waiting for hours in the cold before the facility sent her home without a test.

A week later, a city hotline got her an appointment at a drive-through testing site in the Bronx. Fields said she’s lucky she has a car, something many of her neighbors lack, but nevertheless it was “scary to go get tested,” because of the heavy police and military presence. A member of the National Reserve yelled at her while she waited, she said. Two days later, more than two weeks after she started feeling sick, her results came back positive for Covid-19.

People of color, like Fields, face barriers to testing that others don’t, and what data exist on racial testing disparities point to less access in black and Latino neighborhoods. Illinois, one of few states to release demographic information on testing, found white people got almost twice as many tests as black people. Both groups make up around the same share of confirmed cases. In New York City, whiter and wealthier neighborhoods have had more per capita testing, an analysis by the New York Post found.

Given the disparities, there’s a growing consensus that getting testing to minorities will be an important part of getting America back to work. Many people of color work in essential jobs, putting them at risk of contracting and spreading the virus. In New York City, over 50% of public transit and grocery, convenience, and drug store workers are black or Hispanic. 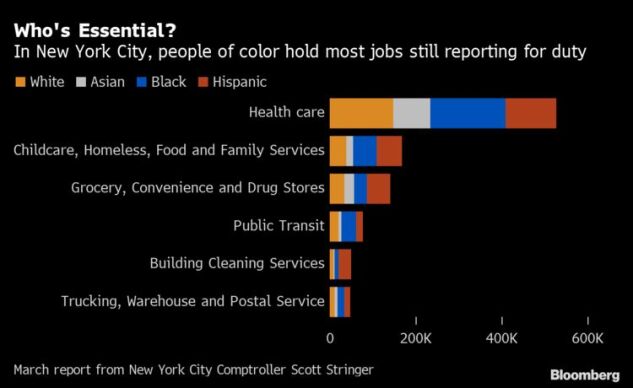 Those groups have also made up a number of cases and deaths in the state, as well in other cities and states. Guidelines for states issued by the White House last week call for more screening for the at-risk, including lower-income Americans, racial minorities and American Indians, saying it’s a core responsibility for state preparedness. 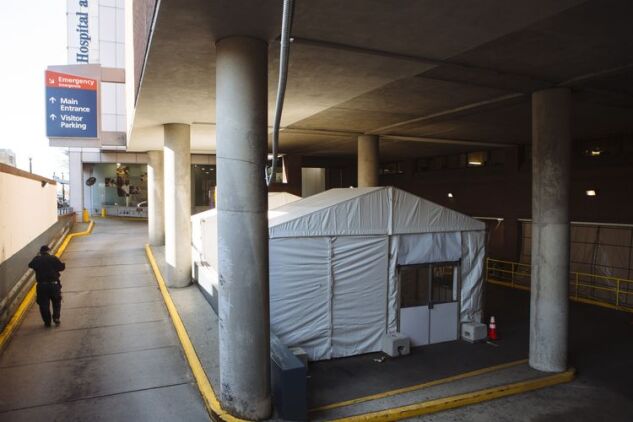 Tents outside the emergency room of Montefiore Medical Center in the Bronx, New York on March 26.
Photographer: Angus Mordant/Bloomberg

Some cities and states have introduced more testing in black and Latino neighborhoods. Detroit opened a new site for essential workers, including those who don’t have a prescription from a doctor or even have symptoms. New Orleans will begin offering walk-up testing in the city’s hot spots, which include many predominantly black areas. And on Monday New York City opened a similar clinic in Washington Heights, where there’s a hard-hit Latino community.

Wayne Frederick, a surgeon and the president of Howard University, worries that won’t be enough. “While testing is a nationwide issue and we haven’t been doing a great job of it, it is even worse in these underserved communities,” he said. “Unfortunately, we think of them the least. We don’t try to build a different model for them. We do what’s easiest.”

Black and Hispanic Americans are less likely to have insurance and a primary care provider than white Americans, according to a recent report from the nonprofit Kaiser Family Foundation. Because of those factors, they may not know where to seek testing or avoid doing so fearing high out-of-pocket costs.

People of color also face bias from health-care providers even when they can access services. One survey of health insurance data from seven states by medical research firm Rubix found that doctors were less likely to refer African American and Hispanic patients for testing when they showed up with symptoms. A group of University of California Berkeley researchers determined that bias in an algorithm used by hospitals to guide health decisions reduces the number of black patients identified for extra care by half.

Testing sites that have a heavy police presence may also deter patients from minority backgrounds who fear law enforcement, Frederick said. And contact tracing, which involves asking those who have tested positive for Covid-19 who they have been in touch with in the previous two weeks, “can be seen as an intrusion,” he added. In addition, testing won’t do much if those who test positive can’t take a day off without losing income or don’t have a place to self-isolate.

Howard University is looking to convert a mobile van it uses for prostate and mammogram screenings for testing in Washington D.C.’s majority African American neighborhoods, Frederick said. It’s also looking to form a coalition with experts across its different departments, community leaders and health department officials to look at how to best bring testing “to a community that may be suspicious of it.”

Minorities aren’t the only priority, said Consuelo Wilkins, vice president for health equity at Vanderbilt University Medical Centers. “You’re more likely to be black or brown and have to go into work right now,” she said. “But you should be prioritized because you have to go to work, not because you’re black or brown.”

To effectively open the economy, the testing ramp-up will have to reach people of all races or ethnicities. Experts the U.S. will have to run at least 500,000 tests daily by May 1 to start to get people back to work. That’s more than three times what the country is doing now.