A surgeon talks to a transgender patient before surgery.
David Paul Morris/Bloomberg via Getty Images

Lack of guidance from the Medicare agency to doctors on how to bill for gender reassignment surgery has created access barriers for transgender beneficiaries who want to undergo the procedure.

It has been four years since Medicare started covering such services on a case-by-case basis, but doctors are still unsure of how to bill for these surgeries, and they run a risk of not being paid or having the cost burden placed on patients. Medicare doesn’t approve payment for the surgery until it has been performed.

Although the coverage of gender reassignment services was applauded by activists and surgeons who perform gender reassignment, the number of Medicare beneficiaries who have had these surgeries is limited. This is partially due to the small number of transgender Medicare beneficiaries, as well as procedural roadblocks stemming from the lack of a national coverage determination.

It “feels to most people like a dramatic change to even make these services available on a case-by-case basis,” Green said, but “it’s not an open ticket.”

The Department of Health and Human Services banned all Medicare consideration of transgender health care in 1981. The ban was lifted in 2014. A request for a national coverage determination was made, but none was given.

The lack of a national coverage determination has led to uncertainty that has “limited where people with Medicare can go,” Dan Karasic, a psychiatry professor at the University of California, San Francisco, who works with transgender patients, told Bloomberg Law.

Medicare has not given guidance for the billing codes providers need to use for gender reassignment surgeries, which leaves it to providers to identify which codes Medicare might approve, Joshua Safer, executive director of the New York City-based Mount Sinai Center for Transgender Medicine and Surgery, told Bloomberg Law.

“There can actually be variance within Medicare in certain areas” of the country because of regional Medicare coverage decisions, Devin O’Brien Coon, medical director for the Johns Hopkins Center for Transgender Health, told Bloomberg Law. In Baltimore, he said there aren’t any guidelines.

Some regions use the World Professional Association for Transgender Health’s standards of care for approving gender reassignment surgery and most surgeons say they use those guidelines, even if the Centers for Medicare & Medicaid Services doesn’t tell them to do so. The WPATH standards of care for performing genital reconstruction require two doctor referrals and 12 months of living in their gender role (and hormone therapy in some cases), among other prerequisites. The standards are slightly less restrictive for chest surgery and removal of reproductive organs.

Having a contact person at an insurance company who is “savvy” at processing these kinds of claims can be helpful in moving through the process without problems, Alex Keuroghlian, director of the National LGBT Health Education Center at the Boston-based Fenway Institute, told Bloomberg Law. Keuroghlian is also a psychiatrist at Massachusetts General Hospital.

Keuroghlian said the Fenway Institute had to work with health-care companies to understand how to do the billing and get approval for the surgeries because of the lack of precedent for covering these services.

Medicare not guaranteeing payment can be a problem for patients on Medicare because of the high costs of the surgery, Maurice Garcia, director of the Transgender Surgery and Health Program at Los Angeles-based Cedars-Sinai Hospital, told Bloomberg Law.

Hospitals and doctors try to ensure payment by having patients sign a form saying they will be responsible for the costs if Medicare denies coverage, but this is a population that disproportionately faces problems finding housing and employment, which can make it difficult for them to afford the surgery, Keuroghlian said.

An examination of eight provider service codes that are primarily used for male to female transitions found an increase in Medicare payment for the use of these codes of about $150,000, from $843,679 in 2014 to over $1 million in 2016, according to a Bloomberg Law analysis. 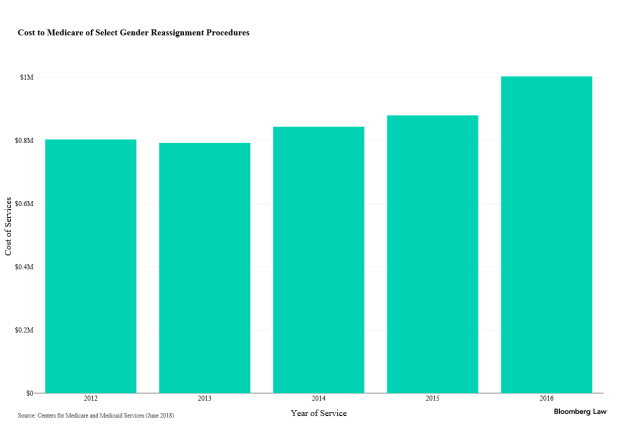 Medicare payment varies from region to region, but the Philadelphia Center for Transgender Surgery said Medicare would pay about $1,000 of a $12,600 vaginoplasty procedure in 2016.

The cost of chest surgery for gender reassignment is not necessarily more expensive than the cost of a mastectomy for cancer patients, according to a Bloomberg Law analysis. 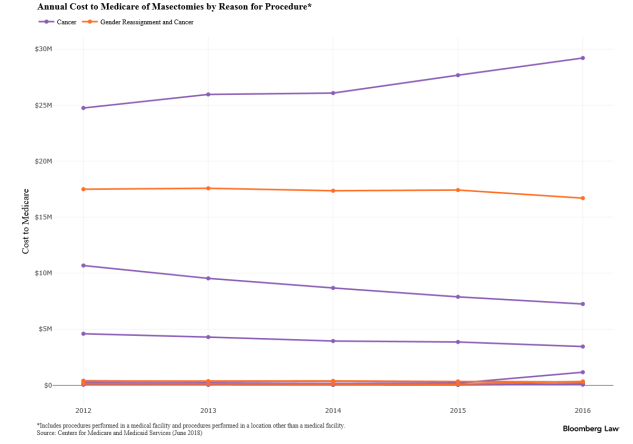 It is a “challenge for institutions that want to provide services under Medicare” to be financially sustainable because it reimburses for less of the surgery than Medicaid or commercial insurers, Garcia said. This has led to fewer private providers accepting Medicare for gender reassignment surgery.

Marci Bowers, a gynecologist and surgeon who specializes in gender affirmation surgery in Burlingame, Calif., previously accepted Medicare for the surgery, but she said there were two occasions where Medicare only paid one penny, so she had to opt not to take Medicare.

The uncertainty of coverage has led to doctors who perform gender reassignment surgery in private practice to opt out of Medicare. Surgeries covered by Medicare are typically only performed at university medical centers where surgeons can’t opt out, Karasic said.

Effect on State and Commercial Insurance

“Medicare is used as a guide for states and commercial insurance in terms of what would be a reasonable basket of services,” so the lack of guidance negatively affects all transgender patients, not just those on Medicare, Safer said.

HHS deciding to drop the ban was a signal to state and commercial payers that they could “feel comfortable instituting organized programs to mandate coverage,” Safer said.

Lifting the ban led to a “huge shift” in some states, making it illegal to exclude gender reassignment services, Garcia said, but the decisions are still disjointed.

“Nobody really wants to rock the boat with the Trump administration,” but it is a “strange status quo” to have a government insurer not tell providers if they will pay for a surgery, O’Brien Coon said.

“It’s a very unusual state of affairs in the U.S. for Medicare to be significantly inferior to Medicaid in an area of coverage,” O’Brien Coon said. The lack of a national coverage determination “is preventing any progress forward.”

There are about 1.4 million transgender adults in the U.S., according to a 2016 study from the Williams Institute at the University of California, Los Angeles. Of those 1.4 million, about 24 percent were on Medicare from 2000 to 2014, according to a 2018 study published by the Journal of the American Medical Association.

The rate of patients seeking gender reassignment surgery who were covered by Medicare or Medicaid increased almost threefold in 2014 compared with 2012 to 2013, according to the 2018 study.

It’s important for Medicare and Medicaid to cover these procedures because “that’s where the community is disproportionately getting reimbursed,” Keuroghlian said. 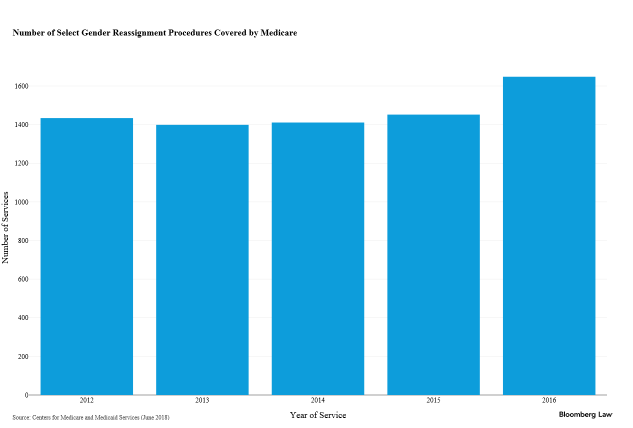 An examination of eight provider service codes primarily used for male to female genital reconstruction surgery found the codes were used 1,648 times in 2016, an increase of 14 percent from 1,411 in 2014, according to a Bloomberg Law analysis.

Prior to 2014, these codes were used for other conditions, but the increase starting in 2014 was likely due to gender reassignment surgeries.

About 3,200 people in the U.S. had gender confirmation surgery in 2016, an increase of 19 percent from 2015, according to the 2016 Plastic Surgery Statistics Report from the American Society of Plastic Surgeons.

Garcia said his patients are a “real mix” when it comes to age, but both he and O’Brien Coon see a high prevalence of younger Medicare beneficiaries seeking surgery.

O’Brien Coon said younger Medicare beneficiaries are “more prevalent” in his practice because “younger people are likelier to seek surgery.”

Garcia said he also sees older people who haven’t had the surgery because they couldn’t afford commercial insurance.

However, Loren Schechter, medical director of The Center for Gender Confirmation Surgery at Chicago-based Weiss Memorial Hospital, said the overwhelming majority of his patients on Medicare are 65 years and older.

“We tend to think of this as care that’s really being sought by young people,” Keuroghlian said, but “we have older folks routinely coming to us … seeking gender-affirming medical and surgical care for the first time.”

(Clarifies use of hormone therapy in the July 19 article In the paragraph beginning, "Some regions use the World Professional Association for Transgender Health's standards of care.")