The Centers for Medicare & Medicaid Services “pulled out all the stops and removed all the excuses for physicians and doctors not to participate,” in ACOs, said David Pittman, senior policy adviser at the National Association of ACOs.

ACOs are groups of doctors, hospitals, and clinicians that work together to provide coordinated patient care for beneficiaries in fee-for-service Medicare. When ACOs provide quality care and cut costs for the Medicare program, member providers share in the savings.

If the proposed changes boost the estimated 525,000-plus providers participating in ACOs, the 11 million-plus beneficiaries receiving care through ACOs would grow as well. This would move the CMS closer to its goal of having all 34.8 million traditional Medicare beneficiaries in an ACO or ACO-like payment model by the end of the decade.

Doing so would help shore up Medicare’s finances as millions of aging baby boomers born between 1946 and 1964 become program eligible in the coming years.

ACOs are a major component of traditional Medicare’s move from a fee-for-service payment model to value-based care, in which provider reimbursement is based more on patient outcomes and cost efficiency rather than the volume of services provided.

But participation in the Medicare Shared Savings Program—the CMS’ national ACO program and its flagship value-based care effort—has floundered since 2018.

NAACOS blames the drop-off on Trump-era rules that steered more ACOs into two-sided “risk” arrangements, in which their Medicare payments not only increased for providing quality care, but could also be reduced if beneficiary medical costs and outcomes didn’t meet expectations.

After seven consecutive years of growth, the number of ACOs participating in the shared savings program fell from a high of 561 in 2018 to 518 in 2019 and to 483 this year, according to NAACOS. 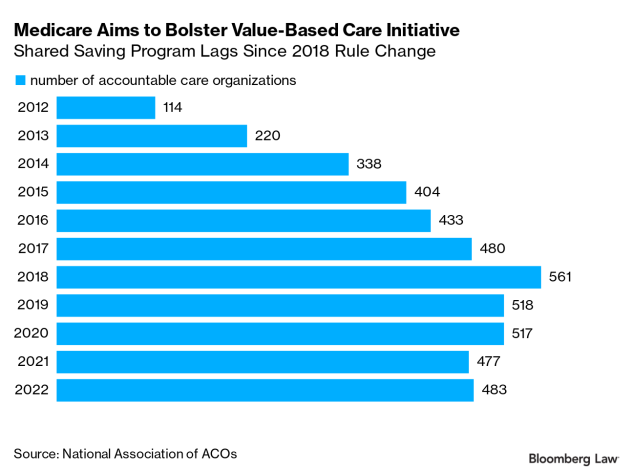 In a recent article, Medicare officials said small physician group practices and less-capitalized providers who typically serve underserved populations were among the most likely to leave the program.

To reverse the trend, the CMS is proposing that new ACOs could participate in upside-only risk arrangements for the full five-year participation agreement with Medicare, “so that they can gradually develop familiarity with the shift towards value and recruit additional health care providers that might be reticent to quickly adopt downside risk,” CMS officials said in a recent Health Affairs blog.

Doing so will further help “to grow participation in rural and underserved communities,” said Doug Jacobs, chief transformation officer in the CMS’ Center for Medicare during a recent press briefing.

The agency is also proposing new advance incentive payments of $250,000 “for smaller ACOs to provide upfront capital to build the infrastructure necessary to succeed” in the shared savings program.

Pittman said the money could also go for hiring additional staff necessary for ACO operations and to provide benefits, like transportation, meals, and other services to address social needs that may negatively affect the health of Medicare beneficiaries.

“This one of the first times traditional Medicare payments would be permitted to address the social determinants of health. And it is also expected to be an opportunity for providers in rural and other underserved areas to make the investments needed to become an ACO and succeed in the program,” Jacobs said.

The advance payment proposal is based on the CMS Innovation Center’s ACO Investment Model, which was tested from 2016 to 2018 and helped bring rural ACOs into the shared savings program, said Liz Fowler, director of the Center for Medicare and Medicaid Innovation.

“This is a great example of how our larger ACO strategy, where the innovation center tests new payment and service delivery models using the chassis of the shared savings program,” Fowler said during a recent press briefing.

The proposal would also add an equity adjustment to an ACO’s quality performance score to reward quality care delivered to underserved populations. If enacted, it would be one of the first efforts to “promote equity in a value based care program,” Jacobs said.