Before Rachel Martinez boarded her flight to New York City, she packed N95 masks, gloves, and hand sanitizer because the emergency room nurse couldn’t be sure she would find some waiting for her at her temporary job in the country’s coronavirus epicenter.

“I’m not naive to the fact that hospitals will say anything to get people down there, but I’m trusting that they’re not lying to me,” she said.

Martinez is one of the thousands of medical professionals whose jobs are dwindling outside of coronavirus hotspots and who are taking temporary jobs in places such as New York and Detroit. The moves are creating an unprecedented surge in the $17 billion medical staffing industry, with historic requests both from hospital systems needing temporary workers and from medical professionals considering new opportunities after being furloughed.

Professionals such as Martinez, who are taking traveling jobs for the first time, are considering a careful calculus balancing money, safety, and the possibility to make a difference against a pandemic that has shut down the country.

“I’ve run out of paid time off, and I can’t financially survive on what is part-time nursing currently with no end in sight with that,” Martinez said. “But my biggest reason is listening to the stories coming out of NYC. I can’t be an able-bodied, healthy emergency nurse and sit on my butt and not do anything.”

Since the virus outbreak, health care workers across America, especially nurses, have been pelted through Facebook and email with recruitment advertisements, some promising up to $13,000 per week, with travel and “luxury lodging” expenses for a temporary stint at hospitals responding to the crisis.

At a recent press conference in Frankfort, Kentucky Gov. Andy Beshear (D) held one of those advertisements up to the cameras and pleaded with nurses not to leave the state. He said Kentucky would need them if a surge of new cases crowded state hospitals.

“We need you. We don’t have excess,” he said. “We know that there might be other opportunities out there, but if you go to another state and come back, you’re going to have to self-quarantine for 14 days, and going to a hotspot that may need help and coming back, we’re going to have to be really strict about that if you do it because your potential for exposure is so much greater.” 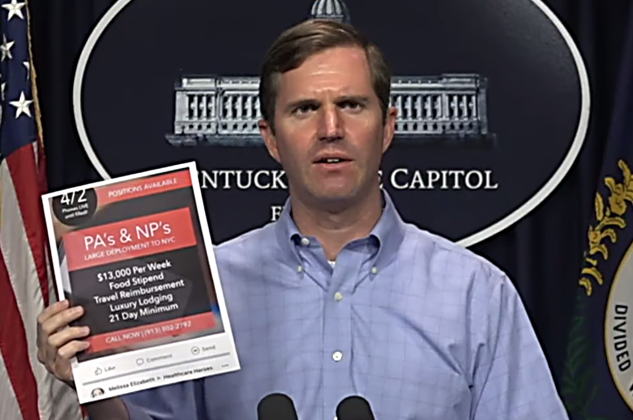 Historically, surges of health care professionals might be needed to travel for a flu outbreak or natural disaster, such as the 2005 response to Hurricane Katrina in New Orleans, said Kelly Rakowski, group president and chief operating officer for strategic talent solutions at AMN Healthcare, the largest health care staffing company in the country. But the coronavirus response blows all previous comparisons away.

“We’ve never seen anything like this before, not in this lifetime. It’s everywhere,” she said. The country has a huge “supply” of available health care workers because governors have shut down elective procedures to conserve hospital capacity and protective gear. Licensing restrictions have also been eased, meaning more workers can cross state borders to aid in virus response, she said.

AMN Healthcare, which last year had 12% of the total traveling nurse staffing market, saw requests for nurses from health care organizations double from February to March. In the greater New York City metro area, requests increased 1,000%. Meanwhile, the firm has heard from more than 25,000 health care professionals across the country interested in helping Covid-19 patients, and it has mobilized 6,000 clinicians in more than 350 cities.

“The health care industry is going to go through its own transition after this. But if we can keep these professionals engaged, that will be a really great benefit,” Rakowski said.

Shara Webb, a nurse in Colorado, sees advertisements for these positions and immediately deletes them because she thinks the hazard pay isn’t worth the risk.

“I’m not going anywhere without a hazmat suit,” Webb said. “I feel disposable. They’re just looking for bodies, and they’re willing to pay top dollar to put bodies on the front lines.”

Martinez, the nurse who took a temporary job in New York, calculates the risk differently.

“I took one of the lower-paying contracts because I know that there’s a higher chance that this would be a better situation for me,” she said. “If I’m making $5,000 per week before taxes, and someone else is working for $10,000 per week, you gotta wonder what nurses are facing there.”

The lack of elective procedure revenue has left specialized surgeons, normally in high demand, furloughed across the country and reaching for the phone to dial recruiters, putting out feelers for new opportunities.

“We’ve seen a spike in physician activity during this time,” said Steve Look, CEO of The Medicus Firm, an agency specializing in permanent placement that transitioned 500 doctors last year. “Many physicians are less busy or not working; their clinics are closed, so we’ve seen a big increase in physicians inquiring looking at jobs.”

The unprecedented shutdown of elective procedures means hospitals that struggle to cope and discontinue recruitment will lose marketshare to competitors who are finding new ways to locate workers, including job interviews conducted via webcast and searching for ways to hire physicians that could expand into new tele-health opportunities.

The new recruitment realities are creating pressure for Detroit hospitals that are struggling to bring in staff to combat one of the country’s worst outbreaks, said Ruthanne Sudderth, spokeswoman for the Michigan Health & Hospital Association. ”

“Just making payroll takes a lot of effort right now because of the lower revenues and higher expenses,” she said.

“We’ve been working with staffing partners to try to get additional staff into the state, but prices for that staffing have been very high,” Sudderth said. “There’s obviously some level of hazard pay in that, but it’s still difficult for a hospital to shoulder those prices when they’re already experiencing other expenses, and their elective procedure revenue has ended.”