Medicaid’s ability to address housing, nutrition, transportation, and other social needs that impact people’s health will be in play in a Supreme Court case examining the program’s flexibility in another area: work requirements.

The court is scheduled to hear oral argument March 29 in a lawsuit reviewing the Trump-era Department of Health and Human Service’s approval of work requirements in the Medicaid programs in Arkansas and New Hampshire.

But a court ruling against work requirements could end up cutting back on the HHS’s authority under the Biden administration to let states experiment with Medicaid—undermining hopes of using it in a broader effort to address social conditions that lead to poor health outcomes. Many advocates see this issue as particularly urgent during the Covid-19 pandemic.

That effort could include using Medicaid funds for a wider range of non-medical expenses, such as buying an air conditioner for a beneficiary afflicted with asthma, having mold removed from an apartment, or providing transportation services to distant grocery stores for people who live in food deserts.

Medicaid currently addresses those issues in a limited fashion, typically focusing on referrals to existing services: helping beneficiaries connect with housing support, finding a food pantry, or getting access to transportation services.

“If a ruling narrowed the scope of the Medicaid program so that it was purely for health insurance, then that could leave us stuck at the status quo,” said Manik Bhat, CEO of Healthify, which works with private health plans and Medicaid managed care organizations to address the social determinants of health.

“Then you’d be leaning into the administrative tasks of delivering health insurance, rather than looking at these broader social needs.” 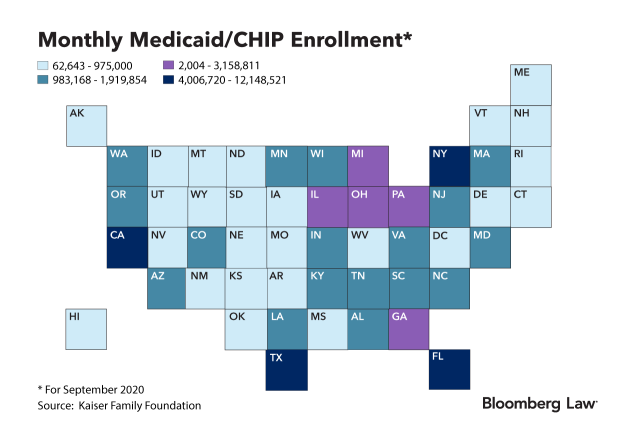 The Supreme Court case presents the Biden administration with a tactical dilemma, according to Nicholas Bagley, a professor at the University of Michigan School of Law.

The court could rule against requirements that Medicaid enrollees work as a condition of coverage, which would be, in effect, a policy win for the administration. But such a ruling could also hamstring the agency in developing future experiments with Medicaid.

That problem is already present in the U.S. Court of Appeals for the District of Columbia Circuit ruling against work requirements, he said.

“The circuit court ruling that is before the court on appeal is a good holding for Democrats who opposed work requirements,” Bagley said. “But it’s a ruling that circumscribes HHS’s discretion when it comes to future waivers.”

That problem may help explain why the Justice Department filed a motion Feb. 22 asking the high court to send the case back to the HHS without issuing a ruling, Bagley said.

The DOJ also asked the high court to vacate the circuit court ruling. That somewhat counterintuitive request suggests that those inside the Biden administration concerned with preserving the HHS’s wide discretion in administering Medicaid had prevailed over those concerned with the question of work requirements, he said.

“I can imagine them having two thoughts,” Bagley said. “On the one hand, they like the D.C. Circuit decision because it takes work requirements off the table for the future. But I can also see them thinking, this could be a problem for some of the waivers we’d like to do in coming years that might enable Medicaid programs to come up with creative uses of Medicaid money to help people get healthier, and to address needs that go beyond health care.”

Some analysts caution against exaggerating the likelihood the court will significantly constrain Medicaid’s ability to address social needs.

The key problem with work requirements is that they act as a practical barrier to health coverage, and therefore fall outside the purposes of Medicaid, said , a professor at the George Washington University Law School.

But expanding the definition of benefits under Medicaid wouldn’t have the same effect, she said.

“What you do when you insure the poor under Medicaid is you entitle them to medical assistance,” Rosenbaum said. “It is a perfectly respectable experiment to expand the meaning of the term ‘medical assistance’ to include things we would not include in a conventional insurance plan.”

But using Medicaid to address social needs in a serious way will raise questions of the most appropriate use of limited funds.

Making such changes—such as systematically screening beneficiaries to determine their needs, developing networks of service providers, connecting beneficiaries with appropriate services, and managing the resulting data—would be very expensive, and could divert funds from more traditional uses, said Bhat, who favors expanded use of Medicaid funds to meet social needs.

“The question is, what do we want Medicaid to be?” Bhat said. “If we want it to be real support for families and their health, we need to start getting creative and go back to the drawing board on what is going to drive health. And that’s what we’re talking about: using our resources to have the biggest impact on health.”

A lower court and the D.C. Circuit declared the HHS’s approvals of work requirements improper because, the courts said, the HHS failed to consider the impact of work and community-engagement requirements on the primary objective of Medicaid: providing access to medical care.

Work requirements first emerged as a policy option for able bodied adults in Medicaid during the Trump administration. Critics say they’re unnecessary because most adult Medicaid beneficiaries are already working, and the requirements cause people to leave Medicaid or not sign up in the first place.

Supporters say employment is important to health and acts as a stepping stone to independence. They also contend that experimenting with work requirements is valid under the Medicaid statute, which makes room for demonstration projects under the Section 1115 waiver authority.

The Biden administration signaled Feb. 12 that it intends to rescind the approval of work requirements in the 12 states that received approval from the Centers for Medicare & Medicaid Services during the Trump administration.