South Dakota became the latest Republican-controlled state to expand Medicaid by popular vote, underlining the success of efforts to rely on voters to sidestep partisan legislatures.

The ballot initiative won Tuesday with 56% of the vote, making South Dakota the seventh state to expand the low-income health program by ballot measure. The state will now add more than 40,000 Medicaid-eligible people after July 1, 2023.

Supporters say the success of the South Dakota vote could lay the groundwork for restoring the state’s abortion rights, which are among the most restrictive in the country. The result also put the focus on Florida as the next ballot target among the 11 states that haven’t taken the option to expand the federal health insurance program for low-income people that was offered by the Affordable Care Act.

“We’re already in the streets collecting for 2024,” Rick Weiland, co-founder of the group Dakotans for Health, said about gathering signatures for an abortion rights initiative. Weiland’s group supported Medicaid expansion in the state.

The coalition that led a successful Medicaid expansion in the state, however, won’t be the one leading the effort to grant the right to abortion access. Groups like South Dakotans Decide Healthcare, part of the coalition, aren’t affiliated with Weiland’s effort to get abortion on the ballot in 2024. 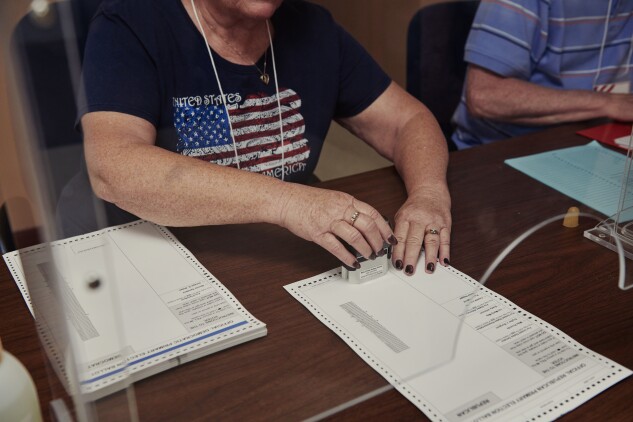 An election official sits behind a protective barrier and stamps a ballot at a polling location in Sioux Falls, S.D., in June 2020.
Photographer: Dan Brouillette/Bloomberg via Getty Images

Statewide ballot initiatives to protect abortion rights in California, Michigan, and Vermont were all successful this year, and voters in Kentucky rejected a proposal that said people in the state don’t have a right to access the procedure.

Other Republican-controlled states with abortion bans that also passed Medicaid expansion at the ballot box could follow suit, if the right conditions are present. Sarah Standiford, the national campaigns director for the Planned Parenthood Action Fund, said her group has watched these states closely but noted they’ll need local support to be successful.

“There isn’t a road map that’s the same everywhere: these decisions have to be made locally,” she said.

Since 2014, groups such as the Fairness Project have been supporting ballot initiatives to expand Medicaid in states where the legislatures have repeatedly rejected the idea. Expanding Medicaid means increasing the income eligibility limit of the state-run public health insurance program, a move that earns states expanded federal funds to offset the costs.

Successful efforts have garnered support from both health care and business groups and South Dakota fit that mold.

South Dakotans Decide Healthcare reported donations of $500,000 each from Avera Health, Monument Health Rapid City Hospital, Sanford Health, and the South Dakota Association of Healthcare Organizations. These represent the largest hospital groups in the state. The political committee spent more than a $1.6 million on ads in the state supporting the ballot measure, called Amendment D.

In comparison, a group called No On Amendment D reported donations of less than $4,000 to oppose the effort.

Researchers who study state health policy say Florida is the only state where Medicaid expansion will be possible in the near future via a citizen vote.

“We’ve almost worked ourselves out of a job,” said Kelly Hall, executive director of the Fairness Project, which has backed the South Dakota and other Medicaid expansion ballot efforts.

Of the 11 states that haven’t moved to expand Medicaid coverage, only two permit ballot initiatives—Florida and Wyoming. Mississippi permits ballot measures, but the process needs to be reworked before it can be used.

“It’s more likely we’re going to see expansion by legislation in any states that do it other than Florida and maybe Mississippi,” said Adam Searing, an associate professor at Georgetown University where he studies Medicaid and other state health policy.

Mississippi’s Supreme Court struck down the state’s ballot initiative process this year, declaring it inoperable. Until a new process is created, the state can’t put expansion on the ballot.

(Updates with lack of connection between Medicaid coalition, abortion efforts in fifth paragraph.)