Over 90 deals across many sectors of the health-care industry made May another strong month for transactions in this hot industry sector.

Long-term care deals led the curated list of deals, either announced or closed during the month, compiled for Bloomberg Law by a team of investment bankers who advise health-care industry clients. The 30 long-term care entries in May is double the number on the list that involved the next two leading sectors: hospitals and health systems, and physician practices and services.

The 86 long-term care-related deals on the 2018 year to date list, along with 25 home health and hospice-related entries and 25 rehabilitation services-related entries, make a total of 136 deals either announced or closed year-to-date in sectors that make up the long-term care continuum. This large number “signals that these related sectors will continue to heat up as more baby boomers age into their 70s and 80s and require some level of care along the ‘long-term care services continuum,’” Gary W. Herschman, an attorney with Epstein Becker Green in New York and Newark, N.J., told Bloomberg Law.

The long-term care continuum ranges “from home health and rehab on one end, to assisted living and then to nursing homes on the other end,” Herschman said. Herschman, a Bloomberg Law advisory board member, advises clients on proposed deals.

The hospital and health system sector, by contrast, “experienced a slight softening in deal making activity,” Hector M. Torres, an investment banker at ECG Management Consultants in Chicago, told Bloomberg Law. May saw 15 list entries in this sector, compared with an average of 18 entries per month in January through April. Still, the May number represented only a 1 percent decrease in hospital/health sector deal volume when compared with May 2017, Torres said.

Additionally, the number of total hospital/health system dealse either announced or closed for the first five months of 2018 increased by 31 percent over 2017, Torres said. This solidifies “the continuing trend of strategic affiliation, partnership, and transactional activity among and between hospitals and health systems across the U.S.,” he said. 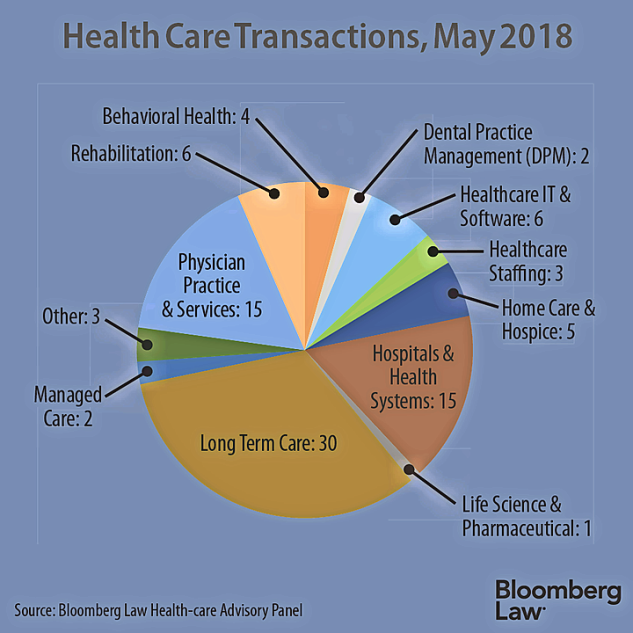 “Several of the hospital transactions announced or closed during the month vividly illustrate the increasing pressures that smaller and stand-alone hospitals continue to face as reimbursement shifts from fee-for-service to quality-based or risk-sharing arrangements, as the operating and regulatory environment becomes more complex, and as capital and technological needs intensify,” Paul D. Gilbert, an attorney with Epstein Becker Green, Nashville, Tenn., added. “In a few of these transactions, it appears that independent hospitals are joining larger systems to preserve hospital services for their communities,” he told Bloomberg Law.

Gilbert and Torres both highlighted an innovative collaboration between Advocate Children’s Hospital and NorthShore University HealthSystem, announced May 16. The health-care providers entered into “a joint operating agreement with the intent of accelerating technological advances, streamlining patient care delivery, and simultaneously eliminating excessive economic waste, all in an effort to stave off ever-increasing competitive headwinds” in the Chicago-area market, Torres said.

Gilbert said the collaboration “will have more than 600 pediatricians, including pediatric specialists and subspecialists,” will “share and develop ambulatory care centers,” and will “align academic excellence and care models.” This partnership “avoids the unfortunate complications of the merger explored by these two highly respected institutions,” while “creating an exceptional network to benefit children, parents, and the community,” Gilbert said.

The Advocate-NorthShore relationship, moreover, “should also pave the way for other collaborative efforts among these two systems and the University of Chicago Pritzker School of Medicine,” Gilbert said.

Large regional hospital systems are continuing to “undertake strategic affiliations and acquisition transactions in an effort to maintain market relevance,” Torres said. Partners Healthcare, for example, announced it has signed a definitive agreement to acquire Care New England. The deal has been in the works since April 2016, Torres said. Partners deemed Care New England profitable enough to proceed with the transaction after the latter posted operating gains of about $4.4 million in March.

Circleville, Ohio’s Berger Health System, a single-hospital system with $76.2 million in revenue for fiscal year 2016, entered into formal negotiations to join OhioHealth, a Columbus-based system that had revenue of $3.7 billion in 2017, Gilbert said. If the deal closes—potentially in late 2018—Berger would be OhioHealth’s 12th hospital, he said.

Torres added that the deal would expand OhioHealth’s geographical footprint, while enhancing its clinical service offerings in the tertiary market. A tertiary hospital is one that offers highly specialized care, usually upon referral from a primary or secondary provider.

Also in Ohio, the city of Massillon bought Affinity Medical Center and its related property and equipment, giving the city ownership of the 156-bed hospital, Gilbert said. Quorum Health, based in Brentwood, Tenn., permanently closed the hospital in February, he said.

In Michigan, Huron Medical Center joined a 14-hospital system, McLaren Health Care Corp., in an effort to expand its services to the community, Gilbert said. The hospital is located in Bad Axe, Mich., and serves Huron, Sanilac, and Tuscola counties.

There also were 15 deals in the physician practice and services sector announced or closed in May. With 83 transactions so far in 2018, “physician practices continue to be highly sought after as new players, including new private equity platform companies and ambulatory surgical center companies, dive into this space and expand their holdings,” Herschman said.

A good example, according to Robert Aprill, is AMSURG Corp.'s acquisition of Horizon Eye Specialists & LASIK Center. This “is the first time the ASC management company has acquired a physician practice,” Aprill, who is an investment banker with Provident Healthcare Partners LLC, Boston, told Bloomberg Law. 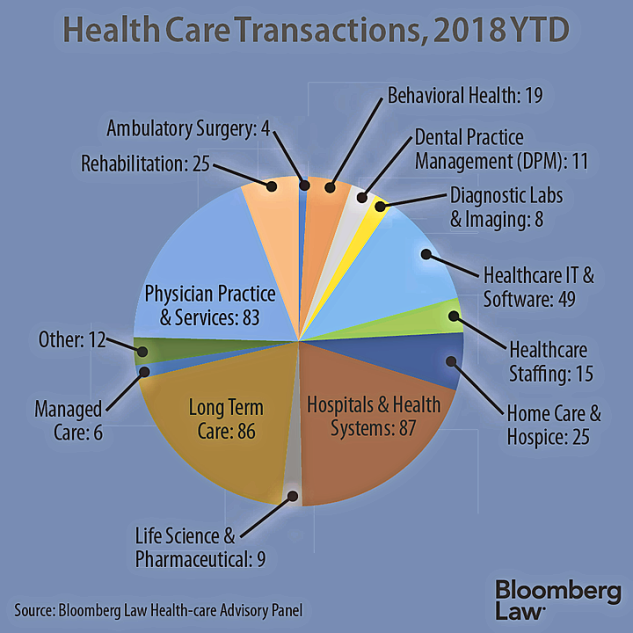 This signifies that AMSURG is “looking to build out a network of practices to accompany their vast national network of ASCs to rival what private equity groups have built,” he said. Other ASC management companies, like Surgery Partners and Surgical Care Affiliates, have used the same strategy, Aprill said. He predicted AMSURG’s move will fuel more competition and consolidation among physician groups of all types.

Turning to particular practice types, Herschman noted that the most expansion has been seen in dermatology and eye care, but said growth also is expected to heat up soon as interest grows in orthopedic, gastroenterology, urology, radiology, and fertility practices. Aprill added that dermatology is “flaming hot,” with nine transactions appearing on May’s list—60 percent of all physician practice entries.

Although lower in volume, deals in the health-care information technology sector are expected to grow, as providers “seek software and other IT solutions” to help them keep patients healthy and, when needed, provide quality care in the most cost-efficient manner and setting, Herschman said.

Deals are expected to remain steady in the behavioral health sector as well, Herschman said. The need for behavioral health care is becoming more widely recognized, and funding for these services is on the rise, he said.

Five months in, “it looks like 2018 is set to be another banner year for health-care deals,” Herschman said.