The Biden administration could provide some LGBTQ people with insurance coverage for IVF and other fertility treatments pending an update to ACA rules.
Photographer: Krisztian Bocsi/Bloomberg

The Biden administration is considering a requirement that some health plans cover fertility treatment for policyholders regardless of their sexual orientation or gender identity.

The administration could use a pending update under the Affordable Care Act to address the definition of infertility often used by insurance plans to determine eligibility for in-vitro fertilization—a definition that is impossible for some LGBTQ individuals to meet.

Changes would apply to Obamacare plans and some group health plans after going through a notice-and-comment process, but could have wider national implications amid an emerging debate about what it means to be infertile.

“This is just one of those spaces where the way that we think about what is necessary medical care is running to catch up with our understanding of intimate relationships,” said Nicole Huberfeld, a professor at the Boston University School of Law and School of Public Health.

Many insurers base coverage on the Centers for Disease Control and Prevention definition of infertility—“not being able to get pregnant (conceive) after one year (or longer) of unprotected sex"—when deciding who is eligible for fertility treatment coverage. 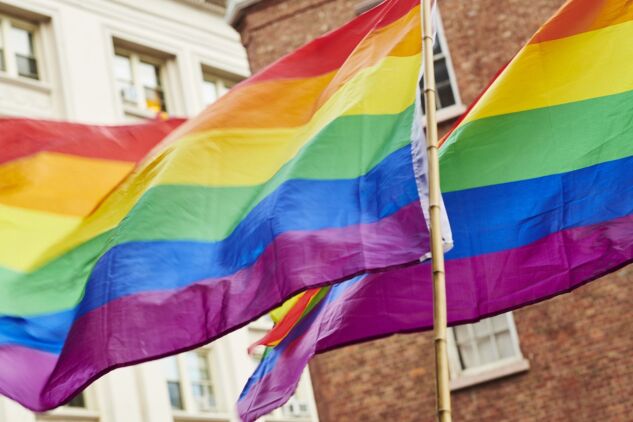 “Is that a discriminatory definition?” said Huberfeld. “In a world where same-sex couples have easier access to methods of reproduction, we probably should reconsider the definition of infertility and even the terminology itself because those couples aren’t suffering infertility. They’re seeking fertility by different means.”

The Department of Health and Human Services could also make clear that state-mandated coverage of IVF is an “essential health benefit,” which means states wouldn’t be responsible for the added cost to insurers as a way to further expand the benefits.

But some conservative groups strongly oppose changing how the government defines infertility for health coverage.

“It is absurd to say it’s discriminatory” currently, said Roger Severino, who ran the HHS’ Office of Civil Rights under President Donald Trump. “Under this flawed logic, two men would be entitled to IVF treatments being administered to a woman because they have chosen to be in a same-sex relationship.”

The HHS is updating regulations under Section 1557 of the Affordable Care Act as it applies to fertility treatment. The Office of Management and Budget has scheduled meetings with advocates and opponents through Tuesday, so the rule is unlikely to come out before the end of May.

Changes to Section 1557 would apply to about 10.8% of Americans with health insurance, according to data from the Kaiser Family Foundation. That includes about 18.7 million people who were on individual market insurance plans, and 12.8 million on small group plans, as of 2019.

The changes or any mandates by states would not apply to self-funded employer plans, and about 67% of workers nationally are in self-funded plans, according to Kaiser.

The Heritage Foundation, where Severino is now vice president of domestic policy, was scheduled to meet Monday with the administration to state its opposition to the Section 1557 proposal.

“To accept this would push our civil rights laws past the breaking point,” Severino said.

The impact of any HHS action is clouded by the specter of the US Supreme Court overturning the landmark Roe v. Wade decision in the coming months and ceding abortion rights to the states. In that scenario, some state laws banning abortion could be applied to IVF, which can result in extra embryos that are discarded, frozen, or donated.

The HHS announced last year that it would interpret “sex” in the statute itself to include gender identity in light of the Supreme Court’s 2020 ruling in Bostock v. Clayton County that firing an employee for being gay or transgender violates Title VII of the Civil Rights Act of 1964.

The administration has already addressed discrimination in infertility treatment coverage in one situation in a January proposed rule, saying that “age limits are presumptively discriminatory when applied to services that have been found clinically effective in certain age groups” unless there is clinical evidence showing that is justifiable based on an individual’s reproductive health.

Section 1557 was interpreted to apply to all LGBT individuals under the Obama administration, but the Trump administration reversed that.

Arguments over who is eligible for IVF coverage have already begun in the courts.

is facing a lawsuit claiming discrimination against LGBT couples in its coverage of fertility treatments. The suit argues the definition of infertility used by Aetna—"the failure to establish a clinical pregnancy after 12 months of regular, unprotected sexual intercourse or therapeutic donor insemination"—is discriminatory under Section 1557. 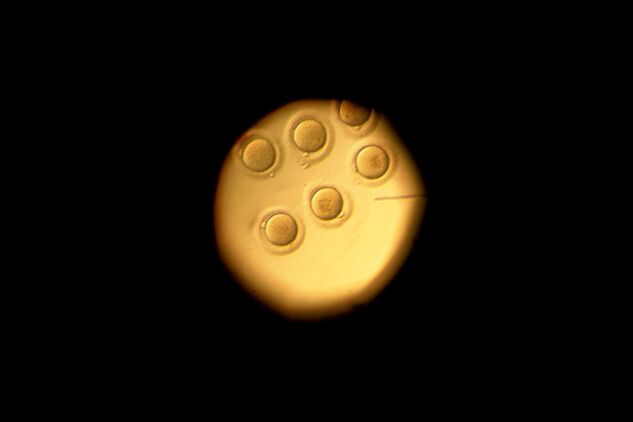 Human embryos on a petri dish are viewed through a microscope at an in-vitro fertilization laboratory in California.
Sandy Huffaker/Bloomberg News

Contending that the definition of infertility used by many insurers and states is discriminatory is a “decent argument,” said Elizabeth Sepper, a professor at the University of Texas at Austin School of Law.

“Some of the definitions of infertility—the one for instance in the Aetna lawsuit—explicitly invokes heterosexual intercourse, and in another provision invokes in the absence of a male partner, so you can clearly see the sex discrimination angle in that the decision changes depending on the sex of one of the partners in a couple,” she said.

The often-used definition for infertility is “not, on its face, discriminatory toward lesbian women,” although it does have a disproportionate impact on same-sex couples, said Joshua Blackman, a law professor at the South Texas College of Law Houston. However, it’s harder to argue that is discrimination, he said.

Many states and insurance plans define infertility in a way that make it more difficult for same-sex couples and single women to get insurance coverage, infertility advocates say. Without that coverage, someone in the US could spend $19,200 for a single cycle of IVF, a process that often requires multiple cycles to be successful, according to a 2014 study.

Arkansas, Hawaii, and Texas have additional provisions making it impossible for cisgender same-sex couples to gain coverage of these services, as they require use of a patient’s eggs and their spouse’s sperm.

A definition supported by infertility advocates—who say this one is more inclusive—was made law in Illinois in January.

That definition has two additional ways someone could be deemed infertile: “A person’s inability to reproduce either as a single individual or with a partner without medical intervention; or a licensed physician’s findings based on a patient’s medical, sexual, and reproductive history, age, physical findings, or diagnostic testing.”

If the Biden administration required nondiscrimination in eligibility criteria for IVF coverage, “it would require some management by insurance companies to think more about, practically, ‘What does it mean for someone who is in a same sex couple to be infertile?’” Sepper said.

Addressing the definition of infertility used by most insurers through Section 1557 is also complicated by whom the provision applies to.

The Obama administration took the view that if a health-care entity was doing business through Medicare, Medicaid, or the Obamacare exchanges, then 1557 applied to it. The Trump administration reversed that in a 2020 rule. The Biden administration could change back to the Obama-era view in the upcoming regulation.

“The ultimate question is, ‘How far do you think the language ‘health-care program’ can go under 1557?’” said Huberfeld. “And I’m not sure that health insurers that don’t have a direct link to federal rules or funding are obviously covered by 1557.”

Requiring any insurer or state that covers IVF to have a definition of infertility that doesn’t exclude LGBTQ policyholders would only affect those specific plans and states, said Margaret Swain, a Baltimore-based attorney who specializes in assisted reproductive technology law. And if that plan only provides minimal coverage, then same-sex couples would only receive that minimal coverage.

If an insurer doesn’t cover IVF at all or equally applies its policy, “then it’s harder to make a claim of discrimination as opposed to if the coverage was based on a particular hook that a protected class by definition wasn’t going to be able to have,” said Nidhi Desai, an Chicago-based attorney at Desai and Miller who focuses on assisted reproductive.

But, said Sepper: “It does seem like once an insurance plan has determined to cover fertility treatments that they have to cover same sex couples equal to opposite sex couples.” 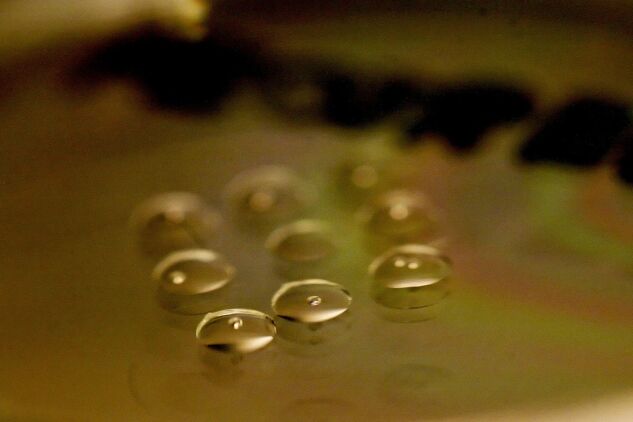 Human embryos are suspended in dots of liquid on a petri dish at an IVF laboratory in California.
Photographer: Sandy Huffaker/Bloomberg News

Katie Keith, director of the health policy and the law initiative at Georgetown Law’s O’Neill Institute, said state regulators are increasingly asking her about restrictions on the availability of IVF. And advocates want clarity on how states could pass mandates for fertility treatment coverage without running into federal laws requiring them to defray additional costs to insurers.

At least 17 states require some health insurance plans to offer or cover fertility treatments, according to a 2019 report by Avalere Health, a health-care consulting firm. Seven of those cover them for LGBT individuals.

However, the Affordable Care Act requires that states defray the costs of any new mandates that exceed the essential health benefits—a set of services most insurance plans must cover.

“Confusion around the ACA has been an obstacle in some states because states are fearful of defrayal and that passing infertility mandates would constitute a brand-new benefit or mandate or essential health benefit that the state would then be on the hook for to defray the cost,” said Betsy Campbell, chief engagement officer of Resolve: The National Infertility Association.

For instance, Colorado’s insurance commissioner argued to the HHS that the state’s law was “an extension of maternity care and should not be considered a new mandate,” she said.

When New York state went to update its law around fertility treatment coverage, the governor was “afraid that the insurers would say that getting rid of the IVF exclusion and requiring IVF (coverage) would constitute a new mandate” so they made it only effective for large group insurance market, Campbell said. Defrayal only applies for changes made in the individual and small group insurance markets.

“A number of states are feeling like they can’t pass new mandates. So I think the administration needs to provide more flexibility to states and greater clarity about what states can do to address the health care needs of their residents,” Campbell said.

The Centers for Medicare & Medicaid Services could make it clear that IVF coverage is an essential health benefit in guidance to state insurance commissioners, opening the floodgates for states to pass new mandates without fear of those costs.

States also won’t have to defray those costs if it would lead to a fewer than 1% increase in premiums. Massachusetts, which mandates fertility treatment coverage with no financial cap, reported infertility treatment cost the state between 0.12% and 0.95% of premium costs in a 2016 report.

Advocates for covering IVF have made several arguments that a defrayal wouldn’t be necessary by any states passing new mandates.

Essential health benefit requirements “obliges the state to provide for coverage of rehabilitative, habilitative and maternity related coverage,” Swain said. Infertility is recognized as a disease under the Americans with Disabilities Act because it “maintains or restores an important life function and thereby constitutes habilitative or rehabilitative services.”

Changes to a state’s plan to come into compliance with nondiscrimination requirements also “shouldn’t be something that you’d have to defray the cost of,” Keith said.

The only way to mandate coverage for all insurance plans nationally would be for Congress to take action.

Rep. (D-Conn.) and Sen. (D-N.J.) have repeatedly introduced legislation to require most private insurance plans and Medicaid to cover fertility treatments. But neither chamber on Capitol Hill has taken up the bills since July 2021.

To contact the editors responsible for this story: at bbierman@bloomberglaw.com; at ghenderson@bloombergindustry.com