State constitutional amendments fueled by a backlash against the Affordable Care Act are now forcing courts to confront the very meaning of “health care” where abortion is against the law.

Abortion rights advocates are focusing on language granting the citizens of Ohio and Wyoming broad rights to choose their health care. The constitutional language came out of fears that Obamacare would limit how Americans could get care.

The new lawsuits urge courts to find a right to an abortion within that state constitutional context, essentially declaring that a right to health care includes medical procedures terminating pregnancy.

Anti-abortion advocates are pushing back, using a fetus as a focus point. “The child is entitled to health care as much as the mother is—the debate has always been, where does that interest begin in terms of gestation,” said Joshua Brown, lawyer for the Christian legal group One Nation Under God Foundation.

In Brown’s view, Ohio defined “health care” when it enacted a law prohibiting abortions after fetal cardiac activity is detected. At that point, he argues, any health-care rights kick in for the fetus as well.

It’s not clear how the courts will eventually come down. Wyoming State Sen. Cale Case (R), a co-sponsor of his state’s “health care freedom” amendment, expects them to resolve that issue in a way that wasn’t part of the discussion when voters changed Wyoming’s Constitution.

Because of the amendment’s broad wording, “I think Wyoming is going to have to come down on the side that abortion is health care,” said Case, a Libertarian-leaning Republican who supports abortion access. 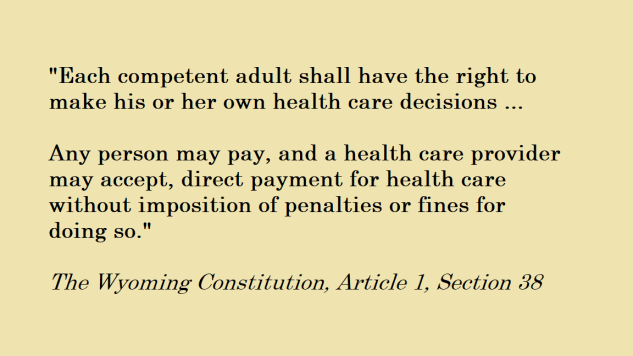 The first judge who reviewed the 2011 health-care amendment granted a preliminary injunction on Wyoming’s ban on most abortions. GOP legislative leaders and Right to Life Wyoming now want to intervene, writing in a brief that the case “threatens the Wyoming Legislature’s long-awaited authority to reasonably regulate abortion.”

The Ohio Supreme Court is weighing whether to take a similar case challenging Ohio’s ban on abortions around six weeks gestation.

Both of the state provisions under review grew out of suspicions about the Affordable Care Act. Multiple Republican-led legislatures looked for ways to make sure people wouldn’t be forced to buy insurance they didn’t want and wouldn’t be denied treatment they needed.

The versions adopted by Ohio and Wyoming granted explicit rights to pay for the health care services residents want. 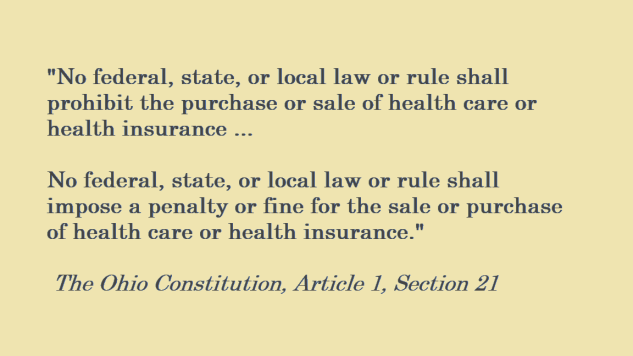 Since a fetal life is involved in pregnancy, states have an interest in regulating or banning abortion, Alito wrote. Thus, state abortion laws are “governed by the same standard of review as other health and safety measures.”

With Wyoming’s state-based right to health care, “the Court could find that the Wyoming Constitution affords all Wyoming citizens with a fundamental right to make their own health care decisions and that includes a Wyoming woman’s right to make her own decision regarding abortion,” Teton County District Court Judge Melissa Owens said in her preliminary opinion.


Abortion clinics challenging Ohio’s law point to the state Constitution’s provision banning laws that “prohibit the purchase or sale of health care or health insurance.” That helps bolster their argument that Ohioans have a right to terminate pregnancy, said Becca Kendis, part of the legal team and a reproductive rights fellow at Case Western Reserve University School of Law.

“The state itself has defined abortion as health care, it treats abortion as health care, it’s regulated by the Ohio Department of Health,” Kendis said. “There’s no carve-out that says abortion should not be included. It’s broad language, and whether or not people were voting with something specific in their mind, the amendment still supports the idea of this value of getting the government out of health-care decisions.”

Ohio constitutional law expert Steven Steinglass, dean emeritus at the Cleveland-Marshall College of Law at Cleveland State University, said the abortion providers have a “strong case” because of several affirmative rights in the Ohio Constitution.

The Wyoming and Ohio attorneys general, which support upholding their state bans, didn’t respond to requests for comment. Anti-abortion groups have added their voices in defense of these restrictions, filing briefs urging courts to take a narrow view of what health care means in the abortion context.

In research published in May, Field and her colleagues analyzed how Ohio’s abortion restrictions created ethical dilemmas for doctors with pregnant patients.

For example, some OB-GYNs reported having pregnant patients with life-threatening maladies, but hospital legal teams wouldn’t clear the patients for abortions out of concern for the institutions’ civil or criminal liability under the state’s abortion restrictions.

Patients such as those prescribed radiation or chemotherapy for auto-immune disorders or cancer can fall into a legal limbo: doctors wait for hospital system lawyers to make decisions, and patients suffer unaided, Field said.

“Is abortion health care? It’s a circular question, because if we go back to the physicians they’ll say, ‘Absolutely,” Field said. “It’s the medical establishment that gets to define these things in America.”