Health care workers in St. Louis, Missouri, join a protest over police brutality and racism on June 5, 2020.
Photo by Michael B. Thomas/Getty Images

Patient advocates say a wave of local government resolutions declaring racism a public health crisis could be a breakthrough moment in national efforts to improve health outcomes for communities of color.

More than 60 cities and towns—including Los Angeles, Denver, Boston, Pittsburgh, and Cleveland—have passed the declarations since last year, according to the American Public Health Association. The efforts picked up steam following the disparate impact of Covid-19 on minority communities and the police killing of George Floyd.

Using stark, matter-of-fact language, the resolutions acknowledge a sad truth, advocates say. But they also provide a valuable marker to guide and assess future health policy decisions. “It’s a way of saying to the public, ‘Hold us accountable,’” said Camara Jones, an Atlanta epidemiologist and a former APHA president.

Advocates say the growing focus on race and health also validates the work of a handful of local governments that tried to address health inequities and racial disparities years ago.

In 2000, Genesee County, Mich., made confronting racism part of its effort to cut black infant mortality rates in the Flint area. The effort was funded by a grant from a federal program created in 1999 to address health disparities and is still in place today.

In 2005, the Boston Public Health Commission formed an anti-racism working group, which is now an advisory committee, helping to ensure its policies and practices support racial justice and health equity.

These and other longstanding efforts to attack racism as a health threat can help inform future efforts to deal with the problem, Jones said.

“Fragmented attempts to address racism have been there for years, and this may now be the opportunity for them to gain traction,” Jones added.

While far from a cure-all, the new public declarations are notable for moving the discussion of racism “from an interpersonal level to talking about it at an institutional, or structural, level in a way that hasn’t really been done before,” said Dawn Hunter, southeastern region deputy director of the Network for Public Health Law.

In Connecticut on July 7, Manchester became the ninth city or town in the state to pass a resolution recognizing racism as a public health issue, joining others including Middletown, Milford, Hartford, and New Haven. Another dozen or so cities are considering similar action, said Tekisha Dwan Everette, executive director of Health Equity Solutions, the non-profit advocacy organization leading the statewide effort.

“Our high-level goal is for every city and town in the state to adopt a measure, along with the state Legislature and governor,” Everette said. Her group educates elected officials about the national movement and other cities’ resolutions “so that people understand this is not something that is made up. These are public health professionals who are saying this is what needs to happen,” Everette said.

Health disparities among disadvantaged groups are “symptoms of broader social and economic challenges that are rooted in structural and systemic barriers,” like housing, education, and the justice system, “as well as underlying racism and discrimination,” according to the Kaiser Family Foundation.

Blacks, American Indians, and Alaska Natives have worse health outcomes compared with whites across most health status measures, including infant mortality rates, HIV and AIDS diagnoses, and death rates, according to a Kaiser analysis. Data on Hispanics, who can be of any race, was mixed, but they also experience large disparities on certain measures.

And in the current pandemic, communities of color have been hit harder by Covid-19. Blacks are over 3.5 times more likely to die from Covid-19 than whites, and Hispanics are nearly twice as likely, according to researchers at Yale and the University of Pittsburgh. 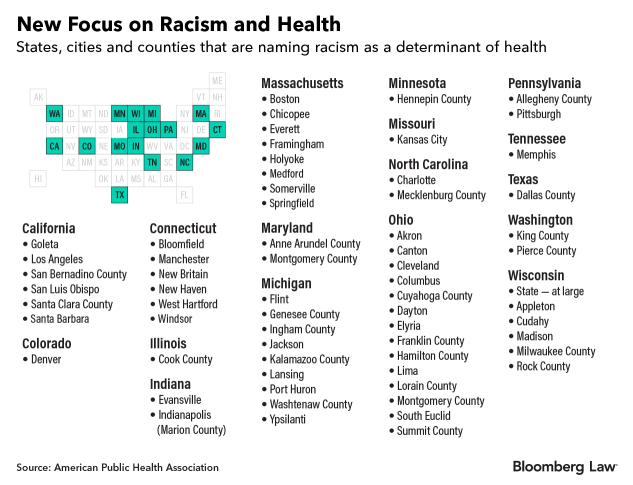 Most of the resolutions acknowledge those disparities. The documents typically feature a statement that racism is a public health emergency or crisis followed by a commitment to make local governments more accountable to the problem. Many also commit to work with affected communities on solutions, to change workforce development and hiring practices that fuel disparities, and to prioritize anti-racist policies, according to Hunter’s research.

A resolution in Akron, Ohio, for example, calls for a special task force to develop a 5-year “Equity and Social Justice Strategic Plan.” Summit County, Ohio, created a Special Review Committee that will report on the problem and make recommendations by the end of the year. And Somerville, Mass., tied its emergency declaration to proposals to revamp police operations.

Most of the new measures are being adopted amid a global pandemic and a renewed Black Lives Matter movement following the police killing of George Floyd. But Milwaukee County, Wis., passed one of its first racism resolutions in May 2019. The document noted the area’s high black infant mortality rates. The Milwaukee City Council passed a similar measure two months later.

Jones said it’s no coincidence that Milwaukee was one of the first counties to report in April 2020 that black men were being infected with Covid-19 at higher rates.

“Is that an accident? No,” Jones said. “Milwaukee, the people, already knew racism is a public health crisis. It made them ask the question,” about disparate impacts.

“There was some resistance, yes,” Valenzuela recalled after King County, Wash., launched its Equity and Social Justice Initiative, amid data showing wide disparities in health insurance coverage, infant death rates, diabetes and other health measures for blacks and Hispanics in the Seattle area.

So Valenzuela and others spent time on community engagement and education, calling for racial equity and putting more resources in communities where the need was greatest. Over time, their outreach helped build support for the passage of a 2015 tax levy to fund early childhood development, Valenzuela said. It also influenced county plans to develop public transportation options that benefit low-income communities, he added.

Local governments pursuing similar long-term commitments to dismantle racism will need strong political will and leadership, Valenzuela said. They must also be willing to meet affected communities “where they are” and to have “tough conversations” about their long-term vision.

Advocates are watching to see how local governments follow through on their public resolutions.

“If you really want to address racism, you have to do massive investment to change the wealth imbalance” in disadvantaged communities and “bring more people to the decision-making table,” Jones said.

To build on the momentum, supporters must push local officials to collect health data using racial, ethnic, gender, economic, and geographic indicators so people can see exactly where the needs and disparities are, said Georges Benjamin, executive director of the APHA.

Better data can also inform and support the reallocation of funding and resources toward populations and areas struggling with persistent disparities. Supporters should also call on officials to assess the impact of future health policies on communities of color before they are enacted, Benjamin said.

“Do you have the right alliances and partnerships? Are you involving the people in your process enough? And are you intentionally looking at how communities of color can engage with your policymaking process? Those are really key, initial important pieces that they can do right away,” she said.

Those efforts should also make clear that the larger community—which may not feel the effects of racism—is also being hurt by the problem, Jones said.

“Whether that racism is in the form of unjust police killings, or the systematic denial of access to better schools, medical care, and employment opportunities, the whole system, the whole society is being sapped of its vigor, of its brilliance, of its strength through the waste of human resources,” Jones said. “That, to me, is the most profound impact of racism.”

States the Next Front Line

Efforts to pass similar measures on public health and race at the state level have faced tougher sledding. Wisconsin Gov. Tony Evers (D) said racism was a public health crisis in June, but the state took no formal action. The Ohio House of Representatives left for summer vacation earlier this month without acting on a similar proposal.

In 2017, the New Mexico Legislature passed SB 269, which required state agencies and those receiving state funding to enact policies that reduce institutional racism. The measure required state agencies to study race and gender differences in hiring, pay, and promotions, and develop plans to correct discrepancies. It also required anti-racism training for state employees and mandated annual updates on those efforts to lawmakers.

“This concept has been around for over 10 or 15 years. But that was the first time that it actually passed,” said state Rep. Javier Martinez, an Albuquerque Democrat who co-sponsored the legislation. But the measure was vetoed in March 2017 by then Gov. Susana Martinez (R), who questioned the need for the measure.

The proposal was reintroduced as SB 7 during a 5-day special session of the Legislature in June, but it wasn’t acted on. Instead, lawmakers passed legislation creating an advisory council for racial justice that will monitor state agencies’ efforts to end institutional racism. The council will submit a report to lawmakers in November that will inform future proposals.

Martinez said he expects to reintroduce the legislation in January 2021. He said Covid-19’s severe impact on Latinos and Native Americans in New Mexico may help the bill’s chances.

“It’s given us a real life example that we can present to our colleagues and to the public as to why we have to address these issues,” Martinez said.