An employee picks up a Juul Labs Inc. device kit for a customer at a store in San Francisco, Calif., on June 26, 2019.
Photographer: David Paul Morris/Bloomberg

reached an agreement in principle to pay $438.5 million to 33 states to resolve a two-year into the e-cigarette manufacturer’s marketing and sales practices, particularly claims that it marketed addictive nicotine products to children.

The accord, which also includes Puerto Rico, would force Juul to comply with a series of “strict injunctive terms severely limiting their marketing and sales practices,” Connecticut Attorney General , who led the negotiations with Texas and Oregon, said Tuesday in a statement.

Under the deal, Juul will refrain from all youth marketing, paid product placement, advertising on public transportation, funding education programs, depicting anyone under 35 years old in advertisement or using cartoons in ads, among other marketing activities, according to the statement. Juul also agreed not to advertise on billboards or use paid influencers to promote products. 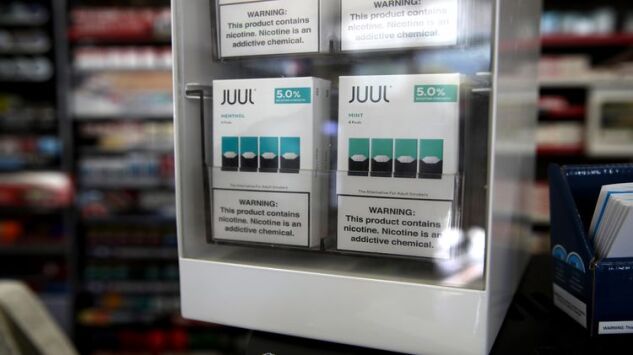 “Juul’s cynically calculated advertising campaigns created a new generation of nicotine addicts,” Tong said in the statement. “They relentlessly marketed vaping products to underage youth, manipulated their chemical composition to be palatable to inexperienced users, employed an inadequate age verification process, and misled consumers about the nicotine content and addictiveness of its products.”

Juul said in a statement that the settlement is a “significant part of our ongoing commitment to resolve issues from the past,” adding that the terms of the deal are already in alignment with its current business practices.

“We remain focused on the future as we work to fulfill our mission to transition adult smokers away from cigarettes -- the number one cause of preventable death -- while combating underage use,” the company said.

The agreement follows some earlier deals with individual states. Juul in April a $22.5 million settlement with Washington state over claims that it unlawfully targeted underage consumers. North Carolina struck a $40 million with Juul in 2021 over how the company markets products to underage users. Seperate lawsuits by New York and California are still pending.

The FDA in June Juul products on US shelves, citing a lack of evidence demonstrating their overall safety. The regulator also noted Juul’s “disproportionate role in the rise in youth vaping.”

Juul won a temporarily blocking that decision, and the agency separately stayed its ban, allowing the company to continue selling products for now. A ban would wipe out a substantial portion of Juul’s revenue, and the company has been options including new financing and a potential bankruptcy filing if that happens.

Texas Attorney General said in a statement that his state will receive nearly $43 million under the deal.

“My commitment to protecting consumers from deceptive business practices is unwavering, and any company that misleads Texans, especially our youth, will be held accountable for their actions,” Paxton said.

The multistate investigation revealed that Juul became the dominant player in the vaping market by deploying an advertising campaign that appealed to youth, according to the statement.

“The investigation found that Juul relentlessly marketed to underage users with launch parties, advertisements using young and trendy-looking models, social media posts and free samples even though its e-cigarettes,” according to the statement.

Juul still faces more than 2,500 personal injury lawsuits and hundreds more cases brought by local governments and school districts seeking to hold the company responsible for underage vaping. Experts estimate that Juul could potentially face hundreds of millions of dollars in damages from those claims.

The first trial among these cases, which involves claims by the San Francisco Unified School District, is set for November.

(Updates to add lawsuits against Juul by individuals, local governments and school districts.)