A federal judge Tuesday will consider whether to release hundreds of patients from California’s largest psychiatric hospital due to soaring Covid-19 rates, a move state health officials say would put the public at risk.

Lawyers for patients of Patton State Hospital in San Bernardino used the state’s own words against it in a court filing last week to argue for the release, quoting a separate case in which a California Department of State Hospitals official said the state’s psychiatric facilities have “exquisite and unique vulnerabilities” when it comes to the virus.

“Even simple public health measures like social distancing, cough covering [and] hand washing, is difficult in our population because we are psychiatric facilities,” said Katherine Warburton, medical director of DSH in October testimony in Coleman v. Newsom, a case in which DSH is seeking to avoid accepting new patients from California state prisons.

DSH is in an unusual and difficult position—arguing that Patton is safe enough from Covid-19 to keep the patients it currently has, yet too dangerous to take on any more from state prisons that are also bursting at the seams. The situation mirrors logistical tensions playing out at facilities in other states.

Judge Jesus G. Bernal, of U.S. District Court for the Central District of California, will hear from both sides in Hart v. Clendenin on a motion by DSH to stay the case and motions by plaintiffs to certify a class of patients at Patton and for a temporary restraining order that would release up to half of the patient population. 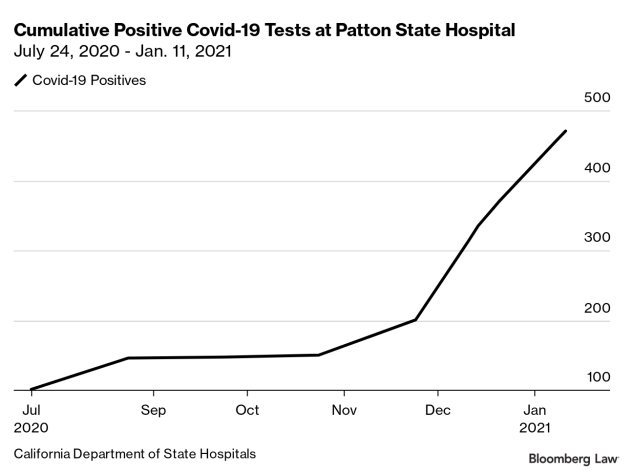 Reality on the Ground

Advocacy group Disability Rights California initially filed the class action in August against the operators of the hospital and the director of the California Department of State Hospitals.

Recent filings were in response to a new surge in patient infections at Patton, a 1,527-bed facility. Cumulative Covid-19 cases rose from 151 on Oct. 24 to 471 as of Jan. 11, according to state data. Some 14 patients have died from the disease and conditions worry staff as well as patients.

“The situation at Patton is extremely serious,” said Sylvia Hernandez, chapter president of the California Association of Psychiatric Technicians for Patton. “One unit alone had six staff members and 24 patients test positive.”

Citing a “staffing crisis,” Hernandez and other union officials said the administration has mandated that clinical teams take on an additional weekend evening shift to care for patients.

“Staff are being forced to work double shifts and in some cases in excess of 16 hours in a day, multiple mandatory overtime shifts in a week, and are working to exhaustion,” said Coby Pizzotti, a lobbyist and consultant for the union.

“They are burned out and afraid that they will not be able to provide appropriate patient care,” he added.

Multiple patients have expressed fear about the conditions in interviews with Bloomberg Law.

“I’ve been diabetic for 12 years, and if I get sick I can die from it,” said Jose Marin, who was found not guilty by reason of insanity in an arson case 10 years ago.

Warburton’s testimony reveals the challenges that Patton’s staff are dealing with.

“We can’t ask or tell patients to stay in their room or stay anywhere on the unit for that matter,” Warburton said in her testimony. “That’s considered seclusion and can only be used when there’s an imminent risk or a threat. So, it’s very difficult to manage any type of public health measure that’s reliant upon patient behavior and/or environmental safeguards.”

Agency officials said they recognize “the inherent risk of Covid-19 in large congregate settings,” including the “difficulty getting patients with significant mental illness to comply with hygiene and social distancing, and the challenge in implementing infection control procedures.”

“Acknowledging these risks does not run counter to the department’s policy of avoiding unsafe admissions and unsafe or unnecessary releases,” DSH spokesman Ken August said in a statement provided to Bloomberg Law.

“Defendants clearly know, and have known for months, that there is a significant danger to patients coming into their facilities because of Covid,” said Anne Hadreas, lead attorney representing the patients. “Now they need to act, in every reasonable way possible, to protect the patients that are already there.”

The facility continues to house roughly 50 patients per unit during the pandemic, with many sharing rooms, California officials confirmed.

DSH has emphasized the broad safety precautions officials have taken to limit the spread of contagious disease, including efforts to vaccinate some patients and staff.

In a document filed Jan. 4 in the Patton case, DSH contends that it activated emergency response measures “to ensure a coordinated, system-wide response to Covid-19.”

DSH isn’t only leaning on its safety efforts at Patton in its opposition to releasing hundreds of patients from the facility.

Officials say patients are too dangerous to be released from a state hospital and that the agency doesn’t have the authority to do so even if it wanted to.

Patient advocates also said that most crimes committed by patients occurred many years ago, and that many patients remain in Patton despite being cleared for discharge to less restrictive settings. But state officials remain unconvinced.

Granting Disability Rights of California’s request for a 50% reduction in population would result “in the release, to the streets, of roughly 600 of the seriously mentally ill patients currently undergoing court-ordered treatment at DSH-Patton,” according to the state’s Jan. 5 filings.