Pricey medicines from companies such as Johnson & Johnson and Merck are likely to face government negotiations in coming years, according to a Bloomberg Government analysis of Medicare data.

Sweeping legislation () to empower the government to demand lower prices on some of the costliest drugs to Medicare could reach President Joe Biden’s desk by this weekend. Drugs that have been on the market for years and reap billions of dollars in sales from Medicare alone are poised to be on deck.

“These are blockbuster, high revenue products that have made a lot of money for their manufacturer,” Benjamin N. Rome, a researcher who studies drug pricing at Brigham and Women’s Hospital in Boston, said.

The budget reconciliation bill would direct Medicare to pick 10 drugs from a list of the most-expensive medicines—ranked by total cost—to be subject to negotiations, a process meant to establish a maximum price for these products. Medicare would start this process in 2023 but the prices would first take effect in 2026.

Drugs that have a generic or biosimliar competitor would be exempt. Small molecule drugs—which make up most medicines on the market today—are exempt from this process until nine years after their approval date, and biologics—more complex medicines—are exempt from this process until 13 years after their approval date, counting from the time when negotiated prices go into effect.

The negotiation provisions of the bill would reduce government spending by more than $101 billion, according to a Congressional Budget Office analysis. This reduction in spending would come from Medicare paying less for medicines.

Bloomberg Government identified 10 drugs each from Medicare Part B—which covers physician-administered drugs—and Medicare Part D—the prescription benefit—that likely face negotiation, but the decision about which drugs will be selected will be left up to federal officials. The list of eligible products is subject to change. 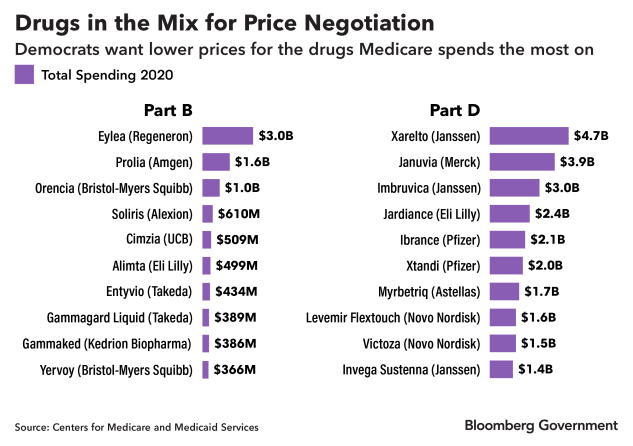 “CMS is monitoring the progress of the bill. As with any other piece of legislation, we will review and share information when it’s available, should it be signed into law,” an agency spokesperson told Bloomberg Law in an email Friday.

“At this time, we do not have certainty about which medicines could be immediately impacted,” Pfizer Inc. said.

Yet analyses of Medicare’s spending on drugs—and the high cost of some—point to some clues on which ones could be in regulators’ crosshairs and might ultimately affect drugmakers’ bottom lines.

For example, Astellas could face as much as a 14% revenue squeeze if prostate cancer drug Xtandi and overactive bladder drug Myrbetriq are subject to government price cuts in 2026, according to a Bloomberg Intelligence analysis. “A cut to Bristol’s Eliquis may amount to a 9% top-line hit,” Bloomberg Intelligence found.

“Astellas is analyzing the language to assess potential impact on our business and our ability to deliver value to patients,” the company said in an emailed statement.

“The nebulous nature of several of the provisions make it difficult to definitively determine potential impact. Broadly speaking, it has been well documented that government price-setting policies inhibit R&D and reduce patient access to medicines,” it said.

Astellas added that if the bill is enacted, it will work to ensure its ability “to develop and deliver products of value to patients is disrupted as little as possible.”

“We believe negotiation will significantly impact how innovators approach important areas of high unmet need because it disincentivizes the substantial research and development effort that happens after a first approval,” Alexion CEO Marc Dunoyer said in an emailed statement.

“Instead of addressing the misaligned incentives in the system so that the market can work better, the current legislation puts a new bureaucratic process between patients and the life-saving medicines they need. Should it become enacted, we will determine impact on our business and the patients we serve when we see the final language and specifics from the Administration,” it said.

A spokesperson for Bristol Myers Squibb said it will take time to evaluate the impact of these policies fully but remains concerned “by the impact government price setting will have on investment in clinical research and future innovation for patients.”

Amgen said Wednesday the company wouldn’t comment at this time as the House is considering the bill. Eli Lilly & Co. declined to comment.

(Updates Aug. 11 story with comment from the Medicare agency in the ninth paragraph.)