Analysts expect health-care deals to have a huge December despite uncertainty about how the rapidly spreading omicron coronavirus variant will affect the U.S. pandemic recovery.
Angus Mordant/Bloomberg

Health-care dealmaking kept up a brisk pace in November, setting up what could be a blockbuster December and a record-breaking year, attorneys and analysts say.

The number of deals announced and closed in November reached 236, up from 223 in October and 213 in September, said Gary Herschman of Epstein, Becker & Green in Newark.

“Due to the volume of deals planning to close by year end, we expect that December activity will more than double November’s activity,” Herschman said.

The vigorous pace is likely to continue into 2022, despite uncertainty around prospects for congressional passage of President Joe Biden’s large social spending initiative and the omicron variant’s impact on Covid-19 pandemic recovery, said Larry Kocot of KPMG in Washington.

“This uncertainty and changing dynamic is unlikely to keep investors on the sidelines, as the appetite for deals seems insatiable and investors are taking the longer view as we all look ahead to 2022,” Kocot said.

KPMG in Washington and FocalPoint Partners of Chicago prepared the curated year-to-date list and list of select November transactions for Bloomberg Law. 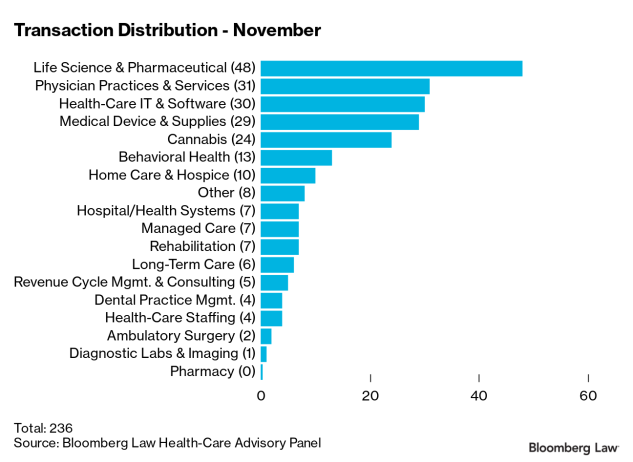 Life sciences and pharmaceuticals is on pace to have more than 500 announced and closed deals by the end of December, compared to 337 for last year, said Kocot.

The current transactions volume for the sector—at 478—far exceeds health IT and software, which has the next highest deal volume at 378, he said.

Investor interest is expected to remain high over the coming months as booster vaccines and more therapeutics come to market, Kocot said.

“In addition, a growing number of pharmaceutical companies appear to be poised to reinvest capital that will likely help fuel even more deal activity within the sector,” he said. 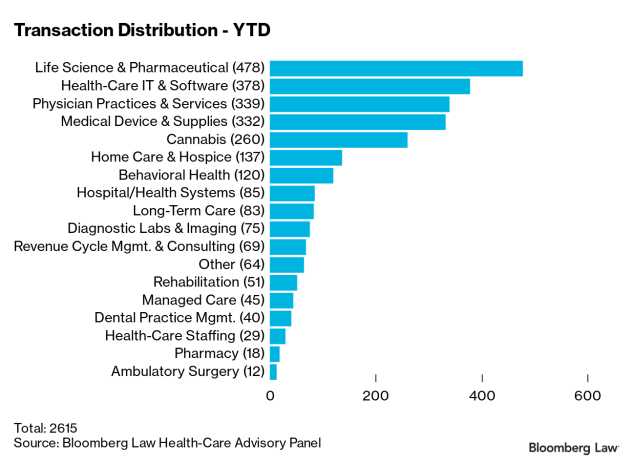 Physician practices and services activity dipped slightly in November, with 31 deals closed or announced in the month, down from 36 in October but up from 24 in November 2020, said Hector Torres of FocalPoint Partners in Chicago.

But December’s total could reach 75—a swift pace that should continue well into 2022, Torres said.

“It wouldn’t surprise us to see even more robust volumes in this sector through the next 6-12 months as the trend towards consolidations in this sector is snowballing at a fast pace,” he said.

One deal of note was the acquisition of The Oncology Institute, one of the largest community oncology practices in the U.S., by DFP Healthcare, a special-purpose acquisition vehicle sponsored by health-care venture capital firm Deerfield Management.

The Oncology Institute acquired Westlake Facility, a group of oncology practices based in California, Torres said. With the acquisition, the group has over 80 physicians across more than 50 locations.

Health IT in Demand

Activity in the health IT sector continued at a high level in November, as consumer demand increased for “no-touch solutions” in health care, said Anjana Patel of Epstein, Becker & Green.

“Companies know they need to innovate to meet the market’s demands and to remain competitive, and this has driven up the demand for infusions of capital from interested buyers,” she said.

The most important November transaction in the health IT sector was the acquisition of Athenahealth, the largest provider of cloud-based physician practice solutions in the U.S., by private equity firms Bain Capital and Hellman & Friedman, Torres said.

The firms will pay $17 billion to current owners Veritas Capital and Evergreen Coast Capital, which paid $5.7 billion for Athenahealth in 2019.

Athenahealth partners with more than 140,000 care providers across 120 specialties in all 50 states. The deal is expected to close in the first quarter of 2022.

The number of deals will likely increase in 2022 despite the lack of movement at the federal level towards regulatory changes, he said.

“Lenders seem to have become more comfortable with the prospects and future financial sustainability of cannabis businesses, which has translated in the availability of more financing,” he said. “And that, in turn, has increased interest from investors, leading to more deals and more consolidation as investors look to scale up to keep up with fierce competition.”