The first half of 2018 saw a strong wave of M&A and deal making activity across nearly all sectors of the U.S. healthcare industry. The second half of 2018 likely will be just as robust.

The continued buoyancy of the healthcare M&A environment in the first half of 2018 is further validated by the lack of deal-making seasonality. Even though the summer months typically tend to be slower in terms of the volume and velocity of overall deal-making, 71.0 percent of the 530 announced and/or closed transactions for the first half of 2018 were completed in the months of April, May, and June, thus highlighting the resiliency and motivation of both buyers and sellers. 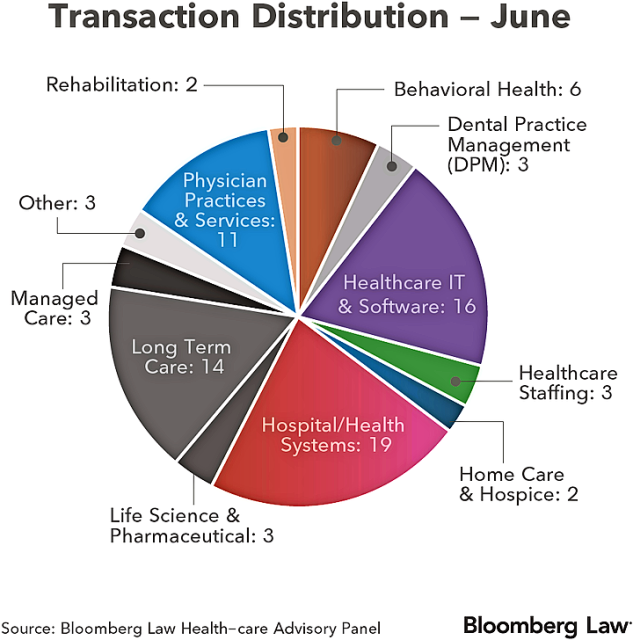 Robust M&A activity in the hospital/health system sector is expected to continue for the foreseeable future, driven by structural changes such as the shift from the inpatient to outpatient setting, and the ongoing trend towards value-based care, driving large hospitals/health systems across the size/scale spectrum to adapt to new payer demands. As such, the larger health systems have embarked on a consolidation strategy to have the scale needed to adapt to those payer demands, coupled with willing-and-able sellers primarily comprised of smaller-to-regional systems presently struggling with declining margins and an increased need for strategic capital.

Private equity firm investment in the physician group sector has been a key catalyst to continued consolidation of both the dermatology and ophthalmology sectors, as legacy sub-specialty platform investments continue to pursue growth through consolidation strategies on both a regional and national basis.

One trend to keep an eye on as the second half of the year plays out is the involvement of private equity in the provider space. Private equity funds are currently sitting on a record $1 trillion in “dry powder,” or stockpiles of investable cash, and must eventually put that cash to work to generate returns for their limited partners. As such, these private equity firms have contributed to the rise in transaction valuation multiples and associated metrics, which at a certain point begin to outprice strategic buyers who must weigh the integration cost in their transactions.

Hospital/health system M&A activity in June, as the list for that month shows, delivered a flurry of deals, further solidifying what is shaping up to be yet another record year for the sector from a deal activity perspective. The seasonal aspect of this increasing M&A activity is also important to note, given that typically there is a moderation in the number of both closed and/or announced deals in the summer months. June’s activity saw 19 transactions either announced or closed, a slight increase from the 15 deals announced or closed in the prior month. While June’s transaction total fell closer in line with the average of 17 deals per month seen in the January through May 2018 period, June’s hospital/health system M&A transactional volume (19 announced and/or closed transactions) was higher relative to the average of 10 announced and/or closed transactions per month witnessed in the fiscal year 2017 period, thus further solidifying the consolidation trend that has defined the sector in 2018.

Hospital/health system M&A activity likely will remain at steady, yet healthy levels for the second half of 2018. The summer months typically result in a lull for activity as senior executives are in and out of the office. However, the second half of the year, especially the final quarter when executives are attempting to wrap up outstanding deals before year-end, should prove to be highly active for the sector. Additionally, as health systems continue to refine their overall care delivery platform, we should continue to see divestment of non-core ancillary assets (labs, imaging, etc.) continue through the second half of the year as well.

One notable trend that observers in the hospital/health system M&A market should keep their eye on for the remainder of the year is the continued divesture of assets from Community Health Systems, Inc. (CHS). The for-profit publicly traded health system, challenged by a mounting debt burden and decreasing revenues, continues its asset selloff strategy with no end in sight. During the month of June, CHS closed or announced the sale of six hospitals.

CHS closed on the sale of three hospitals to West Tennessee Healthcare, previously announced in March. Rennova Health purchased what is now named Jamestown Regional Medical Center for approximately $1.1 million, effective June 1, 2018. Finally, the sale of Byrd Regional Hospital to Allegiance Health Management was completed June 1, 2018. In terms of announced deals, CHS agreed to sell AllianceHealth Deaconess hospital in Oklahoma City to INTEGRIS Health, Inc. CHS is expected to continue being an active seller in this hot M&A market, as outstanding debt payments come due and buyers remain on the lookout for opportunities to expand their regional footprint and organizational scale. 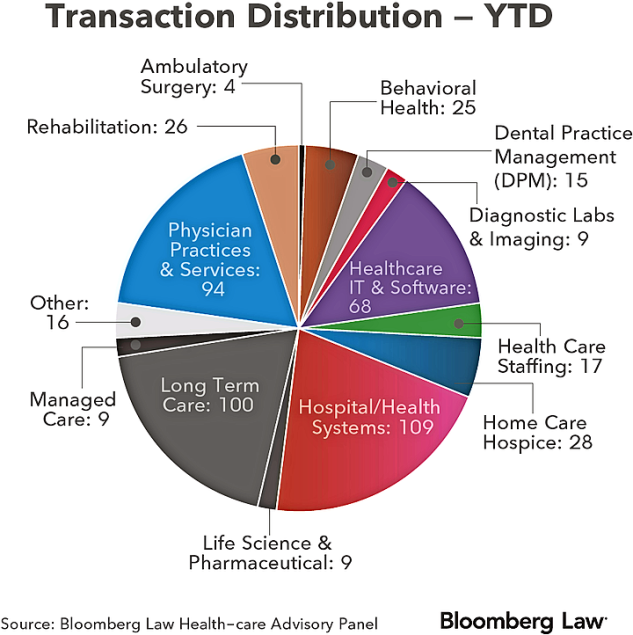 Other notable transactional activity in June included several academic medical centers (AMC’s). Of the 18 transactions announced or closed during the month, four involved AMC’s. Somerset Hospital announced its intent to affiliate with the University of Pittsburgh Medical Center on June 30, 2018. In another announced affiliation on June 26, 2018, Oktibbeha County Hospital Regional Medical Center announced its intent to join the University of Mississippi Medical Center. Finally, Northwestern Medicine announced on June 12, 2018 that Centegra Health System agreed to affiliate with Northwestern and is expected to complete the integration by September 1, 2018. The uptick in academic health center and independent hospital partnerships stems from the co-branding and name recognition appeal to the independent operators, in addition to the associated research grants and improved physician recruitment from AMC affiliations.

Rounding out noteworthy deals in the month of June was the announcement between Summit Health and WellSpan Health. This deal is a prime example of health systems wanting a larger piece of their respective geographic region, as the combination of Summit and WellSpan would allow greater coverage across Central Pennsylvania and within Franklin County. The ability to touch more lives across a given geography will allow the newly integrated system to be more effective in addressing payor requirements and provide improved patient service and access across the region. Additionally, the combination of these two health systems will have a trickledown effect, leading to improved physician retention and expense management through economies of scale.

The long-term care sector has been red-hot throughout the year, as an aging population drives more volume to related facilities. In addition, with recent changes to the Medicare payment model, long-term care facilities have had to focus on improving operational efficiencies, with improved economies of scale being a result from effective merger integration.

Other transactions in the behavioral space involved the acquisition by Castlewood Treatment Centers, an eating disorder treatment provider, of five locations from La Ventana Eating Disorder Programs; and the purchase by Family Treatment Network, a portfolio company of Pharos Capital Group, LLC, of the CCMC school, an affiliate of Connecticut Children’s Medical Center. According to its website, “CCMC School provides comprehensive special education for students ages 5 to 21 who require intensive intervention due to severe emotional, behavioral, cognitive, developmental and/or learning challenges.

With the influx of capital from financial sponsors, the physician practice sector has seen a surge in M&A activity thus far in 2018. With 94 closed or announced deals through June, compared to 65 at this time last year, the physician sector is poised to continue its robust activity into the second half of the year. The physician services sector continues to be one of the most highly consolidated spaces in the broader healthcare industry. Specialties such as ophthalmology and dermatology remain red hot, while new specialties such as urology and OB/GYN have picked up steam with Chesapeake acquiring Peninsula Urology and Advantia Health acquiring Fairfax OB/GYN Associates, respectively. Private equity continues to be a main driver of consolidation in the space with most of transactions in June involving a platform or add-on investment by a financial sponsor.

Specialties such as ophthalmology and dermatology, in particular, offer a multitude of ancillary services allow return-driven private equity buyers to capitalize on their initial investment. Additionally, independent physician groups across the country are realizing the benefits of investments from health systems, strategic buyers and private equity. Principally, consolidating back office functions and having increased capital to invest in information technology, value based care capabilities and new patient driven technology permits physicians to focus their attention on patient care and outcomes.

The most notable transaction in June was the $9.9 billion buyout of publicly traded healthcare services provider, Envision Healthcare, by Kohlberg Kravis & Roberts. This transaction was announced only two years after Envision’s merger with Amsurg Corp. With KKR’s partnership, healthcare investment bankers expect that both: (1) the now privately held Envision will benefit from the dry powder of one of the world’s most accomplished private equity funds and escape the regulatory burdens associated with trading as a public company; and (2) this partnership will look to pursue an aggressive mergers and acquisitions strategy to build the Envision platform even further.

Amazon’s much anticipated “concrete” entry into the health-care realm was announced in late June with its acquisition of New Hampshire-based PillPack for approximately $1 billion. The announcement, though predicted by many, marks the first significant acquisition by Amazon in the healthcare space, in addition to its less publicized and growing presence in the durable medical equipment sector. As a result of this acquisition, the “Amazon Effect” could introduce downward pricing pressure on specialty drug distributors. Industry analysts pointed out that Walgreens, CVS, and Rite-Aid, three of the largest pharmacy providers in the U.S., lost over $10 billion in value in the public markets after Amazon’s announcement to acquire PillPack, indicating that even the largest distributors must adapt. This transaction points to further consolidation within the pharmacy distribution market as industry participants aggressively position themselves to compete with Amazon.

The expectation is Amazon will look to expand into additional healthcare verticals through similar acquisition strategies. While Amazon’s broader healthcare strategy remains largely unknown, it can be assumed that one of the largest stories leading into the latter half of 2018 will be what impact they will have on the future of healthcare.