Compared to the 299 recorded deals in the same period last year, 2018 remains on track to be an extraordinarily active year for healthcare transactions. Seemingly undeterred by the approaching mid-term elections, the pace of deals in 2018 continues to trounce the 167 deals noted in the third quarter of 2016, the most recent general election year.

The most active sectors for M&A activity within the healthcare industry are: Long-Term Care, Home Health, Hospitals & Health Systems, Physician Services and Healthcare IT.

The long-term care sector continues to consolidate, as evidenced by 69 long-term care transactions being announced or closed during the third quarter, the most of any healthcare segment tracked by investment bankers. 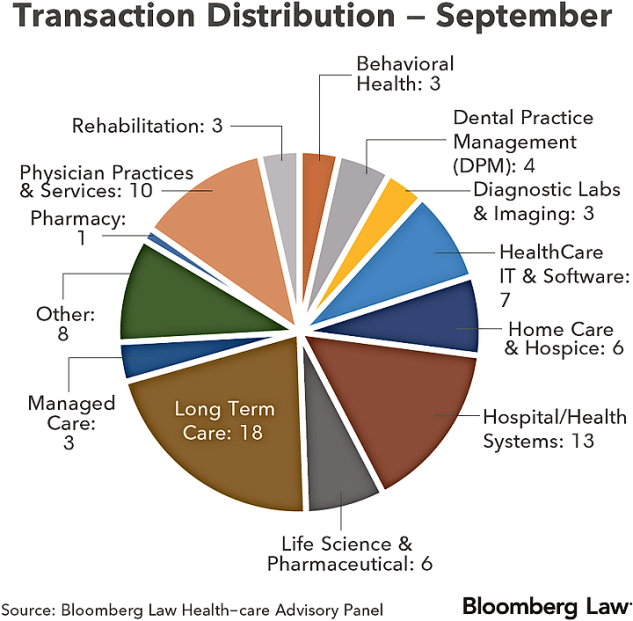 The activity in this sector continues to soar, driven in large part by a number of factors including: (i) the ongoing health industry transformation to providing care in the most cost-effective setting (with long term care facilities being less costly than hospitals); (ii) the aging of the population (as baby boomers age into their 70s, 80s and beyond); (iii) pressure to reduce healthcare costs by limiting readmissions to hospitals and improving the quality of care provided; and (iv) significant financing provided by REITs, private equity firms and well-funded healthcare systems seeking to capitalize on this growing sector.

YTD volume has now reached 169 announced/closed transactions, including the 19 in September, which is right in line with 2017’s YTD total of 169. The consistent activity in this sector is highlighted by the facts stated above, and activity in the final quarter of 2018 will likely result in the long-term care sector meeting or exceeded the pace of transactions seen during 2017.

In one notable transaction during the quarter, ProMedica acquired HCR ManorCare, the second largest provider of post-acute services and long-term care in the nation, for $4.4 billion. Welltower, a real estate investment trust, participated in the transaction by acquiring a majority interest in the real estate held by HCR ManorCare. With the addition of HCR ManorCare, ProMedica is said to become a $7 billion health network with 70,000 employees in 30 states.

For many of the same reasons, the Home Health sector (including hospice) is quickly gaining momentum, as illustrated by 6 deals during September, and 22 deals in the third quarter.

Notably, Home Health is even more cost-effective than caring for elderly in a nursing home or assisted living facility, and many elderly baby boomers (in their 80s and beyond) are resisting care in facilities/institutions, but rather desire to receive care their homes, including end of life care.

In light of these factors, and the fact that home health and hospice organizations are becoming key components of any integrated delivery system, it is likely that investor interest in the Home Health space will likely continue to heighten during the remainder of this year and throughout 2019. 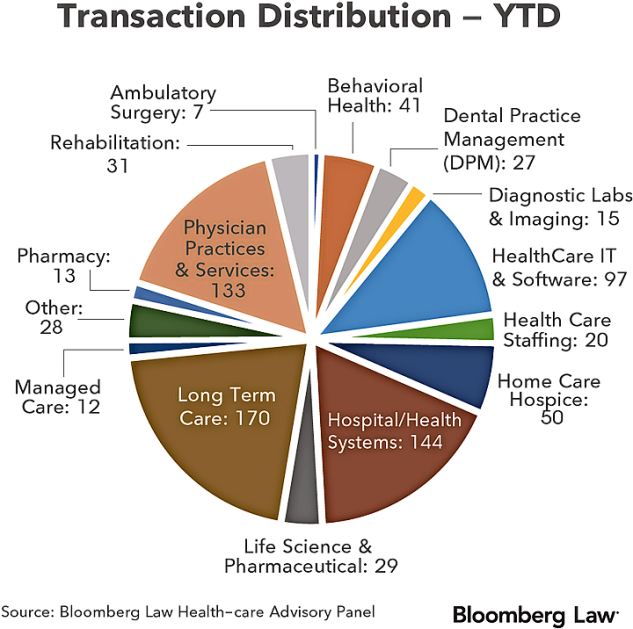 The large volume of transactions this year has been influenced, in part, by the continued pressure from payors. As a result, many hospitals and systems are seeking to further consolidate in strategic geographies.

HCA has demonstrated why it is widely considered to be the best-in-class for-profit hospital operator, as they have successfully strengthened their markets and broadened the reach of their system again this year. September included the acquisition of North Cypress Medical Center, furthering HCA’s broader presence in Texas, more specifically in Houston. In addition, HCA announced plans to enhance and improve the relationship between Tampa Community Hospital and Memorial Hospital in Tampa by mid-November.

Given its deep bench of management talent and well-defined strategy, HCA remains in position to further bolster its position as the for-profit hospital provider of choice even after the retirement of Milton Johnson as the system’s CEO.

In September, for example, Einstein Healthcare Network and Jefferson (Philadelphia University + Thomas Jefferson University) announced that they have executed a definitive merger agreement. Earlier in September, Bon Secours Health System and Mercy Health consummated their merger, thereby establishing one of the largest Catholic healthcare systems in the nation with 43 hospitals in seven states and more than 2,100 physicians. The combined organization, Bon Secours Mercy Health, will have approximately $8 billion in net operating revenue. (And early in October, Baylor Scott & White announced that it will merge with Memorial Hermann, which combined will have 68 hospitals and 1100 care sites throughout Texas).

In August, HCA Healthcare and Mission Health entered into a definitive agreement for HCA to acquire Mission Health for approximately $1.5 billion. In addition, HCA committed to spend an additional $430 to, among other things, complete the Mission Hospital for Advanced Medicine, and build a replacement hospital for Angel Medical Center and a new Behavioral Health hospital.

And, in late July, Apollo Global Management and LifePoint Health announced a definitive agreement that will, if consummated, combine LifePoint with RCCH HealthCare Partners, a health system already owned by Apollo. On a combined basis, LifePoint and RCCH will operate 84 hospitals with expected revenues of more than $8 billion. Apollo agreed to pay $5.6 billion for LifePoint.

With the announcement during the quarter by Sioux Falls, S.D.-based Sanford Health, that it is “on track” to announce the acquisition of a $1 billion health system in Chicago by the end of 2018, together with other very significant transactions between health systems that are in process, it seems clear that the coupling among systems will continue at pace, if not accelerate, for the balance of 2018 into 2019.

On October 1, 2018, Baylor Scott & White Health and Memorial Hermann Health System announced their letter of intent to merge. The combined organization, if the transaction is completed, will become the largest healthcare provider in the State of Texas, will include 68 hospitals and over 73,000 employees across 30 counties in the state.

This partnership exemplifies the trend of health systems that already had significant market share in their primary and secondary services areas continuing to seek growth via strategic transactions with other large regional providers to increase regional scale.

Recent, comparable combinations include the merger between Advocate Health System and Aurora Health comprising 27 hospitals in the Chicago and southern Wisconsin regions, as well as the Bon Secours Health System/Mercy Health comprising 43 hospitals across seven states east of the Mississippi. The still fragmented hospital sector will likely witness continued consolidation as providers work to build scale, whether on a regional or national basis.

With 38 transactions announced or closed during the quarter (compared to the 39 announced or closed during the previous quarter), physician practice consolidation continues the heightened pace we have seen for the majority of 2018. Industry advisors expect that this already strong activity will gain in strength in the coming months and through 2019.

This continually growing interest in physician services is due to a number of factors, including: (i) the need for substantial capital to invest in advanced EMR and data analytics, to enable them to better succeed in clinical integration and population health initiatives, and thereby better compete in the changing value-based marketplace; (ii) the desire to expand through acquisitions, de novo growth and the addition of new and supplemental ancillary services (e.g., ASCs, lab, therapy, infusion, DME, etc.); and (iii) the competitive benefits of professional and centralized management teams to help navigate the industry changes and strategically position themselves, including gaining the expertise of C-suite executives such as CEOs, COOs, CFOs, HR departments, and managed care experts.

Dermatology remains one of the most highly sought after specialties. With the mix of commercial payors and self-pay, cosmetic procedures, the specialty has been the darling of private equity investors. Private equity funds have continually looked to partner with strong physician ‘platforms’ and execute on a number of regional and national ‘add-on’ acquisitions. Most notably, seasoned healthcare investor BelHealth Investment Partners acquired 4 dermatology practices in the New York/New Jersey area under their NavaDerm Partners platform.

While dermatology and ophthalmology continue to see a considerable amount of invested capital flood in, several other specialties saw an increase in investment, reaffirming that sponsors are looking to replicate past physician practice successes in new specialties. Areas such as OB/GYN, Gastroenterology, and most notably Orthopedics and Urology are experiencing an uptick in interest from the private equity community. Driven by the many parallels to highly consolidated specialties, these fragmented sectors will likely see the bulk of ‘platform’ investments from private equity funds during the next 12 – 24 months.

In September, Urology saw only its second private equity investment in the space when J.W. Childs Associates acquired New Jersey Urology (the result of a merger between Delaware Value Urology and New Jersey Urology). While the space has seen a significant uptick in interest from financial sponsors, investments into the space have been slower than previously expected. Industry experts expect that a number of additional acquisitions will take place in the urology space over the next year.

With 30 transactions announced or closed in the third quarter the healthcare industry continues to turn to information technology (IT) to drive innovation, track care and patient data – all in order to better facilitate and accelerate the holy grail of effective clinical integration and population health management. Given the promise (and expectations of) Healthcare IT, broad-based investment in IT systems and platforms geared towards achieving these objectives and capabilities will continue at a fast pace.

The attraction of healthcare IT is not limited to traditional healthcare players. For example, in August, consumer products company Best Buy paid approximately $800 million to acquire GreatCall from GTCR. GreatCall, a digital health company that began by safety-focused phones for seniors, today offers an array of monitored safety devices that allow people to age in place while staying connected.

Another company, WebMD, has been extremely active of late. In July, the company announced a deal with China’s Tencent to introduce its health information platform to Asia. In August, WebMD announced an agreement to acquire the Vitals Consumer Services Division of Mdx Medical. This division, focused on providing consumers with online tools to connect to clinicians, is comprised of web properties vitals.com and UCompareHealthCare.com. WebMD believes that this acquisition will lead to 10 million unique consumer visits to its platform per month.

Based on the consistent transaction trends in the healthcare industry over the last several years, and an assessment of recent activity, deal volume likely will continue at the same or faster pace during the 4th quarter of this year and through 2019 (or beyond). Moreover, experts confidently predict that healthcare will reach 20% of our nation’s GDP in just a few short years.

As a result of these clear factors and trends, the healthcare industry will continue to attract substantial investment and undergo greater consolidation, all with goal of building forward-thinking organizations with size and scale, that are clinically integrated across the continuum of care, and that cost-effectively manage the health of populations.