As businesses emerge from the economic crisis brought on by Covid-19, there may be increased risk that employees may cross the line and engage in anti-competitive conduct with competitors.

History has shown that severe recessions are followed by increased antitrust cartel enforcement. And given the current economic climate, the incentives to engage in potentially unlawful antitrust conduct may be higher than ever.

It’s critical that companies prepare now to ensure that antitrust compliance and, if necessary, reporting of conduct is strongly encouraged.

Agreements with competitors to fix prices, rig bids, or allocate customers or territories are illegal under federal and state antitrust laws. Economic downturns may tempt sales and marketing personnel or other business executives to turn to collusive conduct to bolster business—especially in a distressed industry. But, unlawful coordination with competitors can subject a company and its executives to severe criminal fines and other penalties—including jail time.

Past recessions demonstrate aggressive cartel enforcement in the years following an economic downturn. Following the dot-com crash in the early 2000s, the Department of Justice’s Antitrust Division filed criminal antitrust cases in a multitude of industries, including:

From 2000 to 2003, the average prison sentence of executives charged with antitrust offenses doubled from 10 months to 21 months.

Cartel enforcement similarly increased following the Great Recession. In the five years following the 2008 financial crash, the DOJ filed 60% more criminal cases (339) than the prior five-year period. Further, nearly 40% more individuals were sentenced to prison each year for terms that averaged 25% longer than prior years. An average of 29 individuals were sentenced to prison each year from 2010 to 2014, compared to 21 from 2000 to 2009 and just 10 from 1990 to 1999. The average prison term during those same periods increased to 25 months up from 20 months and 8 months, respectively.

The total criminal penalties also substantially increased, with the DOJ assessing fines of $1 billion or more each year from 2012 to 2015. 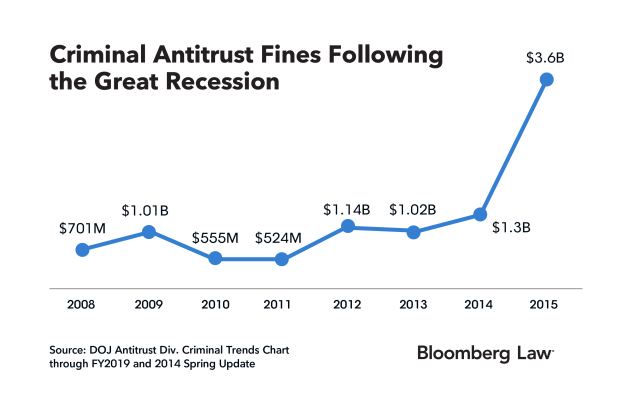 The major investigations that erupted following the 2008 financial crisis affected many industries:

The current economic crisis is unlikely to be any different. U.S. antitrust regulators have vowed to vigilantly enforce antitrust laws.

What Can You Do to Minimize Risk?

Given mounting pressures on business personnel to alleviate financial stress, it is critical that companies ensure a robust antitrust compliance program is in place to educate employees about unlawful antitrust conduct and timely detect any issues that may arise.

Companies should take affirmative steps to mitigate risk by emphasizing best practices for antitrust compliance, including:

What Can You Do to Mitigate Potential Collusive Conduct?

Should your company engage in any actual or potential collusive conduct, it is imperative to detect and investigate such conduct quickly. The DOJ and many other major jurisdictions offer leniency programs that provide no fines and other significant benefits for a company that is the first to report cartel conduct to and cooperate with antitrust enforcers.

Investigating potential anticompetitive conduct will present challenges in the Covid-19 world. Best practices for maintaining the health and safety of clients and counsel may dictate new methods of performing internal investigations—especially interviewing employees. It is important that companies have protocols in place to handle investigations under these circumstances.

As the U.S. economy rebounds from Covid-19, business personnel may feel increased pressure to meet sales goals and enhance financial performance. Recent warnings from antitrust regulators and past experience, however, serve as an important reminder that despite calls to come together in times of hardship, companies must be careful not to cozy up with competitors and must be ever watchful for collusive conduct.

Lisa P. Rumin is an associate in McDermott Will & Emery’s Antitrust & Competition group and represents clients in antitrust, regulatory and litigation matters, including defending against cartel prosecutions and complex class-action antitrust litigation.