The House will vote next week on a bill to bolster Obamacare and allow the government to negotiate the price of some medicines, an election-year move by Democrats to signal their priorities on health care.

The legislation () is largely a repeat of bills the Democratic-controlled House already passed, mostly largely along party lines. It would expand the Affordable Care Act’s tax credits, entice states to expand their Medicaid programs with the promise of more federal funds, and cap what any person would pay for insurance premiums at 8.5% of their income.

The cost of these measures to the government would be offset by letting federal agencies demand drugmakers lower the prices of certain medicines, as proposed in a measure () opposed by nearly all Republicans in December.

House Energy and Commerce Committee Chairman (D-N.J.), said the bill would extend health coverage to 4 million Americans and cut what many pay for insurance.

“It’s a win-win all around,” he said at a press conference today. 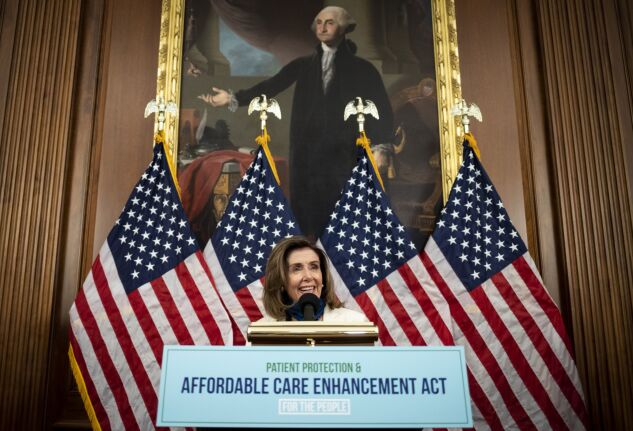 Briefs in a lawsuit challenging the constitutionality of the ACA, a challenge supported by the administration, are due at the Supreme Court Thursday, giving Democrats the opportunity to draw a contrast between their legislation and the effort to overturn the health law in the middle of a pandemic.

“It wasn’t right anytime but now it is beyond stupid,” Speaker (D-Calif.) told reporters Wednesday.

The House will hold a vote on the bill June 29, Pelosi said.

Contrast with ‘Medicare for All’

Democrats are hoping their message of strengthening Obamacare will resonate with voters ahead of the November elections, effectively rejecting calls from some progressive groups to embrace “Medicare for All” or other major expansions of government-run insurance as the answer.

Earlier this month, Rep. (D-Wash.) hosted a virtual hearing making the case that the loss of millions of jobs as a result of the pandemic, along with employer-sponsored insurance in many cases, should prompt Congress to embrace a single-payer health system.

“Covid-19 has exposed and widened the cracks in our health care system,” she said.

Jayapal is a co-chair of the Congressional Progressive Caucus and the sponsor of a Medicare for All bill ().

Still, progressives haven’t opposed previous bills with ACA proposals, including a package () passed by the House in May 2019.

To contact the editors responsible for this story: at lduggan@bgov.com; at phendrie@bgov.com