A bill to codify access to contraception passed the House Thursday, as Democrats sought to safeguard the right in response to the Supreme Court.

But the measure () is unlikely to become law after anti-abortion groups tied it to both emergency contraceptives and the abortion pill mifepristone. House Republican leadership didn’t outright whip against the measure, giving some Republicans cover to support a right to birth control.

The bill passed 228-195 — with the support of eight Republicans. Two Republicans voted present.

“The conflation of emergency contraceptives and IUDs is the tip of the iceberg on attacks on birth control,” Mara Gandal-Powers, direct of birth control access at the National Women’s Law Center, said, referring to the birth control intrauterine devices.

The legislation is part of a series of bills meant largely to get lawmakers on the record on thorny issues related to pregnancy and abortion, Democratic leaders say. House Speaker (D-Calif.) told reporters Wednesday she wanted Republicans to join on the bill, but warned “we will remember in November” if they don’t. 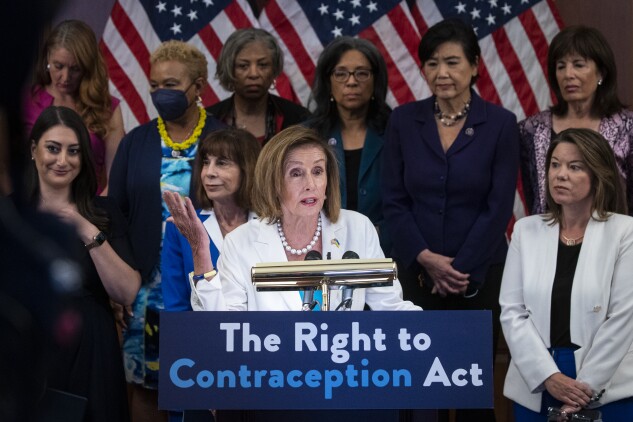 House Speaker Nancy Pelosi speaks during an event ahead of the passage of H.R. 8373, the Right to Contraception Act, at the US Capitol on July 20, 2022.
Photographer: Al Drago/Bloomberg via Getty Images

Nearly 60 years ago, the Supreme Court in Griswold v. Connecticut secured the right to the birth control pill and contraception. When the high court overturned the long-standing right to abortion in June in Roe v. Wade, Justice also suggested the court could revisit the right to contraception and same-sex marriage.

Major anti-abortion groups—National Right to Life and Susan B. Anthony Pro-Life America—said they plan to score lawmakers on their votes. Both warned in statements the bill would permit access to abortion-inducing pills.

Some states have sought to limit access to certain contraceptives. Idaho and Texas have prohibitions on funding emergency contraceptives in certain state-funded heath and family planning programs.

The Biden administration has sought to clarify that pharmacists can’t deny patients medicines they’ve been prescribed, including hormonal birth control or emergency contraception, because those people are pregnant or might become pregnant. The move was part of an effort to ensure the availability of abortion pills, contraception, and emergency medical care for pregnant individuals.

The federal legislation would guarantee the right to access birth control measures, and protect health-care providers prescribing and advising patients on birth control measures—both those approved by the Food and Drug Administration and those beyond the agency’s purview, such as tracking a menstrual cycle.

Republicans who opposed the measure say the definition of contraception is overly broad. Rep. (R-Wash.) called the bill “poorly drafted” and Thursday warned it would allow “unrestricted abortions.” She said Republicans do support access to contraceptives, but this bill would go too far.

“Contraception is different from abortion,” she said.

The bill’s prospects in the Senate are unclear. Sen. (R-Maine), one of just two abortion supporters among Senate Republicans, told reporters Wednesday she’s working with Sen. (D-Va.) on legislation to codify Griswold’s right to contraception, among other rights related to pregnancy and abortion.