Hospitals in some parts of the U.S. are already starting to see the impact of an autumn wave of Covid-19 infections, the latest sign that the health-care system still faces serious pressure from the virus, even in places that have achieved relatively high vaccination rates.

Intensive-care unit beds occupied by Covid-19 patients are climbing in 12 states from two weeks earlier, with most of them in a contiguous strip running from Arizona and New Mexico, through the Great Plains and into Minnesota. In several Western states, many doctors and nurses haven’t caught their breath from the last round of infections. 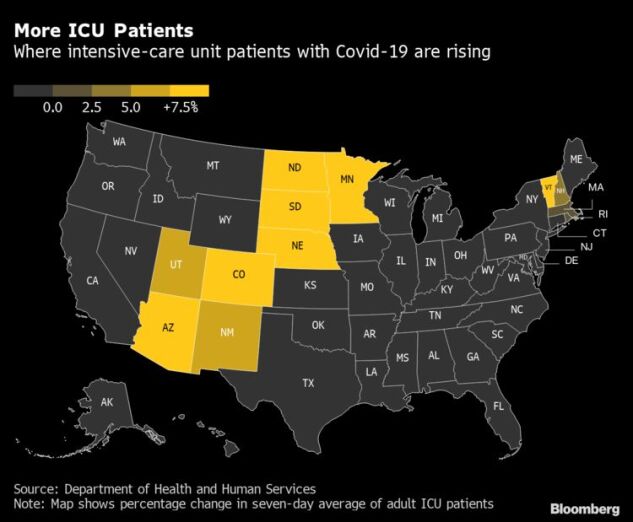 “We’ve been at full capacity and couldn’t get patients transferred” until a few days ago, said Jennifer Riley, vice president for operations at the Memorial Hospital at Craig, a rural facility in remote Moffat County in western Colorado with about 25 beds. “It’s hard to believe we are so far into the pandemic.”

The U.S. faces several uncertain months ahead, with the highly infectious delta variant still circulating as the country heads into its traditional winter virus season. Many parts of the U.S. are also experiencing unseasonably warm autumns, and many regions have yet to see what will happen when frigid temperatures push people indoors, where viruses spread more easily.

The widespread distribution of Covid-19 vaccines has shown remarkable success at keeping inoculated people alive and out of hospitals. But it’s still not clear what threshold of vaccination will relieve the relentless burden on the health-care system. New therapeutics such as a pill developed by Pfizer Inc. are bound to help, but that treatment won’t be widely available for at least a few months.

In Western states such as Colorado, hospital staff are under siege and exhausted. Many regional Covid-19 waves tend to rise and fall quickly, but across many states in the West, regions appear trapped between the summer and fall waves, and the pressure on hospitals has dragged on more or less continuously. 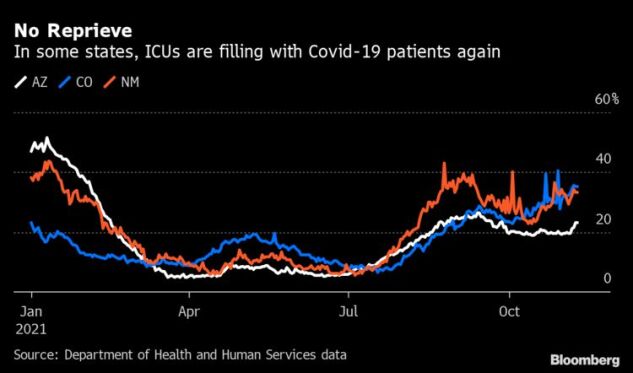 Colorado activated a “crisis standards of care” hospital staffing plan Tuesday giving the industry broad authority to fill personnel gaps. The staffing plan allows for such things as “just in time” training for employees to assume responsibilities beyond their normal role and level of certification, according to the state Department of Public Health and Environment. The Federal Emergency Management Agency has also sent medical teams to lend support.

Riley’s rural hospital has had to transfer many Covid-19 patients -- and those with other serious illnesses and injuries -- by helicopter to Grand Junction, Colorado, 150 miles (241 kilometers) away and Denver 198 miles away.

The resurgence is a warning to states elsewhere in the country.

“This is hitting Colorado now,” said Donna Wehe, director of communications at San Luis Valley Health, which operates a 49-bed hospital in Alamosa, population 9,000, in southern Colorado. “But where is it going to hit in 45 days?”

To contact the reporters on this story:
in Miami at jlevin20@bloomberg.net;
in Denver at vdelgiudice@bloomberg.net