The life science and pharmaceutical sector had the highest volume of announced or closed deals in September and the highest monthly volume year-to-date, according to Epstein Becker Green attorneys and health industry financial/investment analysts at KPMG and FocalPoint Partners. They say prolonged election uncertainty, especially with a worsening Covid-19 outlook, could create headwinds for increasing deal activity in Q4.

The volume of announced and closed merger and acquisition deals in the health-care sector in September (201) accelerated to end Q3, up from 166 in August and just shy of the year-to-date high in January (213). The surge over the past month suggests that investment activity may be on the upswing following a few months of slowed activity resulting from the pandemic. 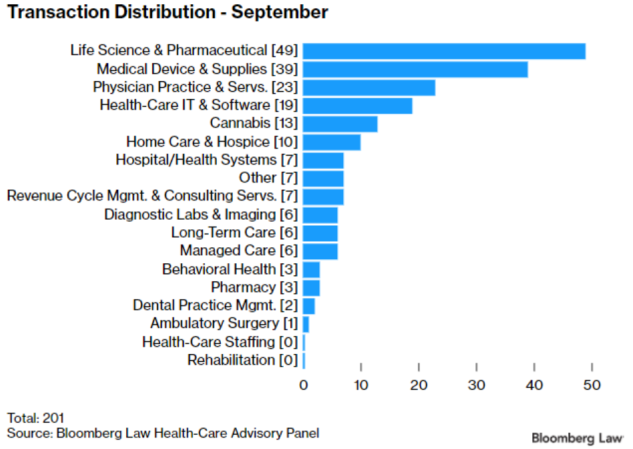 The life science and pharmaceutical (49) sectors had the highest volume of announced or closed deals in September and the highest monthly volume year-to-date. Despite recent setbacks in clinical trials for Covid-19 vaccines and therapeutics, investor interest is expected to continue to be strong for the remainder of the year as we generate more evidence on efficacy and plan for distribution of potential vaccine candidates, potentially before the end of the year. Q3 deals in the sector (103) are up approximately 22% from Q1 (84) and Q2 (84).

Medical devices and services deals, announced and closed, were strong for the second month in a row (39) to make it the highest month for the sector year-to-date. The sector has 165 announced or closed deals year-to-date, on pace to have the second highest deal volume for the year, behind life science and pharmaceuticals. Q3 (85) strongly outpaced Q1 and Q2 deals, which totaled 80.

Recent data suggests that health-care demand may be recovering, creating increasing investor interest in innovative care delivery in new or alternative settings, which must rely heavily on services in this sector.

Physician practices and services saw increased deal volume (23) from August (19). Totals for the sector in Q3 (48) increased nearly 80% from Q2 (27) as transactions increasingly have trended upward over the past two months. As patients begin moving back to traditional health-care settings, seek care that was delayed as a result of the pandemic, and as telehealth utilization begins to slow relative to earlier in the year, demand for physician services could increase through the last quarter.

These factors, along with increasing industry headwinds related to the possible risk of a second pandemic wave in the fall months, are all serving to catalyze continued M&A activity in the physician practices and services sector.

MSMOC is a leading orthopedic care provider in Mississippi, receiving 89,000 patient visits annually and more than 10,000 surgeries each year. 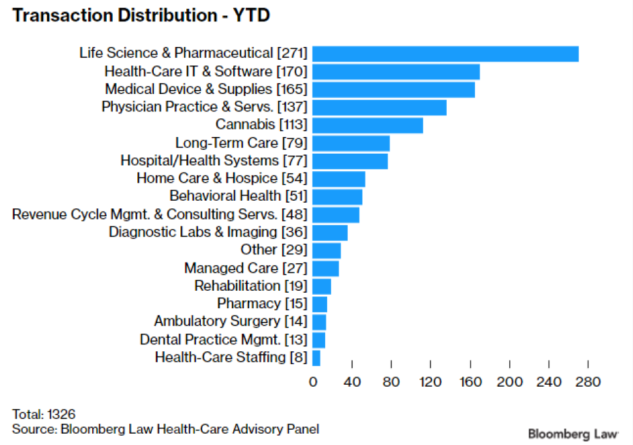 Hospital/health systems deals totaled 77 through September, with seven total deals announced or closed in September compared to only four in August. As compared to Q1 (34), Q3 deals are down nearly 35% (21).

By virtue of the recent surge in the incidence of Covid-19 cases and increasing hospitalizations across the country, there is the established expectation that cases will continue to rise as we approach the winter months. As a result, the hospital/health system sector could face increasing headwinds for the coming quarter, and possibly through Q1 and into Q2 of 2021. As overall acute care capacity is stretched thinner and thinner, we could also see a further decline in outpatient procedures and more prolonged recovery for the sector overall.

Over the past several years, several for-profit health systems have continued to divest assets that are outside their respective core strategic footprints to focus operations in a handful of more concentrated geographies. Concurrently, regionally based non-for-profit entities have been able to increase their size and scale in their local geographies because of these for-profit divesture plans.

Notably, the 480-bed Bayfront Health St. Petersburg transaction, coupled with the recent acquisition of 84-bed St. Cloud Regional Medical Center, will strengthen Orlando Health’s presence in the Central and Western Florida regions, as the provider embarks to further position it as a leader in health care across the state.

Although transactions in health-care IT and software dipped a bit in September (19), the sector is still on pace for more than 200 deals by year-end. Announced and closed deals for the sector in Q3 (58) are up nearly 33% from Q2 (44).

Although routine health-care services are increasingly moving back toward traditional health-care settings as the system becomes better prepared to reduce the spread of Covid-19, the recent increases in infections could lead to a resurgence of telehealth and other health IT services.

In addition, new opportunities for innovation are being created for new entrants to capitalize on. For example, the anticipated expedited timeline for developing therapeutics and a vaccine is also creating productivity efficiencies within the life sciences industry and health IT companies with proprietary algorithms that facilitate these efficiencies are attractive targets for acquisitions.

Cannabis announced and closed deals hit double digits for the fifth month in a row (13) bringing the sector’s year-to-date total over the 100-deal threshold (113). Totals for the sector for Q3 (40) were the highest yet, and the sector is expected to reach 150+ deals this year as deal volume has increased each quarter. All eyes are on the upcoming elections and state ballots that are introducing the legalization of marijuana.

There is a strong likelihood that results of the Nov. 3 presidential election could be unknown or at least uncertain, until days if not weeks after the election. Likewise, the outcome of the Senate elections that will determine the majority, which will heavily influence the legislative agenda of the next president, may also not be certain until well after the actual election. Prolonged election uncertainty, especially with a worsening Covid-19 outlook, could create headwinds for increasing deal activity in Q4.

A shift in the White House and Senate to Democratic, for example, could result in an increase in the long term capital gains tax rate. These types of potential changes, in addition to the overall uncertainty of the outcome of the election, is driving some sellers to close their transactions before year end.

On the other hand, a decisive victory by either presidential candidate with a Senate majority in their favor, could create tailwinds for investment activity in Q4 as investors prepare for changes that could follow with a new administration.

Regardless of who wins the presidential election, we expect the administration, along with a new Congress, will play an active post-election role in addressing the pandemic, through policies to assist with health sector recovery and perhaps further economic relief and stimulus. Further progress on Covid-19 vaccines and treatments should continue to drive investor optimism, especially in the medical devices and life sciences and pharmaceutical sectors.

Epstein Becker Green, FocalPoint Partners, and KPMG did not comment on any particular transaction or party discussed or listed in this article.